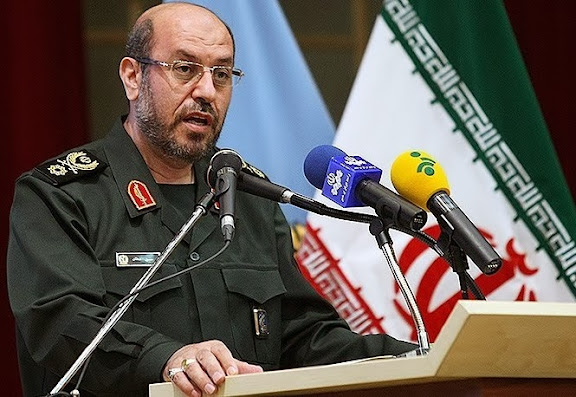 According to Tasnim News, Iran Minister of Defense Brig. Gen. Dehghan stated last Sunday he elected to postpone the public unveiling of a Fateh class submarine, pointing to delays with the ship's subsystems and infer revised MODAFL policy in public unveiling significant defense products when actually delivered and operational.

The Minister's public explanation follows on the heels of recent revelations reported by IHS Jane's on the launching of a Fateh class submarine:


Iran has launched a new class of submarine that has never been seen before, satellite imagery obtained by IHS Jane's reveals.

One of the boats can clearly be seen in the water at the Bostanu shipyard on the Strait of Hormuz in Astrium imagery taken on 27 October. It measures 40.5 m long and 4 m wide at the waterline.

A second can be seen under construction at the Bandar Anzali Naval Base on the Caspian Sea on 17 September. It is partially shrouded by scaffolding, but is approximately 48 m long and 6 m wide.

Senior Iranian officials have previously said that it is building a new class of 500 tonne submarines called the Fateh, although the timeline appears to have slipped repeatedly. In April, Deputy Defence Minister for Industrial and Research Affairs Mohammad Eslami said: "The first Iranian 500 tonne submarine will be unveiled by 31 Mordad [22 August 2013]."

While it's possible the Minister of Defense is being candid with revised MODAFL policy and technical issues, it's also possible a higher political decision has been taken in refraining from from publicly unveiling more sensitive military weapon developments while nuclear talks are underway, talks that provide the added inventive of potentially improved relations with the United States and western Europe. This could also explain the delayed public unveiling of Iran's claimed reverse-engineered RQ-170 UAV.
Posted by Mark Pyruz at 1:54 AM

Nobody gives a crap about your terrorist regime's toilet 500 ton midget submarine. If you had any kind of military you would have responded to the oil embargo with force by shutting down the strait of hormuz, as you threatened to do, and not by begging and supplicating yourself.

I am "wondering" why the authors of this website omit some important statements, facts and try to elevate part of information with a peciuliar descripions.

In the case of the above article, where It cites parts of Dehghan's statements regarding new submarine, the article omits his statements that the defense ministry would design and build new submarine right from the scratch,wuth Fateh sub-surface being the example product.

Gen. H. Dehghan has also said that "We postponed unveiling of Fateh to coincide with the time of delivery to the Armed Forces".
That decision has also economical means, because reporting will be done at the final event, which will be the submarine's commisioning with the Navy.

Gen. Dehghan in his recent statements, which included information about new submarine, also informed about very im[ortant issues that the defense ministry is focused on 4 areas, which include defense research, with the majority of defined projects underway in this area, some of 180 of which should have been realized the current year.

The second area is defense production, where we work hard to finalize projects in deterrence capability Gen. Dehghan stated.

The third area of government's work is related to service sector where we focused on provision of financial resources with priorities on health and retirement sector ....and welfare sector.

The forth area is the defense diplomacy........


And I agree that there has been an order to protect all sensitive and classified information from unnecessary disclosures, not necessarilly because the nuclear issue talks.
Recent announcement by Gen. Assadi, the commander of the Iranian eastern air defence zone, also emphazize on confidentiality of related information, when he anounced that the Air Defense top commander Gen. Farzad Esmayeeli will inaugurate implemented air defense projects.

MODAFL's timeline for public unveiling of Fateh class has changed a number of times.

Coincidentally the inferred revised policy was addressed yesterday by FARS, reporting on both the Fateh and RQ-170. Now the Fateh timeline is sometime before the end of March 2014, and the RQ-170 based UAV also without a definite date..

Moreover, the revised timelines could extend past the 6 month period identified for nuclear negotiations, which would support the possibility that a political decision has been taken. We'll just have to wait and see if this is the case.

Mark at 6:08 AM
That submarine is a top goal of enemies' intelligence efforts, to be acquinted with,....so there is a time game with unveiling that.
The enemies would like to know dimensions, which could help them to create computerized models for sonar and other means of detections.
Many submarines hide under big ships or warships during strait passages, in order to hide their noise characteristics' detection.....

I agree with your conclussions that Iran may wait for an outcome from the negotiations, because that particular submarine, however precious one, is not in "an urgrency delivery mode", as the air defense is, to significantly change the present capabilities of the Iranian military, which possess abilities to whitstand significant enemy's attacks in the long run.
The Iranian military position is also helped by Iranian vast lands and a geography of its terrain.

AnonymousDecember 10, 2013 at 9:45 AM
I have no doubt the americans do,the iranian submarine force is the most potent in the region and would pose a substantial threat in any conflict.How would shutting down the straits have profited iran?,it would only have started a regional war,its far better to leave the threat of a blockade hanging over the heads of the arabs should they ever be dumb enough to allow their territory to be used as staging point for an attack on iran

"How would shutting down the straits have profited iran?"

It wouldn't have benefited Iran to carry out its threat to shut down the straits, because it had no ability to do so, and it would have been beaten down if it even tried -- same thing applies for any other threat from that backwards military.

I'll take it your not a fan of Iran lol. Do tell.