Reaching Out to Gulf States 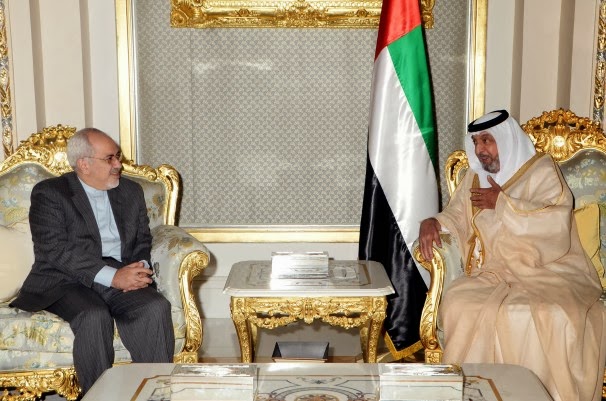 Iranian Foreign Minister Javad Zarif today arrived in the United Arab Emirates as part of a charm offensive to improve the strained relations with the Arab states of the Persian Gulf. Zarif has already visited Kuwait, Qatar and Oman during his current Gulf tour.

“Iran is taking advantage of the interim (Geneva) agreement to make inroads into the GCC to resolve outstanding issues,” said Theodore Karasik, a security and political affairs analyst at the Dubai-based Institute for Near East and Gulf Military Analysis – INEGMA. (AP, 4 December)
In UAE today, Zarif held talks with Emirati President Sheik Khalifa bin Zayed Al Nahyan in his palace in desert oasis city of Al Ain and met with the Ruler of Dubai and UAE Vice President Sheikh Mohammad bin Rashed Al Maktoum in the bustlng commercial hub of Dubai.

During the meetings, the Emirati leaders welcomed the signing of the interim Geneva Iran accord. The two sides were also expected to have reviewed the issue of the three islands, especially Abu Musa, which is under the Iranian control but claimed by both countries.

Associated Press might call Persian Gulf for whatever it wants. But Uskowioniran should not just copy the wrong name on its site without even reformulating it or giving a comment. I think you own your Iranian audience and all others who care about correct information an excuse and even a correction.

In today's world a media can be discredited within hours when not caring about its audience. I think it would be wise from Uskowioniran to follow the recommendation as soon as possible given the historic Iranian resistance towards media with poor respect for the naming of Persian Gulf.

It appears the word "Gulf" instead of "Persian Gulf" is always used deliberately in this website.

Please read the second sentence of the very first paragraph! "...Arab states of the Persian Gulf."

For your information, you only need to used the full name once, then you can refer to it as Gulf in the same story. Do you have any problem with that?

maybe you'll all agree to call it the Gulf of Esther.

Was Esther not the whore whose pimp Mordekhai caused the mass murder of 70,000 Iranian soldiers in the antic ??!! On the 13 of Farwardin ? ??
For which some still celebrate it as the feast of Purim ??

I'd say shame on you Hamadan for still not marking the grave of that bitch.

Azari By fortune ,Iranian by grace of God
Dariush London

Anon 9:00 AM
What sort of stupid comment was that? Oh,I remember now. People like you represent the types of hayvoons that consist of the present regime.Typical type of hypocrite living in London while supporting a anti-Iran dictatorship.Shame on you.

Anon 1:50 PM.......The "hypocrite living in London" has forgotten that Ali used to cut off hundreds of Iranian heads every week because he hated Iranian's like the rest of the bedouin stone loving cult.