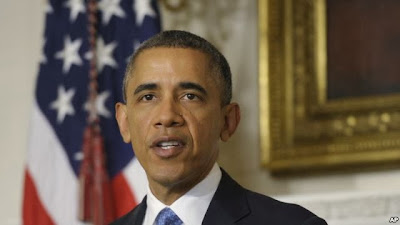 “We don't believe this proposal is necessary, as I think we have made clear, and we have been discussing with members of Congress for quite some time.  We don't believe it will be enacted; we certainly know it's not necessary.  If it were to pass, the president would veto it,” said Jay Carney, the White House spokesman. (AP/VOA, 19 December)

The veto threat came after 26 Democratic and Republican senators introduced legislation in the Senate, called the Nuclear Weapon Free Iran Act of 2013, which expands sanctions on Iran's petroleum industry.

The proposed legislation will also compel the United States to provide military support to Israel if the Jewish state takes military action against Iranian nuclear facilities. This part of the proposal practically hands over American foreign and military policy on Iran to a foreign government.

The Senate legislation is not likely to come to a vote until some time in January.

Surely Obama understands that American jews care about their brotherly nation - Israel. I don't see anything wrong with taking advantage of the US military. Israel's security is America's security. Both countries have intertwined for decades - ever since the creation of the Jewish state. US and Israel are inseparable like a pair of siblings, so it's natural that both will look out for each other.

If Iran had an ounce of sense here they would seize on the opportunity to marginalize the neocon element on congress. But sadly that's expecting way too much of a country run by imbeciles, based on their prior decisions.

I'm guessing someone will soon come and post on this page about the total surrender of Iran to Obama's veto.

I see great political will on both sides this time :)

Iran's entire willingness to continue with a nuclear deal is marginalizing the neocon element. Have you been living under a rock lately?

Some people are about to miscalculate, someone is about to start a major (perhaps WW III), do not under estimate because you never can tell the potential player in the war. Somebody has gone mad.

In other words, American zionists have more loyalty to a foreign state than they do to America.

"I don't see anything wrong with taking advantage of the US military." That pretty much sums up zionist mentality and the reason for America's recent wars and hostility to Iran.

Actually I haven't seen Israel look out for the US much lately, as a matter of fact there is one country being supported in quite an unconditional fashion for decades now, and the other answering it with the many strains it has irresponsibly put on its interests in the middle east, and not the other way around. The relationship between Israel and the US is not balanced nor mutually beneficial in any way, that has been proven quite obvious in regards to the major impediments the former has voluntarily and selfishly put on the latter's every desperate efforts at mediating a fair and durable Peace Deal with he Palestinians. And in recent times, Israel's reckless behavior in that field, including an occurrence where then visiting Joe Biden was literally humiliated after returning to Jerusalem from Palestinian territories only to witness a settlement construction package had just been validated, is quite a good illustration to that. But there has been notable and welcome improvement in America's political independence in recent times, notably via Obama's handling of the all-important Geneva deal, and quite fortunately so. Watching him finally make use of his real, most powerful presidential powers against hard-line attempts at derailing the whole thing for the sake of the Israeli far right alone and in total contradiction with both the US and the region's security through leveraging institutions their regime controls via its all-powerful AIPAC lobby, namely infamously subjugated Congress, is definitely invigorating for anyone still caring about rational and objective, mutually respectful approaches to issues. The US and Israel have nothing of a pair of siblings, not anymore at least. If anything Israel owes the US (among other countries) the very rise of American Jews within their Society after the end of WWII, the elimination of Nazism and the subsequent end of the Holocaust. The Israeli government today doesn't give two cents about America's security or standing in the Middle East, openly cursing any diplomatic resolution to a decade-long stand-off plaguing western relations with Iran, and in that regard doing everything within its power to destroy global efforts at finally sealing the fate of the issue, setting course for what is projected to become the biggest, most dangerous and destructive conflicts the region would see for decades in the process. I do not see that as brotherly conduct with its main protector, and perceive it more like a spoiled child kind of behavior. And in my opinion, in that sense, Mr. Uskowi is quite right when he puts things the way he does vis a vis the surrendering of US foreign policy if Congress was ever able to move its plan forward. Indeed, technically speaking, a foreign nation being able to decide whether a much more powerful actor (and its main ally) forcefully follows suit on its potential unilateral decisions regarding a third country at the total expense of its own core interests and associated historical efforts at safeguarding them in a viable manner, cannot be regarded otherwise as a full surrender of its sovereignty. Which it is righfully not ready to do this time. Israel can still oppose peace with the Palestinians for years to come, but its influence within the american political spectrum does not go as far as being able to stop P5+1 efforts at finally mediating peace with Iran.

the only sibling Israel has in the US is Congress and that's it. No wonder it has systematically proven to be the most unpopular institution of the country in the eyes of its taxpaying citizens for so long...

Perfect example of the Iranian mind -- give them $100 and they'll impudently demand more; take $100 from them and give back $1 and they will crow about how they gained an advantage over you. The British truly demonstrated their brilliance when they quickly gave the world the rule for dealing with the Middle East -- keep the Iranians worried and the Arabs fat and happy.

Not if they blow it. Remember Khomeini in 1982 after he had achieved a victory in battles with Saddam -- the imbecile gambled the lives of Iranian youth (given plastic "keys to paradise" of course) on total victory over Saddam -- and Saddam beat that filthy terrorist thief into submission.

The Iranian regime have historically been utter and total morons, making incredibly dumb strategic decisions, which can only be explained by their desire to alienate Iran's population from the world, so as to oppress it.

They could easily do the same here.

Anon 9:14 AM, a perfect example of the racist attitude that is fundamental to being a zionist and hasbara shill.

Anon 9:59 AM has a point here, and history gives supports his claims.

Even though I would certainly hope it doesn't end that way on this one. Both Zarif and Obama seem to be playing the "game" so far though, wrestling with the most radical elements of their respective political environments in quite an effective way. Let's just hope it keeps its current course til the very end. Iran needs to get off the grip of those sanctions and global isolation, and soon. This has to remain priority number one and rightfully seems to be so in currently influential and most pragmatic circles of governance within the IRI.

The only aspect towards which I would maybe beg to differ on the analysis above is that in my opinion, Khomeini, though deluded towards Iran's capacity to move beyond its borders considering the embargo on Iran and the international support for Saddam , was very consciously dragging its feet to reach any kind of settlement. After all, it helped him establish a then-popular Basij and more particularly set up the military wing of the Revolution, his alternate fighting force to the regular army, namely the IRGC, which certainly wouldn't ever have reached such a level of authority at the time otherwise than during a lengthy "houkoumat nezami" period that only a total war with an external aggressor could have justified and maintained for so long. Add this to the massive executions of whatever was left of a real opposition to the regime he was able to pull unpunished and unabated both in 82 and 88.

What I am trying to reach here is that, unfortunately, it absolutely wasn't out of stupidity that the regime and specifically Khomeini acted in such a bold and seemingly ill fashion, it was at the contrary the fruit of a very well-though and cynical mindset, though plagued by some delusions of grandeur at the late part of the war, I concede, generated by the country's spectacular and unexpected initial gains until 1982, but he was soon put back into reason by one of his main acolyte Rasfanjani.

The congressmen are playing a cheap and childish game. They all know well that Obama cannot and will not risk breaking the rather fragile unity among 5+1 members. - it has already been agreed that no group member would introduce any new unilateral sanctions unless IRI violates the terms of agreement.

I have attempted to post a comment to the Uskowi propaganda's article, and he has no courage to mark that it was deleted.

I am using a word - Uskowi propaganda, because he tries to portray cunning game of administration and the Congress as an effort of their good will.

This post is not mine, is based on AP's reports on Obama's veto threat. Which part of it do you find "propaganda?"

The comments on this post and in other posts on this blog, going back seven years, show that we do not delete or refuse to publish any comment based on its political stance. They are are only deleted/not published if the body of the comment in question is personal attacks on authors or other commentators. The percentage of such comments that we have not published is extremely low.

Now tell us why you believe saying Obama had threatened veto of any new sanctions is "propaganda?" A number of major Iranian dailies and news agencies also ran the story, sometimes with banner headline. I am seriously interested to know your take on it. Thanks.

Since you have stated that you are here to TEACH "students" (about Iran???), and since most of the time you have been avoiding to state your own opinion, before "the students' " comments, in addition to your avoidance to report unpleasant facts of your mentors,
Examples of your intentional ommisions are numerous and I would like to point to facts that you intentionally skipped or delayed the facts that Netanyahu said that President Rouhani is "a wolf in sheep's skin" and you use to omit important statements of Pres. Rouhani's, director Salehi or spokeswoman M. Afkham....... and elevate others....That is a form of propaganda if you pretend to be a person "concerned" about "justice"

Some authors made complaints in the past, about your techniques to manipulate postings, I can only point that you had removed, or suspended for loger period of time an article about certain massacre (Newton?) in a country of your residence.

Now I tell you why I believe that a treat to veto more sanctions is a propaganda, which can be explained that the administration decision to exclude Iran from the Geneva2 conferrence was made almost at the same time..

It would be ynteresting to know, how have you made money for ypur living??