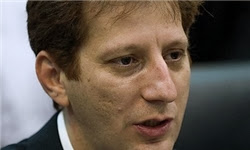 Google zanjani and larijani to see the vendetta between the larijani sect of the terrorist mafia regime and the ahmadinejad/zanjani sect.

They should all arrest each other.

well he is innocent until proven guilty and we should not assume that he was implicated in this massive fraud until proven otherwise.

I believe assuming guilty that there will be more influential people who could be implicated if he talked. So the feat taht he may commit suicide in prison as norm is with these type of high value prisoners. Remember what happened to that SAVAK/VEVAK member saiid ... that accused of being an Israeli agent in the murder of Iranian writers and misteriouisly killed himselfg with hair removal vax. The history will repeat itself.

all of his money should be turned over to Khamenei so that it can be distributed for the benefit of the Assad dictatorship and to buy the Lebanese hezzies some new rockets.

Agreed. Soon we will hear that he has comitted suicide in prison! Once he has goner the chain will be broken and they will be back to find another pawn in the chain!

Adam man your mate is arrested. What are you going to do about it?

Saeed Sakoui has something to add > http://www.youtube.com/watch?v=OQH9oaWdA0Q

If you lie,cheat,steal,rape and kill in the name of islam you will be told by charlatan mullah that you will go to heaven.This sums up the occupying terrorist regime in Iran perfectly.

AnonymousDecember 30, 2013 at 9:23 PM
No thats your good friends and allies the saudis

So you're saying that the dirty stinking mullahs don't say to lie,cheat,steal.rape and kill on behalf of islam for the likes of you to go to heaven?