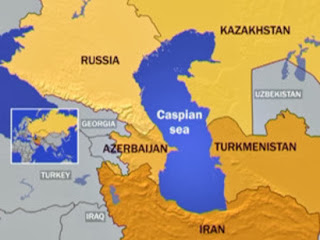 The Caspian Sea is the world’s largest lake with vast oil and gas reservoir. Iran shared Caspian resources equally with the former Soviet Union based on a treaty signed in 1921 between the two governments led by Reza Shah and Lenin.

The collapse of the Soviet Union created four new entities bordering the Caspian: Russia, Azerbaijan, Turkmenistan and Kazakhstan; each claiming equal ownership of the sea with Iran. But based on the treaty, they should have divided only the Soviet’s share among them. The division of the Caspian resources has hence become a hot political issue in Iran. The special envoy will be charged to finalize negotiations with the other four states on the legal regime governing the sea.

Another important issue is the protection of marine environment of the Caspian Sea. The pollution in recent years has taken a heavy toll on its biological resources. The Caspian is home to the world’s largest shoal of sturgeon.
Posted by Nader Uskowi at 6:24 AM

The treaty made between Reza Shah and the Soviet Union should remain,and the 50% of the Russian share should be divided.But as usaul the regime will short change Iran with Russia because they need them as so-called allies.If they can't agree with the treaty then any future regime in Iran must not agree with the treaties of Golestan and Turkmenchi.

"But based on the treaty, they should have divided only the Soviet’s share among them."

If the Shah was around they wouldn't have dared claim otherwise but since all Iran had was Khomeini and his lies about "divine" powers, his aged and incompetent military and his artist's renderings, those countries bitch slapped Iran across the face like every other country including Saddam.

Whoever drew the borders didn't quite like poor Uzbekistan. The guy arbitrarily put the ruler vertically on the map and in one stroke of the pencil ruined it for Uzbekistan.

I dont see what the big deal is...Before the breakup, the Soviet Union had to feed four Socialist Republics from the Caspian Sea Resources. Now each of those independent countries must be able to feed themselves from the same well as before. The Resources must be shared equally, it's only fair. It would be irrational to say that Iran must have the right to 50% of the resources and each of the four remaining countries get 12,5%.

Maybe it was done by a greedy Kazak! LOL