Will Visit UAE on Wednesday 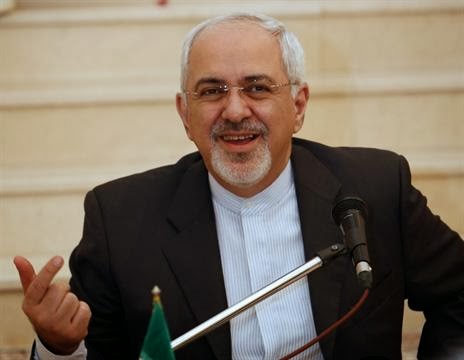 “We believe that Iran and Saudi Arabia should work together in order to promote peace and stability in the region,” Zarif said. “I believe that our relations with Saudi Arabia should expand as we consider Saudi Arabia an extremely important country in the region and the Islamic world.” (AFP/Daily Star, 2 December)
Zarif made the comments while in Doha in the last leg of a three-country tour of Qatar, Oman and Kuwait. Zarif’s current tour is part of the new Iranian government’s charm offensive to improve relations with the Arab states of the Persian Gulf, as well as the West.
“I am ready to go to Saudi Arabia, but it is just a matter of being able to arrange a mutually convenient time. I will visit it soon inshallah,” Zarif said.
Meanwhile, Iran’s Press TV reported tonight that Zarif will visit the UAE on Wednesday. The visit is to improve the restrained relations between the two countries. During his one-day official visit to Abu Dhabi, Zarif will hold meetings with Sheikh Khalifa, the President; Sheikh Mohammed, the Prime Minister; and Sheikh Abdullah, the Foreign Minister of UAE.
The contentious issue in Iran-UAE relations is the fate of the three islands of Abu Musa and Greater and Lesser Tunbs, claimed by both countries. Iran’s announcement that Zarif would visit the UAE on such a short notice could signal the readiness of both sides to resolve their disputes over the islands.

Photo credit: Iranian Foreign Minister Javad Zarif during a news conference at the Iranian embassy in Muscat. 2 December 2013 (Mohammad Mahjoub/AFP)
Posted by Nader Uskowi at 2:30 AM

It's that time of the year: a henchman of the occupying terrorist regime is about to kiss the fat noses of the Sheikhs' of Arabia. It's incumbent on all those who haul ass for the parasitical regime in occupied Tehran to pay utmost respect by paying a visit their superior counterparts in Saudi Arabia, kneel infront of them and beg for sympathy.

So because the foreigh minister of Iran is paying them a visit he's now "kissing their fat noses"? Make sense please. Kerry was in Saudi a few weeks back and no one said he's kissing anything (if anything, he was there to pressure the Saudis in favor of his agreement with Iran). You're just a anti-IR bigot who's even worse than Khamenei no matter how bad the latter is.

Iran has Saudi Arabia and the PGCC circled. We have Iraq, the Houthis in Yemen and we have bases in the Red Sea (islands where the IRGC trains the Houthis). You're an idiot to think that Iran is "kissing" anyone's nose.

If anything, Iran would ask for more influence inside the PGCC after it's agreement with the P5+1.

I'm of the opinion the three rocks in the PG represent a pretext to certain Gulf Arab States. That is to say they feel the need to point to something in order to publicly justify degrading relations with Iran, to a certain extent pushed in this direction by U.S. pressure.

With an easing of tension between the U.S. and Iran, I would expect the three rock issue to recede.

This is persian gulf not "Arab gulf"

Mr. Mollazadeh,
your sources sir please?
1)would you care to elaborate what island in the red sea?
2)what source are you quoting from claims that Iranian IRGC training any groups what so ever in Yemen? I know Saudis and Yemenis been saying that.
Houties live mostly in the mountain on the Saudi border. American drone over head. I guess the drone missed or did not notice this bunch of trainee with Kalashnikov rifle go back and forth to a remote island that is patrolled by Yemenis military. This is the government (Yemenis government) that cannot wait to get in the act like Pakistanis for some American tax payers money. Off course they must have given the trainee in that island a military escort with three martini lunches. I see however could be a coincidence that the answer time is very close to provocative comments. Next time give it a little bit of time before answer.

"Arab Gulf?" Where did you get that? You probably are referring to "Gulf Arab States."