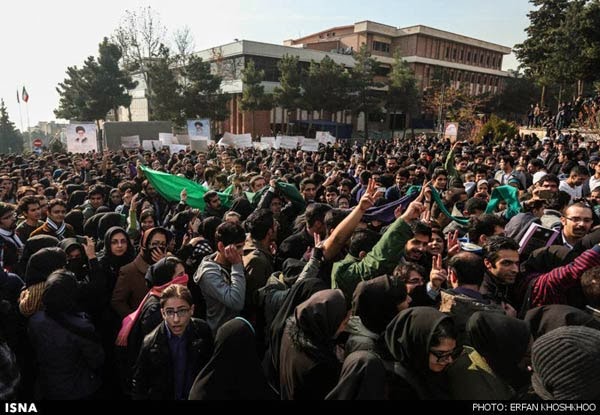 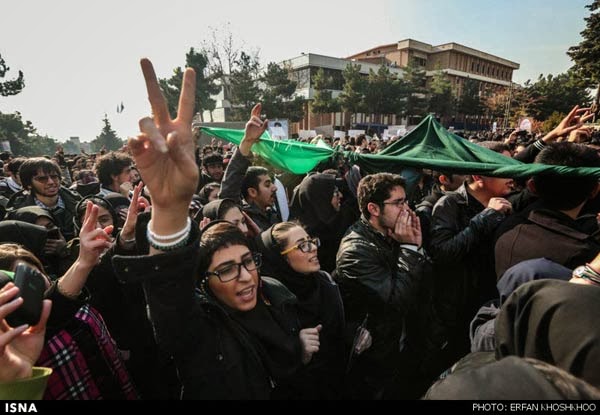 why the protester take the picture of Khamenie ?

Under Rouhani more people have been executed in the 100 days of his office than any other.As for that clown Khatami you had the chain killings. Don't these lemings ever learn or are they as stupid as they look?

No they don't and probably not in our lifetime. This nation has no culture of politics. For them anyone that gives a bit of sweet talk is good enough. You are correct what Khatami achieved! The same goes with this guy Rouhani. They are all the same face of an oppressive meaningless regime. The same goes to the Green Movement or whoever else. They are all from the same bunch but different political coloring at the surface.

I believe the issue is that there is and there was no credible opposition in Iran. If you ask in the street if these go who will replace them, there is no answer. When I was there last time in May you would see the way these people think and believe. There is really no plural thinking. All they believe is mardom parasti. Whether it is a Shah or another religious idiot it does not really matter. Rahbar knows it all and everyone else (that is 70 million of them) are sheep and followers.

So there we go what do you expect from these masses. In 21st century it is really inconceivable to find a nation that believes in religious nonsense. But here you have it in Iran. I don't think anything is going to change anytime soon, that is culturally.

Because they are idiots.

Some people NEVER learn. Unfortunately, those people have a name: Mellat-e Iran.

or they are not the protester, who the uskowi means

We may have 3000 years of written history but very little to show for it. This nation is still culturally backward as much as it is hard to accept for majority of us. We have a fantasised view of ourselves that obscures and clouds our judgement. We look down on Arabs, Pakistanis, Indians, Afghans and others but when it comes to ourselves we have very little to go about. Granted Iran has been a resourceful nation but that is all history now.

Sounds like Iranians are polarised when it comes to politics. Either they are pro-this regime or totally anti-regime at any cost. Sadly there is no shade of grey! Either it is black or white. There is little or no credit to what Iran has achieved or has not achieved. The same goes to Shah's time. There is no tolerance for another view among us. The notion that at the end "I agree to disagree with you" does NOT exist. You can see that in this forum. If one expresses an opinion different from another either he is labelled as Shah parast, or a religious bigot. Worst they have introduced another new label that is US or Zionist lover. I don’t understand what these name callings are all about. Since majority of people who log in to this forum are from abroad (they need to use VPN or another mechanism from Iran), my conclusion is that sadly our educated classes are not politically tolerant either!

I concur with you. This discussion goes beyond a simple protest. It requires sole searching, asking ourselves some frank and fundametal questions. I wisk Mr Uskowi would start a topic related to something "Iranians and what democracy means to them"

You are absolutely right.
No off the topic and relating to the relative backwardness of the Iranian culture, take the examples of personal attacks on Leo Messi (The Argentinian Football player) and Fernanda Lima (The Brazilian Tv presenter) Facebook pages by the Iranians (Granted quite a few Iranian have also apologized for other Iranians remarks) In Messi's case only because Iran is going to play against Argentina and in Lima's case because the Iranian Tv viewers could not watch the draw "because of the way she was dressed" !! (Not because of the Mullahs directive to their national TV)
This says a lot about us as a nation. Name one more country (Even in the ME where the Iranians feel that they are superior to their neighbours)
There is a long way for Iran to go to take its place among civilized countries of the world.

LOL. I checked that draw session and the way that lady was dressed up. I mean so what. That was her big night in World stage. She is entitled to dress the way she likes as long as it is acceptable. But I suppose it was a bit too much for some Iranians. I see hundreds of these so called "mutton dressed as lamb" on my way to work and back but that does not mean I should care about it.

Again it reminds us that this culture has little respect for personal choice and liberty. Think about it this way. One of the ways that one can identify how an individual is considerate and respects law is to let them drive for an hour or so and see how they observe rules and co-exist with others with consideration. I am sure most of us are familiar with the way Iranians drive. No respect to others and to the rule of law. Anything and everything goes. That is our mentality. This i a nation that claims 3000 years of civil life and still you see them driving cars and motorbikes in pavements. Some may argue that these points are trivia. However, it shows our frame of mind.

"their" and "us"!? Which is it, are you Iranian or not? It seems you can't make up your minds. hasbara shills using the plain folks technique http://www.sourcewatch.org/index.php/Hasbara , only in this case, no longer pretending to ordinary Americans but, Iranians instead.

yes i am Iranian and there it is a fascinating example of an individual who thinks everyone who has a different opinion must be a "hasbara shills". god knows what that means. A polarized indiviudual who sees the world through prisom of anti US whatever at all cost. rather dissapointing!

If you are Iranian, then I rather be a "hasbara shill" than being your countryman.

Anon. Dec. 9 7:14
It says a lot about you and your nonsense "hasbara shill" when you don't have anything of value to say about the fact that many Iranians have behaved in an uncivilized way attacking a football player (Messi) only because his team was drawn in the same group as Iran.

"god knows what that means.", yeah, right. Very revealing that you use a hasbara technique (the plain folks technique) and actually admit, that you would "rather be a hasbara shill".

Well he/she justifies his inability to use logic by labelling anyone hasbara shill or whatever. It is a self prophecy to fool himself/herself and make him/her good Anyone that talks like that is not an Iranian anyway.I identify that individual with Arabs/Palestinians.

I second that. The guy uses this silly phrase "hasbara shill" which is used by Arabs to label anything disagreeing with them as Israeli mole. There is ample example of this phrase throwm by this clamhead in this forum. There is another one on the other extreme that ends up with "terrorist regfime of mullahs" in his comments. Make you sick. When these people learn to use logic!

When these people learn to use logic!

Never. The one calling everyone else "hasbara shill" is a Palestinian Gada zadeh and the one that tangles anything about Iran to "Terrorist regime of Mullahs" is a TKO member or some spiteful bozo walking endlessly in allyways of Europe hoping for a miracle!

Dear Anon 4:37 AM
As a matter of fact,I am the one that uses the phrase "terrorist mullah regime" :o)
So what do you call a regime that steals,lies,imprisons,tortures,rapes and murders the Iranian people,a regime of saints?

I take your points.

There is no doubt that the current regime in Iran is a despicable one, on-par with the one that it replaced. However, we have to stand back and analyse it more methodically.

1) The shah’s regime was nothing to be proud of. Granted people had more social freedom that the current one
2) Shah’s regime used to torture, imprison and murder people at will as well much like the current one I am afraid
3) IMO Shah’s excesses resulted in people turning to this bunch of mazhabiouns and their religious nonsense
4) Iranian people managed to get rid of one tyranny and unfortunately replaced it with another bunch of the same calibre. The only difference is that the current regime has these masses by short and curly/bollocks so to speak because it clinches to religion
5) Shah’s regime relied on bribing people in terms of offering them certain taboos that were forbidden under normal religious practice, but it did not promise heaven. The current one does not offer anything. Unable to better peoples life it preaches shahadat and behesht as alternative! The act of desperate people. The one in Palestine etc
6) Thus the problem is not the government but the culture/religious practice which has led to the custom of people worshipping (be it Shah, Imam Khomeini, Imam Zaman or anyone else) and doroughgui (lying). It is not just the government lies to people but people who lie to people as well. Their best practice is colah bardari from each other. As much is greed is in Jews DNA, deception is rooted in our culture. So in short it is not government that has created this herd mentality but the culture itself. You can see this topic is about University students (read educated classes) supporting Khatami and Rouhani and then you can draw your conclusion!

yes dream on man. If you are so brainnwashed to believe that any fair comment is anti-Iran, zionist comment then there is no hope for ablah like you (BTW I trust you at least understand what ablah means in your language. It is plain enough for you).