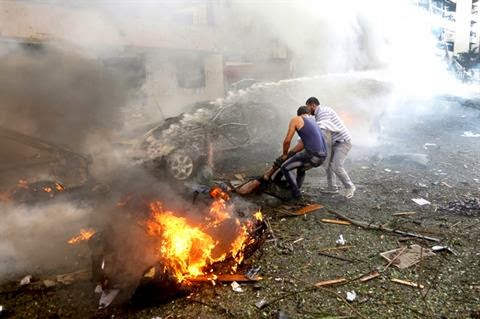 Hezbollah chief Hassan Nasrallah today accused Saudi Arabia of being behind the twin suicide bombing near the Iranian embassy in Beirut. 12 people, including an Iranian attaché, died in the bombings.

Nasrallah said he was convinced the Lebanon-based Al-Qaeda-affiliated group Abdallah Azzam Brigades, which has claimed responsibility for the bombings, has direct links to Saudi intelligence. He did not provide any proof.

Nasrallah made the comments during a TV interview with OTV.

“We believe the Abdallah Azzam Brigades’ statement about the bombing ... this is a bona fide group that has a Saudi Emir and its leadership is directly linked to Saudi intelligence,” Nasrallah said. (Daily Star, 3 Decemebr)

The two suicide bombers, a Lebanese and a Palestinian national, were both residents of south Lebanon.

Following the attack, Hezbollah and Iranian officials blamed Israel for the bombings. Nasrallah did not explain why he has changed his mind and now blame the Saudis.


File photo: Lebanese men remove a dead body from a burned car, at the scene where two bombings struck near the Iranian Embassy in Beirut. 19 November 2013. (Hussein Malla/AP/Daily Star)

One thing the Iranians can't but notice is that during the lead-up to important nuclear negotiations with the West, the country is the targeted for terrorism. Some of their leadership have made public comments to that effect.

and targeted on merit.

terrorism, like karma, is a bitch, fanboy....... and Iran is reaping what it has for so long sown in Beirut.
when you look at the ruins of the embassy, remember to thank Khomeini.

AnonymousDecember 4, 2013 at 2:19 AM
So what does that make you then,someone who gloats over an act of terrorism,hmm?

Mark knows this that's why he lives comfortably in the U.S. protected by our nation's taxpayers and military.

Anon 7:26 AM.......Correct,it's called hypocracy. It's the type of thing all supporters of the islamic terror regime practice by supporting occupying terrorists and living comfortably in the West.

and now someone shot to death one of Nasrallah's buddies and hezzie bigshot Hassan Fakiss and the hezzies are bleating that Israel is to blame.

but really it's the murderous ways of Khomeini and the puppies of that old dead dog being visited upon them.

AnonymousDecember 4, 2013 at 11:36 AM
As opposed to a pro western pro terrorist hypocrite like yourself,where do you live?,not in iran I bet