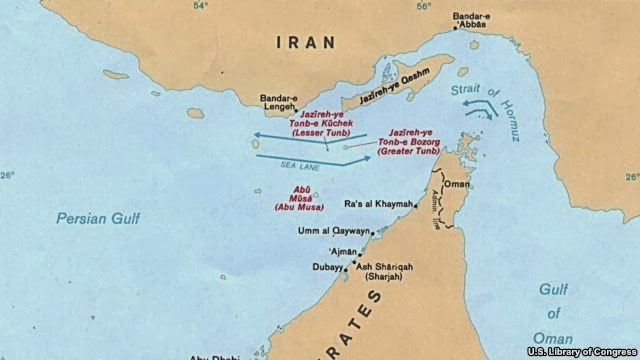 Defense News reported today that Iran and the United Arab Emirates are close to reaching a deal on the three islands of Abu Musa and Greater and Lesser Tunbs. Both countries maintain historical claim over the islands, strategically situated at the mouth of the Persian Gulf, close to the Strait of Hormuz

The islands came under the Iranian control upon the departure of the British from the Gulf in 1971. Then the Shah’s government agreed to drop Iran’s long-standing claim over Bahrain in return for the islands. A memorandum of understanding was agreed upon by Iran, the British, and the Trucial States, which included the present-day UAE. Iran occupied the islands two days prior to the British departure from the Gulf.
The Emiratis claim that the agreement with the British was signed before the formation of their country and hence not valid. On Abu Musa, the agreement called for joint administration of the island with Sharjah, now part of UAE. But Iran has been administering the island on its own.
Defense News, referencing sources close to the negotiations, reports that a deal for the return of the islands to the UAE was laid out during the recent visit of UAE Foreign Minister Sheikh Abdullah to Tehran, and a response was presented during last week’s return visit by his Iranian counterpart, Javad Zarif.
Theodore Karasik, director of research and development at the Institute for Near East and Gulf Military Analysis (INEGMA), said the two countries are on the verge of a breakthrough.
“Sheikh Abdullah’s visit to Tehran focused on the islands issue, and the Iranian side reacted positively,” Karasik said. “Iranian Foreign Minister Zarif quickly came to Abu Dhabi to meet with (UAE) President Sheikh Khalifa bin Zayed Al Nahyan and meet with other senior leaders to further cement a workable agreement for the transfer of the islands to the UAE while Iran retains the seabed rights.” (Defense News, 10 December)
However, Zarif has publicly insisted that Iran is only ready to discuss “misunderstandings” surrounding the implementation of 1971 memorandum of understanding over Abu Musa. Some hardline politicians in Iran though have started accusing Zarif of betraying his country without mentioning the three islands. UAE’s Sheikh Khalifa is invited to visit Iran. It is expected that the visit would only take place if an important announcement on the three islands were planned.

The god damn UAE didn't exist in 1971 ! Therefore there should be no "deal" with the sand bedouins. If the IRI do a "deal",then all newly discovered oil and gas fields must be shared with these playboy sand bedouins.

politically is a suicide for not just Zarif but for Islamic Republic to even share the administrative issues with UAE. I think this is cheap journalism.

what next? shah gave away Bahrain. now they are giving away these islands. And why not call Persian Gulf "Camels Gulf" for a change and rename Khuzestan as Arabistan to please Arabs and their master USA for the sake of being allowed to enrich Uranium to 3% by the Arabs' masters! It is a bargain

Iran has plenty of landmass. Just hand over the ownership of the three islands already. It's not worth staying on this head-on collision with the GCC. Besides it's difficult to defend these islands in a military conflict, both on logistical grounds and because of zero strategic depth. Each Island as only a single line of trench, which extends all the way around, on the edge. It's all over once the adversary lands a relatively sizeable force on each of the Islands, after that it's all about quickly eliminating any remaining resistance . I have no doubt about the GCC's eagerness to exploit the opportunity that a future conflict, between the U.S. and Iran, could bring.

This better not be true. Period.

I doubt that the Iranian government is ready to hand over the three islands to the UAE, it would be a political suicide. There seems however that something going on with Abu Musa, a deal on joint administration? Even that would be tough politically for Iran.

It was expected that the three islands would be on top of agenda in the foreign ministers meeting, as I had said when Zarif decided to go to UAE on a day notice. This report by Defense News is their understanding of what was agreed to. We need to wait to see the reaction by the Iranians before making stipulations that the deal is done.

Some logic you have! I just hope your style of thinking doesn't go through the corridors of power in the IRI.

Are you trying to say that Iran can't defend these islands from a sand bedouin attack? Or lets just simply role over for the west before they (might) attack? And on a more important note,it may have a "zero strategic depth" but haven't you thought for one minute how important these islands are for oil and gas exploration around the islands waters that are under the control of Iran? And by your logic why bother defending Khuzestan during Iran Iraq war and simply hand over land to Iraq and call it Arabistan?
So my answer is to the "GCC's eagerness to exploit". If they want it,come and get it !

This regime was put into power to destroy Iran.They destroyed the economy and impoverished the nation to get it prepared for the oil companies to move in and rape Iran for another 30 years.And now these traitors are giving away our lands to satisfy the west. What next,the break up of Iran?

Anon 6:10.........Didn't the Qajars use that logic? To give away Iran's landmass for a few useless shekels? And by the way who the hell cares about the GCC playboy club.

Iran giving away these three islands is about as realistic as Britain giving away Falklands. [Anon above: so you're saying it'll take 150 years for UAE to get 'em?]

But if some kind of agreement can be reached, so much the better in the opinion of this non-resident of Iran.

Mr. FM donot overact for the sake of charm offensive, If you compromised on three islands with UAE, it will be biggest political error in the history of modern Iran. Sovereignty of nation never not be part of any kind of discussion while easing the tension with any of the nation. In comparison with rich Persian civilization UAE is pile of dust not more than that. If any of such move even think, will be shameful for Shia community across the globe.

What do you care? You don't even live there.

You are seeing abunch of lying thieves forced to beg. Enjoy it.

As Margaret Thather put it famousely (actually she was correcting her foreigh secretary Francis Pym) during Flakland conflit that sovereignty “is NOT negotiable. Period!”

The same goes in here. The sovereinty of these Persian Gulf islands is NOT negotiable.

According to press TV Iran has denied this nonsense and I quote:


“Greater Tunb, Lesser Tunb, and Abu Musa are inseparable parts of Iran and repeating baseless claims about the three Iranian islands will have no impact on historical facts,” said the Iranian Spokeswoman on Wednesday"

OK that puts a nail in the cofin of sand Arabs getting hold of these islands!. Talk is cheap!

The government is not prepared for the blowback that will occur if this is true. There isn't a hole deep enough, or far enough for them to crawl into. Let just say the blowback will be biblical in proportion. The only peace that will exist after that will be "Roman peace."

How you know where do I live? Are u working for NSA?

Keep up the good work.

What are you going to do about it?

Blowback from who? From expatriates who fled the country rather than live under the terrorist regime? I dare you to go back to Iran and challenge the government on ANY issue.

Shah didn't give away Bahrain because Bahrain wasn't Iran's for 200 years after the departure of Nader Shah's forces.You might as well blame the Shah for the loss of Turkmenistan and Azarbiajan under the Qajar's rule.

That is true. Bahrain while considered by the locals and the people of Iran as part of Iran was not under Iranian administration. However, when the Brits withdrew from the Gulf they wanted Iran to give up its "right to lay any claim to the Islands", which harmed the reputation of the Shah personally as well as his team among both Nationalists and Religious Followers with regards to the Shahs relationship with the people of Iran. There was a phoney poll taken, not even a verifiable vote that the people of the Bahrain wanted Independence. That insulting act of producing a fraudulent poll added insult and a feeling of disgust towards the British Government for the injustice of deceitfully stealing Persian Bahrain and the feeling has not disappeared since that time.