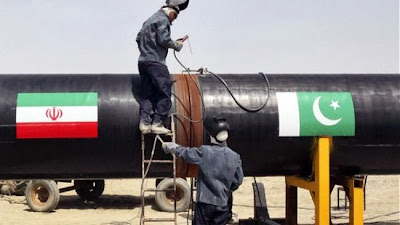 Iran said it would not be able to finance the Iran-Pakistan gas pipeline project, Pakistan's Minister for Petroleum and Natural Resources Shahid Khaqan Abbasi told reporters in Karachi on Thursday evening. (Platts, 13 December)

Abbasi who was on a visit to Tehran on 8-9 December said Iran could not provide the funding it had committed earlier for $500 million to build Pakistan's portion of the gas pipeline.

“However, we are committed and will make the IP gas pipeline,” Abbasi said, adding that Iran was ready to supply the gas once the pipeline is completed. (Platts, 13 December)

Iran has already invested $2 billion to build its part of the pipeline.


Pakistan, however, is finding it tough to find the funding for its part of the pipeline due to existing U.S. sanctions against Iran.
Posted by Nader Uskowi at 6:04 AM

About fu#king time,if the pakistanis are too stupid to realise the great deal they are being given then let the saudis and americans pay for pakistans energy needs,if the pakistanis really want this they can come up with the cash or they can just do without.

The entire iranian economy consists of taking something or of the ground and selling it - something the British created for them. What a pathetic backwards toilet run by thieving imbeciles

Pakistan is a puppet country-this is the reality!.-

@finding it tough to get the funding for its part ! -this is what they mean " FIND it BAD to annoy our masters in Washington and our partners in RIYADH!.

It makes a difference from thieving zionists living off billions of American taxpayers money every year.

Pakistan can deliver iran 20 nuclear warhead in secret and Iran funds the pipe. I think it would be fair.


Eighteen gas pipeline workers, most of them Iranians, have been shot dead north-east of Baghdad, officials say.

Security sources confirmed to the BBC that the 15 Iranians and three Iraqis had been working on a gas pipeline to run between their two countries.

The attack happened near the city of Baquba. The sources said it took place in a predominantly Sunni area.

should Pakistan deliver 20 nuclear weapons to Iran, the explosions couldn't be kept a secret.

It is a beneficial and correct decision, and cancellation of other foreign fundings should be expected......

But you know france & usa kept it secret when they gave israel their nuclear warhead in the 1960's.

the Israelis weren't given any warheads, silly person. they built their own. what they got was some radioactive material.

And people in glass houses should not throw stones, "pal".