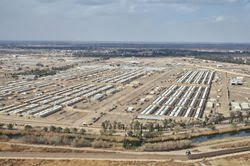 The director of Iraq’s civil aviation administration reported that three rockets landed today at Camp Hurriya (Liberty), near Baghdad international airport, and home to some 3,000 members of an Iranian militant group in exile, Mujahedeen Khalq (MEK). Three MEK members were killed and more than 50 injured.

Last September, an armed group, believed to be under the direction of the Quds Force, IRGC’s special forces in charge of Iran’s extraterritorial activities, massacred more than 50 unarmed MEK members living in Camp Ashraf, near the Iranian border. Seven members of MEK were also abducted from the camp and it is feared they were taken to Iran.

The National Council of Resistance, the umbrella non-military arm of MEK, said today that “dozens of missiles” landed at their camp. (AFP, 27 December)

In Washington, a State Department spokesperson condemned the attack and called on the Iraqi government to ensure security for the residents of Camp Hurriya.

UPDATE: An armed Shia militant group calling themselves “Al-Mukhtar Army” has taken responsibility for the rocket attack on Camp Hurriya.

I THINK it very easy to assume or to 'believe' that the Qud's force was involved in that operation in September!-Im among those who took time to study the graphic pictures of the victims of that horrific incident at camp ashraf and i can conclude that it has more to do with Iraq than Iran!.
it is very sad indeed that you are among those who willingly 'fear' the seven members were abducted to IRAN without any tangible evidence!.

"More to do with Iraq than Iran." Could it be a QF-directed operation carried by Iraqi Shia militants (or terrorists, if you will).

I do not accept fear willingly. My familiarity with the subject throughout these years and how it operates are the main factors in my suspicion.