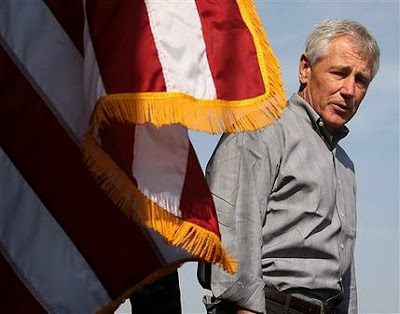 Standing on the massive deck of the Navy's USS Ponce, U.S. Defense Secretary Chuck Hagel said the United States is entering the new nuclear pact with Iran “very clear eyed.” Hagel added that it remains to be seen whether Tehran is serious about keeping its nuclear development peaceful.

Referring to the next six months when the interim agreement will be in force, before a final deal could be worked out, Hagel said the time span presents a “very wise opportunity” to gauge Iranian intentions.
“(The next six months) present a very wise opportunity to see if the Iranians are serious about following through with commitments they have said they would make about not developing their nuclear capabilities,” Hagel told a crowd of Navy sailors and civilian mariners on the Ponce, which was docked at the U.S. base in Manama. (AP, 6 December)
“We are not going to change any of our military posture in this area or any part of the world during that six-month period. We will keep the same kind of strong assets, the same exercises, the same partnerships, the same focus on our strategic interests as we did before we entered into this six month period,” Hagel added.
Hagel’s visit to Bahrain comes less than two weeks after six major powers and Iran signed the Geneva agreement, practically freezing parts of Iranian nuclear program in exchange for some relief from sanctions.
The Ponce, which Hagel chose to use as the venue for his speech, was a former amphibious transport ship that was retrofitted to become a floating staging base. Its key ability is to provide a base for special operations forces that can then be quickly deployed into the region.

Navy has concluded that the Ponce has been a successful experiment, and have ordered the construction of four new ones at a projected cost of more than $2.1 billion. The first, called a Mobile Landing Platform, has been delivered to the fleet and the second MLP is under construction. (AP)

Breathing fire for nothing!!
-tired donkey!! -playing in the hands of the forces who resist dialogue!.

There is no dialog with Iran, there is a dialog with Putin who is the slave owner of Khamenei : )

No more running away from its obligations. The terrorist regime in occupied Iran is cornered and is cowering. They know what awaits them if they break the rules.

"Standing on the massive deck of the Navy's USS Ponce,", just brilliant. A perfect innuendo, for those who know the English meaning of ponce.

I guess you should know the meaning of it. Since you are living freely and in comfort in good old London town.

Mr. Hagel should read recent statements of the former Iranian FM and present director of the IAEO Mr. Salehi, who has stated that the Islamic Republic has a "red line"...,stated by its Supreme Leader, regarding nuclear enrichment rights.

Mr. Salehi has also stated that "If they (the West) wish us not to have such a reactor (the Arak), this means that they have NEVER BEEN WILLING to see our nuclear case go back to normal track".

Who said that they are living in London? Not me. By the way, the name of that city is just London. There is no such city called "London town".

the US IS willing to see the Iranian government go back to something normal rather than the insane reactionary one that currently oppresses the Iranian people.

after that happens, things will become normal in short order.

"insane reactionary one" a perfect description of the zionist regime, especially under its current leader, the international laughing stock nutty nutanyahoo.

as much as I despise Netanyahu, he's far more respectable than the little asshole Ahmadinejad and far more respected than is the dead fanatic murderous creep Khomeini.....

"respectable"!? Who to? The kkk or neo fascists. zionists don't even know the meaning of the word respect.

There's nothing respectable about someone who presents a cartoon bomb to the world.

one would say that there's nothing respectable about a regime and a nation that would have a cartoon of an ignorant bigoted idiot such as Ahmadinejad twice allowed to win election to high office.

Ponce, that's a classic! What next? The USS Poof and USS Nonce?