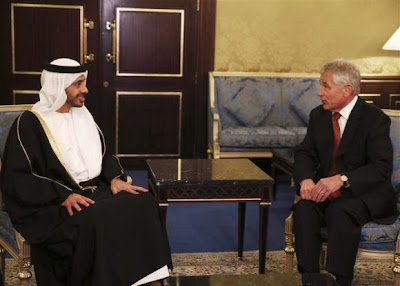 The United States has a proven and enduring commitment to Middle East security, backed by diplomatic engagement and a fierce array of warplanes, ships, tanks, artillery and 35,000 troops, Secretary of Defense Chuck Hagel said during a major speech at Manama Dialogue, a regional security forum in Bahrain today.

“We know diplomacy cannot operate in a vacuum,” Hagel said. “Our success will continue to hinge on America's military power, and the credibility of our assurances to our allies and partners in the Middle East.” (Reuters, 7 December)

Hagel's remarks came at a time of heightened uncertainties and tensions in the relationship between Washington and its longtime Gulf Arab partners. Leaders in the region are worried the United States will lose focus on the Middle East.

Hagel said the interim agreement the six major powers reached with Iran over its nuclear program had “not diminished our focus on the challenges posed by Iran.”

“Iran has been a profoundly destabilizing influence, and a nuclear-armed Iran would pose an unacceptable threat to regional and global stability,” Hagel said. (Reuters, 7 December)

Hagel added that the accord “bought time for meaningful negotiation, not for deception” and that U.S. diplomacy would ultimately be backed up by the military commitments and cooperation it has with regional partners.

To underscore the scope of the U.S. security commitment to the region, Hagel outlined the array of American military forces in the area, including more than 35,000 military personnel “in and immediately around the Gulf.” Included in that figure were 10,000 Army soldiers with tanks, artillery and helicopters.

He said the United States has deployed its most advanced fighter aircraft in the region, including the radar-evading F-22.

More than 40 Navy vessels patrol the waters nearby, including an aircraft carrier and its supporting warships, Hagel said. U.S. Navy ships have steamed through the narrow Strait of Hormuz at the mouth of the gulf some 50 times in the past six months in the name of ensuring freedom of navigation.

"“Iran has been a profoundly destabilizing influence, and a nuclear-armed Iran would pose an unacceptable threat to regional and global stability,” Hagel said. (Reuters, 7 December)"

Well, ùaybe Mr. Hagel needs a fresh reminder of how Iraq, a stable country and government (albeit a dictatorship, like many of America's current GCC allies of which it also support cracking down on dissent like in Bahrain and Saudi Arabia, but that's another subject) was utterly destroyed on every level of its society and its national fabric torn apart in a massive shock & awe campaign in 2003, followed by one of the longest and deadliest american occupations of a foreign state since Vietnam, that turned it into yet another Al-Qaeda den ripe for sectarian war-zones currently provoking a thousand death a month supposedly in "peace time", and feeding a constant influx of fundamentalist fighters destabilizing every neighboring country whenever possible, Syria and to a lesser extent Lebanon, being the latest iterations of their "jihad internationalism", against which they tried to do the very same through Tomahawk diplomacy to the very last minute, if it wasn't for a catastrophically unfavorable geopolitical context and home-front. He might well be the last person in the region able to lecture basically anyone on the virtues of security commitment.

The blatant and insulting double-standards emanating from his bold and self-inflating speech really is a pain to witness. I can't imagine being one of the million Iraqi families having recently lost someone either to a US Marines or a terrorist act. Now of course that doesn't excuse either Iran's, or Russia/China, the GCC or Europe's opportunism in meddling in that whole situation at the expense of local people based on their interest (just like America does, in fact, being no different from any other country caring first about its own agenda, contrasting only in its much greater , though waning, power to do so) but still, he is the one self-proclaiming some moral high ground in regards to everybody else involved regionally, while we know from the mouth of a whole spectrum of the American press itself that the country has badly lost it in the face of the world two times already, the Syrian debacle being the most recent example, and the 2003 criminal war based on a pack of WMD-related lies being some sort of introduction to a new era of rogue hegemonic behavior that seems to be fortunately, finally loosing some momentum, the P5+1 interim accord being one proof, notwithstanding the despicable contempt Mr. Hagel seems to have towards it, barely being able to hide his disappointment to this de-facto brake to any immediate justification to a military scenario.