Kerry Says Time is Running Out for a Peaceful Solution 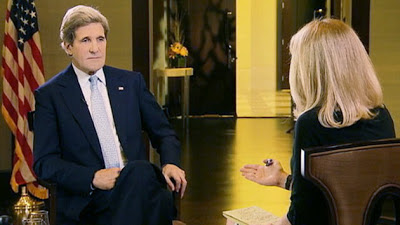 U.S. Secretary of State John Kerry said today despite the continued diplomacy and tough sanctions being leveled against Iran, the regime continues to get closer to possessing a nuclear weapon.
“Lines have been drawn before and they've been passed,” Kerry said. “That's why the president has been so definitive this time. This is a very challenging moment with great risks and stakes for everybody because the region will be far less stable and far more threatened if Iran were to have a nuclear weapon.”

Kerry made the comments during an interview with ABC News' Martha Raddatz in Qatar.

The secretary added that despite last week's negotiations in Almaty between the United States, its allies and Iran, which he called “useful,” time for Iran to cooperate is running out.

“If they keep pushing the limits and not coming with a serious set of proposals or prepared to actually resolve this, obviously the risks get higher and confrontation becomes more possible,” Kerry said. (ABC News, 5 March)

Is Kerry doing more these days than just getting his "Ticket Punched" ???

Looks like the world lost another scumbag a few minutes ago....Hugo would have made a great Mullah....LOL!!!

Here we go again.LOL.Kerry is just another Zionist poodle.

Has the NIE been revised? Last time I checked the consensus view of our American intelligence agencies stated Iran didn't have a nuclear weapons program.

Kerry cannot possibly know wether or not Iran is intent on making a nuclear weapon. What he should be saying is that Iran is getting closer to the break-out option, where many other nations already have gotten to since many years past without actually going further to make a nuclear weapon. There's no conclusive evidence that Iran is gonna build an atomic bomb.

Great question. We can not know, but if it has been revised, it has not been made public.

Plenty of evidence if you know where to look and examine in detail.
1.Iran has one nuclear power station,its uranium is supplied by Russia.
2.Iran has several uranium enrichment plants that are enriching uranium
but there isn't a single power plant that has been built for this amount
of uranium.
3.Iran has built Arak a 40MW plutonium plant that requires heavy water plant.
This plant can produce two to three bombs a year.
4.Parchin a military facility has been known through spy satellites to conduct
nuclear bomb type tests because of the layout and type of buildings.
4.Lastly ballistic missiles.Iran hasn't invested billions of dollars in this technology so that the missile can deliver flowers.These types of missiles are known for one purpose only,nuclear delivery.If you read that they have increased the accuracy and explosive yield of warhead that is just cover.The fact remains these missiles are for nukes.Big giveaway by itself.

Have a lollipop and save the chaikhaneh dribble for a rainy day!

KERRY IS AN ALARMIST, AND TRUTH IS NOT WITH HIM!!.

Reading His words ,one can see for himself how the The U.S secretary of state has changed in a very short time!!.
But is He truthful in his words ?

QUESTION ONE
can the good Secretary satisfy his audience how near IRAN is to the weapon and just what source does HE RELY ON!. .The world can not RELY on a politician like Kerry on such a sensitive matter that touches ON global security and yet everyone knows through the NIE that Iran is pursuing nothing like nuclear arms!

QUESTION TWO
he says lines have been drawn before and have passed!-CAN HE be generous enough and tell the world which are these lines and when were they passed and crossed and who noticed!!.-seriously it is such leaders with forked tongues that threaten humanity issuing political statements out of technical matters that run counter to positions reached by experts on those issues they poke their nose into!.

QUESTION TWO-
IT has long been suspected that some mandarins in the US government machine in partnership with the GULF stooges reap great harvests from the sanction on IRAN at the expense of the global and US economy in particular!.is he saying these alarmist words to scare the Arabs into ordering more f/16s,or is he putting pressure in the IRANIAN regime JUST to bull them to submission?-

the NIE is there for all to see-but KERRY is nobody but a political animal with political blood running profusely in his veins ,hence He shamelessly oversteps the general consensus OF the US intelligence community[ON IRAN] to scare the ARABS!!.

Yet more propaganda from the American regime. The world has heard all of this talk before, regarding Iraq. Maybe American politicians have not heard of the story "THE BOY WHO CRIED WOLF".

In Islam according to B.M.A Three is not Halal.

There is no such thing as an "American regime" you moron.But there is such a thing as an Islamic regime just like the one in occupied Iran.

What powerful arguments the American propagandists have when they have to resort to personal attacks!