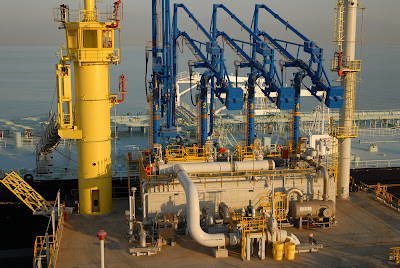 Iraq’s Kurdistan Regional Government (KRG) defended its barter trade agreement with Turkey signed on Friday. Ankara-based Genel Energy will be the first Turkish company to ship oil directly from Kurdistan to Turkey through a pipeline under the agreement between the Turkish government and the KRG.

The development has far-reaching geopolitical implications. Turkey with its vibrant economy lacks energy and is increasingly dependent on foreign oil imports. The autonomous Kurdish region is oil rich but landlocked. With the agreement with Turkey, it can now ship its oil directly to its neighbor through pipelines. Turkey can be guaranteed that its energy needs are met for the foreseeable future, and Kurdish autonomous government can ensure its economic independence. A Kurdish-Turkish alliance could be a potential geopolitical game changer.

File photo: Oil from Kurdistan could be shipped directly to Ceyhan marine terminal in Turkey. (Iraq Business News)
Posted by Nader Uskowi at 8:31 AM

It is hard to see how this deal could not run into all the usual problems, delays, cancellations and geopolitical machinations that all pipeline deals in this region inevitably run into. If only signing an agreement was some kind of guarantee that a project would actually come to fruition. It is even harder to see this one actually working with PKK actively fighting the Turkish military in the very area the pipeline is meant to run through. This has about as much chance of succeeding any time soon as the Iran-Pak pipeline. This pipeline deal smells more like a move by Turkey to widen the split between the two opposed Kurdish camps (PUK and KDP) and simultaneously widen the gulf between the Kurdish autonomous region and the Shia dominated central government of Iraq; thus effectively keeping all of Iraq weak and unstable. Its seems like a classic divide and conquer move by Turkey in the midst of a Syria regime-change policy that has stalled; so why not try to drag the whole region into choosing sides, including the Kurds. Furthermore its amazing to me that two political entities could sign economic agreements while one actively bombs and tries to kill the people of the other (not to mention has spent decades actively denying them their rights, culture and language). The Kurds have no real allies in the region or the world, only those who try to exploit them for their own gain, and thus I contend that there is unlikely to be any Kurdish-Turkish alliance or geopolitical game changing resulting from this one pipeline deal; apart from the further destabilization of Iraq and the whole region. I hope I am wrong here, but the history of this region has given me little cause for optimism.

An oil pipeline in itself will not have geopolitical implications, but a Turkish-Kurdish deal whereby Kurdistan supply Turkish energy and Turkey would in turn guarantees its autonomy will be huge, with many geopolitical implications. It will not happen overnight, but all the signs point to an exceedingly warm relationship between Barzani and Ersogan. I believe this is a strategic move on both sides.

Of course, the Turks have their own very serious Kurdish problem. Any long-term relations with Erbil need to take that fact into account. Erdogan is much more likely to move toward normalizing relations with the Kurds than his predecessors. Turkey is growing very rapidly. It needs to resolve two issues: Oil and Kurdistan. Ankara-Erbil alliance could help doing both.

There are many sources of oil and gas for Turkey, but there is only one Kurdistan autonomous region. Thus oil profits are not really a sound foundation for the building of future international relationship, especially when considering the decades of cultural repression of Kurds by Turkey and the bloody and ongoing conflict between them. Furthermore if Barzani makes a deal with Erdogan then what do the PUK and PKK do? Also would it not increase the risk of open conflict with Baghdad? You did not propose an answer these questions. Also you say that it will not happen overnight and will take time, but Erdogan is mean to be an elected official in a democratic country; will he and his government will be ruling Turkey for ever and can thus guarantee the continuation of good relations with Barzani based on their good rapport alone? I do however agree with you Nader that this deal is a calculated move and part of a larger strategy by Erdogan to redraw the geo-political map of the region in Turkey's favor, but one that is unlikely to meet great success. As for the Kurds, the long-term benefits of such a geopolitical shift are dubious at best (all Turkey is offering them is a promise not to invade them in Iraq Kurdistan, a position that is easily retractable). Lets not forget Erdogan also had a good personal relationship with Assad in Syria before the opposition uprising; by your own standards Barzani should be considered a thug no better than Assad, who is to say he won't be next on the Erdogan's hit list should the relationship go south. But lets not get carried away with the hypotheticals, a pipe dream is just that...