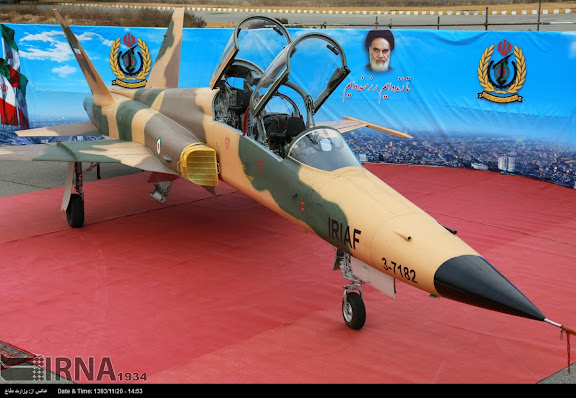 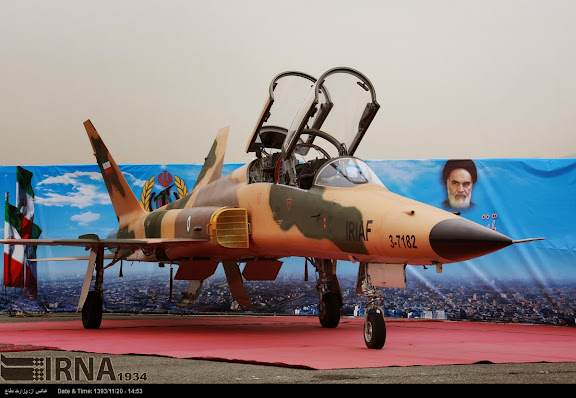 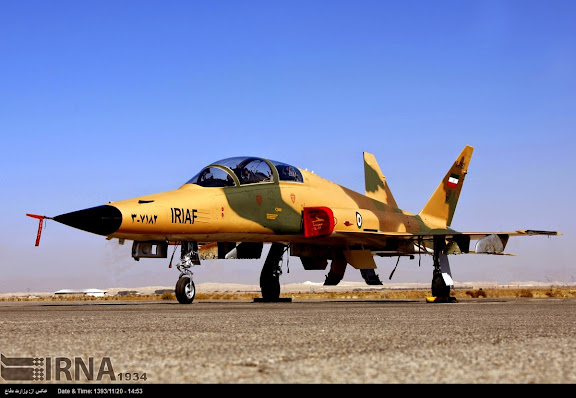 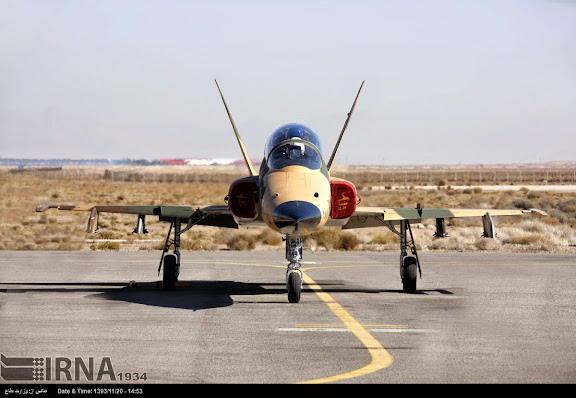 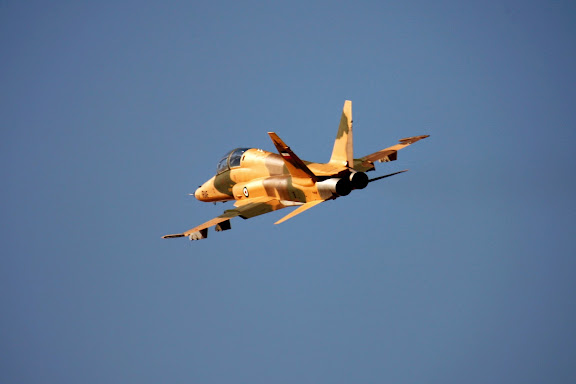 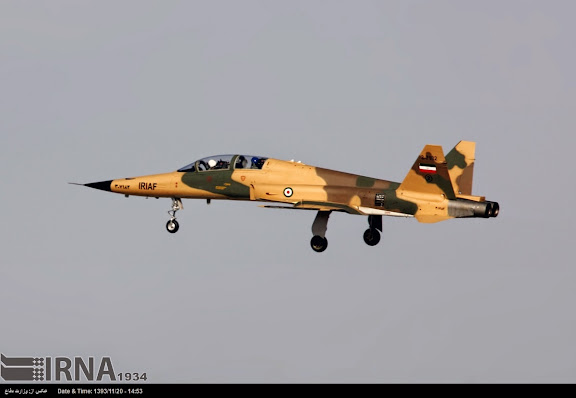 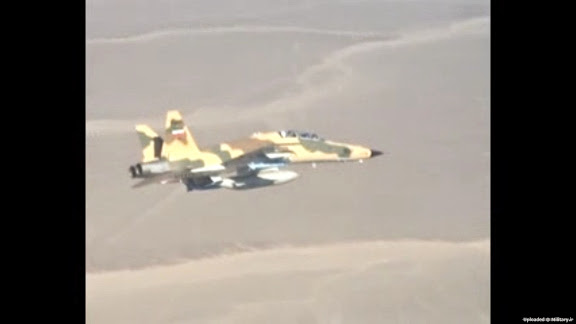 Video still of IRIAF HESA F-5F Saeghe II fitted with centerline drop tank and what appear to be AAM training rounds attached to the inner under-wing pylon stations (and not the wing-tip AAM launch rails).

COMMENTARY: According to aviation writer Babak Taghvaee, this Saeghe II was built from a 21OCT00 accident-damaged F-5F from Dezful/Shahid Vahdati TAB-4. Subsequently, the airframe was at times relegated to parts reclamation as well as restoration, before the fuselage was finally shipped to Iran Aircraft Manufacturing Industrial Company (HESA) to be used as the basis for the Saeghe II. Taghvaee goes on to state that Project Saeghe 80 and 90 remain active, with current Saeghe aircraft envisioned for upgrade to SR.II level, and the entire fleet of IRIAF F-5 aircraft converted to Saeghe types by 2030. If accurate, Iran's military leadership would be basing its plans for a maintaining of the status quo, where the IRIAF continues to be denied access to new deliveries of foreign import combat aircrtaft.

the Saegeh got Russian Engine, it is not F5

This aircraft is a modified, upgraded F-5F. Iran is planning to convert all its F-5 aircraft into Saegheh II. The decision is probably based on their analysis that the embargo on the sale of modern fighter jets to Iran will continue. Based on that analysis, modifying and upgrading the existing F-5 inventory makes sense.

Why do they always call their upgraded F-5s "home-made fighter jets"? It gets on a man's nerves!

The "Saegeh" does not have a Russian engine.It is a slightly modified and freshly painted F-5F.It still remains to be seen what type of avionics this modified F-5F holds. But knowing these lot don't be surprised if it still uses the same old systems.However,I do like the F5 fighter jet and especially the now defunct Northrop F20 Tigershark project. I don't know why these people didn't copy the F20 Tigershark fighter plane with its slightly larger single engine airframe.They could have used Phantom or single shaft Mirriage F1 turbojet engines.This is what the Israeli's did with their Kaffir project.The airforce has plenty of those engines lying around the place.

I am so proud of all our techs and engineers at all levels. Go Iran

Where do you get the russian engine? If anything it might be an overhauled J-85, but then again it would be hard to know if it is indigenous, as Iran might not publicize the construction of a foreign engine (especially one that isn't that great btw) for international copyright reasons... of course that would hardly change much to the actual international isolation the country is in..

A new engine would bring modifications to the airplane's dimensions. Something that is lacking here.
If conversion of the whole fleet is the objective, then I guess the low level of actual augmentations makes some sense (price-wise). This plane doesn't even attain the level of Brazilian F-5EM even though those were incredibly cheap by international standards..

Until these stinky mullas ruling the land of Ahura Mazda, Iran would not develop. It is better not to get excited and hope.

There is a good description of changes in http://www.flightglobal.com/blogs/graham-warwick/2007/09/irans-f5based-fighter-signs-of/

I see that folks from this "blog" are thirsty for a 'white' intelligence information.

The most valuable things from the events to 'upgrade' or develop some aircrafts is, that they create specialists and cadres that in a short period of time will be able to implement licenses for new products or implement them into their previous ideas.

Scientists and specialists are the most important steps in the development strategies, a rest like said A. Einstein are 'details'.

Nothing but spin and more spin! They paint a bananna green and call it a cucumber.They are really boring me with their games.

Actually you have it reversed. The level of technical expertise is more aptly described as improvisation; the more interesting bits being in the details.

I think everybodies general understanding is that some progress is better than no progress. One must consider that not every country has the resources for this kind of work. Good for Iran.

A greatnest in an overwhelming number of cases is 'born' by learning on mistakes and with using information from previous researches....

I have met people who said it doesn't pay to improve our designs because we can buy something better and cheaper from others, and we may ask them to provide some offsets for their business with us.
Ussually those offsets ends with limited time production of some mediocre components and/or"bolts".
See an experience and expectations of Turkey after their contract for the purchase of F-16's.

When I lived on the 'opposite' side, one propagandist explained to me that the technological superiority of the West and its wealth, was acquired by a teft and exploitation of other nations, as well as a luck that rarely if not at all any wars on their teritories destroyed infrastructures and the most important - scientists and highly skilled specialists.

I bet you, that if not the unjust sanctions, Iran would already experience a manned space mission.
And all these present accusations are meant to keep Iran at or below mediocrity levels, in order to show that its system is inferior to others.

I also see it as good for Iran and to me the plane that Iran has represents important steps in the development strategies towards a modern fighter of today. BUT it is several generations of steps behind, but towards accomplishing, that what the US has today in the F-35.

Step 1 in the program is to have the F-5 and which was initially designed in the late 1950s by Northrop Corporation. Being smaller and simpler than contemporaries such as the F-4 Phantom II, the F-5 cost less to both procure and operate, making it a popular export aircraft. It was perhaps the most effective US air-to-air fighter in the 1960s and early 1970s. Though primarily designed for the day air superiority role, the aircraft is also a capable ground-attack platform. After winning the International Fighter Aircraft competition in 1970, a program aimed at providing effective low-cost fighters to US allies, Northrop introduced the second-generation F-5E Tiger II in 1972.

Step 2 continuing on the F-5 then became the YF-17 (nicknamed "Cobra") was a prototype lightweight fighter aircraft designed for the US Air Force's Lightweight Fighter (LWF) technology evaluation program. The LWF was initiated because many in the fighter community believed that aircraft like the F-15 Eagle were too large and expensive for many combat roles. The YF-17 was selected for the new Naval Fighter Attack Experimental (VFAX) program. In enlarged form, the F/A-18 Hornet was adopted by the US Navy and Marine Corps to replace the A-7 Corsair II and F-4 Phantom II, complementing the more expensive F-14 Tomcat. This design, conceived as a small and lightweight fighter, was scaled up to the F/A-18E/F Super Hornet, which is similar in size to the original F-15.
See details at this address noting the similarity in the YF-17 TWIN TAIL and what Iran has today:-
http://en.wikipedia.org/wiki/Northrop_YF-17

Step 5 continuing on next came the F-35 and was designed to replace the US F-16, A-10, F/A-18 (excluding newer E/F "Super Hornet" variants) and AV-8B tactical fighter and attack aircraft. To keep development, production, and operating costs down, a common design was planned in 3 variants that share 80% of their parts.

The design goals call for the F-35 to be the premier strike aircraft through 2040 and to be second only to the F-22 Raptor in air superiority and the F-35 indeed drew elements from it.
Lockheed Martin has said that the F-35 has the advantage over the F-22 in basing flexibility and "advanced sensors and information fusion", and that the F-35 could replace the USAF's F-15C/D fighters in the air superiority role and the F-15E Strike Eagle in the ground attack role, see details at this address:-
http://en.wikipedia.org/wiki/Lockheed_Martin_F-35_Lightning_II

So I see that the plane that Iran has represents important steps in the development strategies towards a modern fighter of today. BUT it is several generations of steps behind, but towards accomplishing, that what the US has today in the F-35. What Iran has is a very good fighter for air-to-air attack plus air-to-ground attack use, but it is over 3 decades behind what modern jet fighters are today.

The future is already here today with F-22 Raptors appearing in Syria and soon also F-35 this also with very close Allies who do already have the F-35, see some details at this address:-
http://www.dailytech.com/US+Air+Force+F35+Lightning+II+F22+Raptor+Team+Up+for+Integration+Training/article36910.htm

it's the other way around... the square intakes came first and they eventually went back to the original design (by the third I brlieve). Just look at the intakes on this new model.

The future developments of the Iranian aviation and space program will be based on a joint and extensive cooperation with Russia, and Russia will be willing to transfer licensed production or even commence a joint development in those spheres.