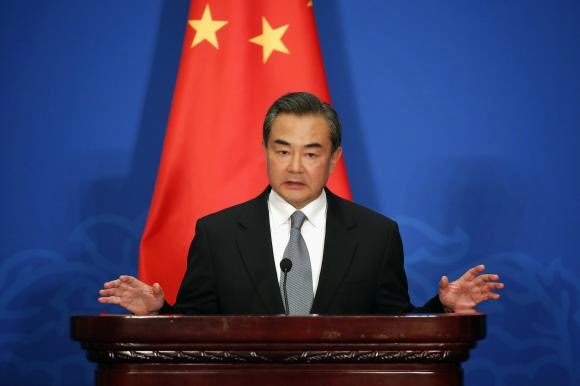 Chinese Foreign Minister Wang Yi said today during a visit to Tehran that a nuclear deal would help Iran escape from sanctions and allow more efforts to be spent on economic development.

“Talks on the Iran nuclear issue face a historic opportunity, and striking a comprehensive deal on schedule is the trend of the times and the desire of the people,” Wang said in a meeting with Iranian Foreign Minister Javad Zarif, according to a Chinese Foreign Ministry statement issued on Monday local time. (Reuters, 16 February)

“Reaching comprehensive agreement is beneficial to Iran upholding its own legal rights, including the right to the peaceful use of nuclear power, and for the people of Iran to throw off the difficulties of sanctions as early as possible and focus on energetically developing the economy,” Wang added.

Lets the China throws the sanctions out first, and then makes lecturing.......and the pep talk (Dobro, horosho govorit)preaching......

Who's lecturing. Everyone should want a deal. Prosperity brings stability. Capital. Development. Infrastructure. Markets. Influence. Soft power. More influence. More friends. More allies. Less enemies. More defense. More stability........ And with two great countries like China and Iran taking their place in the world, maybe, just maybe, we may begin to see more justice and less hypocrisy in the world. Lets hope the supreme leader has as much guts as most of his countrymen!