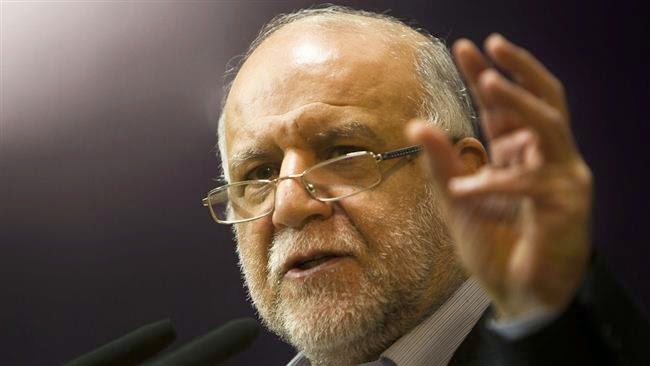 Zanghaneh said the falling oil prices have drained his ministry’s revenues to an extent that “no cash is currently available for the oil industry’s crucial investments.”

“The Oil Ministry has come across problems in paying the salaries of its own staff, let alone making (crucial) investments in shared fields,” Zanghaneh added. (Press TV, 16 February)

“The current situation of the oil industry is catastrophic,” Zanghaneh said. “If the clause (allocation of $4.8 billion from national sovereign fund to oil ministry) is not approved, we will fall into a real crisis.”

The proposal for allocating $4.8 billion from National Development Fund to Oil Ministry, however, failed to get enough votes in the Majlis and did not pass. It was forwarded to a Majlis committee for further discussions, Press TV reported.

Yes this is a fascinating example of resistance economy whereby the ministry that is responsible for 80% of Iranian revenues has to go back and beg for money from the depleted coffer! It is really tragic these state of affairs.

“We have a loose tooth called dependence on oil. Whoever can help us take out this tooth will do us a favour.”

There isn't just one "loose tooth" but a whole set of teeth that is dependent on oil. Shamkhani typifies the archetype IRI official that likes to live in total fantastical denial. While at the same time Iranian people are suffering because of officialdom and their nonexistent "resistance economy" nonesense.

considering that it's the soundest tooth in the lying mouth of the Iranian regime, removing it might not be such a great favor

Iran does need to lessen its reliance on oil revenues. But this discussion always comes up during periods of oil crisis, like prices going down or oil sanctions cut the exports. But as soon as prices start going up, or if sanctions are lifted, all the talks about reliance on oil disappear, and the ministry races to sell as much oil as possible. It has happened before in the Islamic Republic, as well as during the Shah's regime. Iranians should hope that this time the bad tooth could be taken out!

Yes Uskowi,during Shah's regime there were sound economic plans with strong Iranian currency and banking sector to back it. By its own right the Iranian car industry alone at the time was developing into an economic force.The list can go on and on. Since the inception of the IRI and its non committal attitude and destructive policies towards Iran's economy is it a wonder that the state of the country has become so shambolic? So under the present conditions taking out that loose tooth will be the final nail in the coffin of the Iranian economy.

Please stay with the discussion on hand: dependence of the Iranian economy on oil, in the Islamic Republic and during the Shah's time. That cannot be a good thing for the country, can it?

the revenues from oil are not now and never have been a bad thing for a country that hasn't had, in late centuries, much to offer the world in terms of exports outside of nuts and rugs.

it's not a rotten tooth as much as that Iran has failed to develop other teeth. even at this late date iran manufactures nothing other than third-rate copies of second-rate products developed elsewhere.

I found these discussions on Iranian TV interesting

Uskowi,what do you suggest that Iran should sell besides oil? We haven't any proper industry left to speak of. Over 80 percent of our banking sector is virtually bankrupt.Corruption within the whole system of IRI has been taken to new heights in our countries history.There is zero confidence from foreign investment into the countries economy.The incompetent management is unqualified or semi skilled and worst of all corrupt and unanswerable to potentail investors and workers alike. You know the country is drowning in quicksand when you have this top official claiming that they are unable to pay their oil industry workers.The very same oil industry that is supposed to be the main spine of the Iranian economy.

Uskowi,I posted a reply to your question and you have not allowed it through. But in case it wasn't your fault I will sum it up again. Iran will be dependent on oil for a long time to come.The countries banking sector is almost bankrupt. No foreign company will invest in Iran due to the nature and incredible corruption that exists at this present moment. Management is incompetent at best and couldn't care less for investors and workers alike. The system in Iran doesn't allow individuals and companies alike to prosper without IRGC meddling fingers in the pie. For a official of the regime to claim that they can't pay their workers just shows that Iran is drowning in quicksand of incompetence.Don't forget the oil industry is supposed to be the main backbone of Iranian industry. So with no proper industry and banking sector as well as management to speak of,how can oil be replaced in such a disasterous situation? Can you please answer this simple question?

Iranian economy is not in a good shape, and it's not just because of the sanctions. There are serious issues from mismanagement to corruption and above all structural problems. The government has not been able to initiate any serious and long-lasting economic reforms needed to address these issues. And this is not a young and inexperienced government; they have been in power for 36 years, as compared to Shah's 37 years. So considering these issues, my answer is that structural reforms are prerequisite for creation of a vibrant economy, including reducing the country's dependency on oil. But frankly, I do not see the political will on part of the government to undertake such reforms.