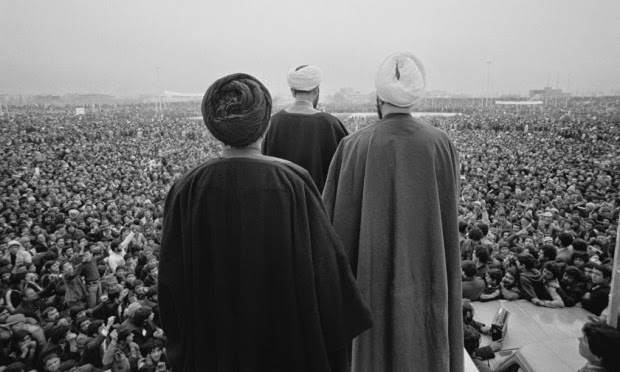 “Far from showing evidence of a well-oiled conspiracy, the document reveal an astonishing lack of awareness on the part of U.S. officials trying to manage events thousands of miles away that they failed to understand from the start.” – The Guardian

To read The Guardian report of the declassified document on Huyser’s mission, please click here.

Disappointed there are no links to the actual document by the Guardian or Yahoo News, as Guardian has a record of unreliability in its Iran reporting.

The account of the events of those fateful January 1979 days does not come as a surprise. The U.S. policy, or lack of, was a mystery to us in those days, now we know how poorly it was planned.

Trust me the US government at that time wasn't as naive as they claimed to be.They are not as innocent as they portray themselves either. Huyser went there to smooth the road for the arrival of "a Gandhi like
figure."
No matter what the "released documents" claim.The facts on the ground point a finger at US involvement in the rapid removal of the shah like a "dead rat" as one of defendants of the first kangaroo courts under the newly formed Islamic state claimed. We know this the Iranian people know this and definitely Uskowi know this.

Shah's military was a type of hierarchical organization that needed its commander-in-chief in place, and not deciding to leave the army and his country in the midst of the biggest crisis in modern Iranian history. Military chiefs were warning against shah's departure, but he made that choice and left them behind.

The army could probably have taken power after shah's departure, but that's the subject of these declassified documents: a White House that did not grasp the magnitude of the problem, with defense secretary arguing for Iranian military to take power, and secretary of state arguing against it. In the end, the events were too powerful and too rapid for them to make an adjustment, and the Iranian military without the shah could not make that decision on its own in those fateful January days.

A few years back , I read General "Dutch" Huyser's memoir on his mission to Teheran just before the revolution .. My take on the book and his mission was that his trip to Iran wasn't to formulate any last minute effort to save the Peacock Throne .,but more of a fact finding mission just to see what is taking place there .Indeed even shah himself may have been kept in the dark , since his internal intelligence apparatus was thought to be badly infilterated by the ( now disbanded )Tudeh Party elements .The bad guys scored a victory in 1979 in Iran that they really didn't deserve , and regional affairs paid royally for that misfortune .Let's hope that the Iranians can find their way back to a more normal country and decent political system .

Yes I agree with your assessment.But as you are well aware the Shah was put under pressure by Jimmy Carters adminstration to rapidly leave the country so that "things can calm down".The US knew that the military in Iran was under a type of hierarchical organization with socalled loyalists like General Gharehbaghi and General Faroust.These traitors worked hand in glove with US and British intelligence organizations.Prime Minister Bakhtiar and Iranian people were betrayed by these coat hanger generals to foreign interference.At the same time our socalled "intellectuals" and secular party activists refused to cooperate with our great Prime Minister Bakhtiar because of his insistance that the monarchical system should remain but be reformed in similar lines to Britain or Japan.I know it is history now,but when you look at in hindsight things should have been done in a much more calmer manner without all that blind hatred influenced by hot headed religious zealots and haters alike.This story by no means has ended yet until the day comes when Iranian people are free and the truth will be revealed in what happened in those fateful days and what terrible revelations will be unearthed about the present theocratical system in power. I assure you that day will come.

In fact the Iran Imperial army did intervene to quell the uprising , but its clumsy and heavy-handed approach only made the matter much worse than it needed to be . To be fair , no where in the Iranian Imperial army military doctrine was any provisions or training for suppressing the street demonstrations : any ill-trained and ill-indoctrinated army will fail the mission for which it hasn't prepared for .
Martial law was declared in all major Iranian cities in summer of 1978 , and General Azhari's cabinet formed a couple months later , was staffed entirely by high ranking military brass loyal to shah . But low morale and months of street clashes was taking a high toll on Iranian army in form of mass desertions and frequent insubordination and pushing it to the point of not being able to function as a coherent military with a sound command and control .It was thought that the Imperial and Immortarl Guard units could maintain some measure of normalcy in Teheran , but provincial cities and countryside were increasingly ungovernable .At the end , The Iranian Imperial army who had fought and won a remarkable counter-insurgency war in Zofar,, Oman in mid-seventies , proved to be ineffective for a mission that it hadn't trained for .