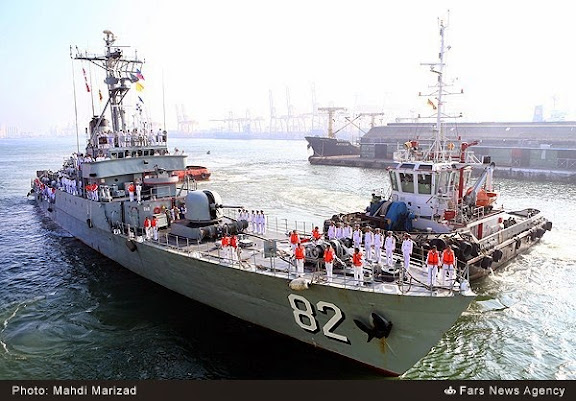 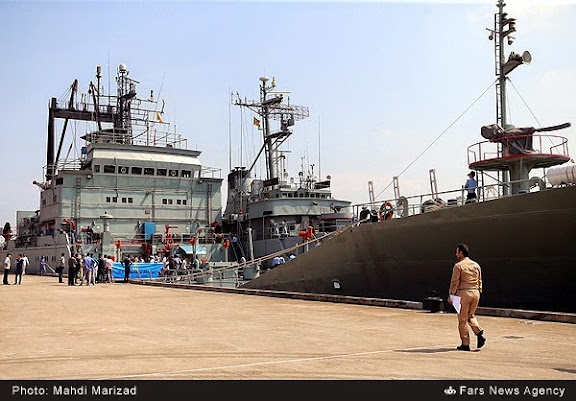 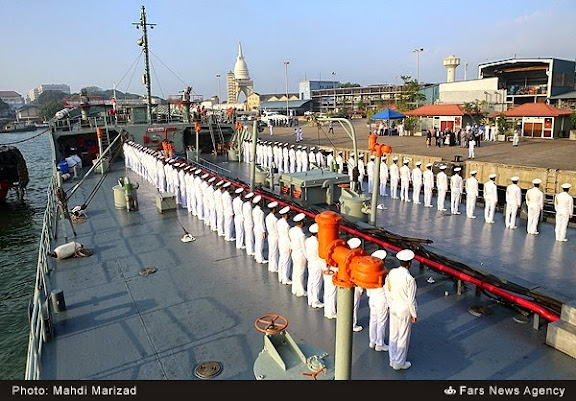 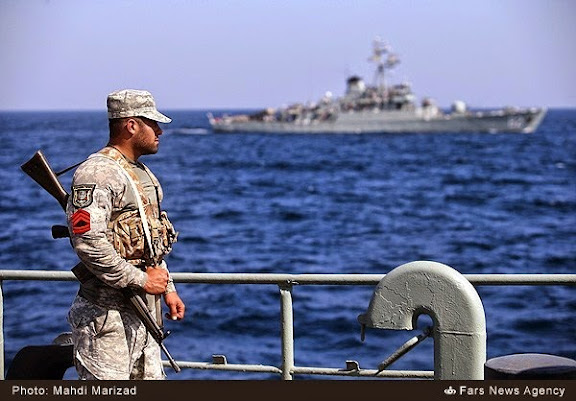 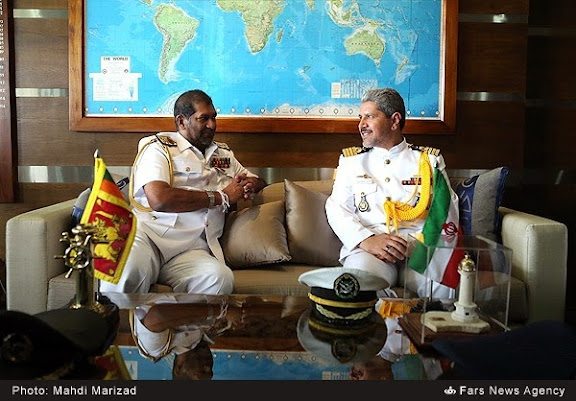 Interesting that there are no subs deployed with these group, here to Colombo.

Great to see Iran's Navy on their way to Sri Lanka is helping the other 30 nations in the International Task Force against Somali pirates, not only around the Strait of Hormuz next to Iran but also down through the Gulf of Oman and across the Arabian Sea. :)

For a growing number of ships’ crew, the Port of Salalah in Oman is a welcome sight after an unpleasant and often prolonged encounter with pirates. The Port of Salalah is a key container transhipment hub on the Arabian Sea and is often used as the first port of call for vessels whose crew have just been released from the clutches of Somali pirates following ransom payments for withheld vessels and crew. The port also plays host as a supply base for the visiting warships from 30 nations that provide protective escorts for merchant shipping in the sea lanes. From that dual role has emerged another, one as an intelligence network — both military and civilian — to exchange information on possible pirate sightings and near misses. Also, the International Task Force often uses the port as a base and with their main command and control plus resupply base in Bahrain. There is a significant number of warships of all the 30 nations coming in and out of the port, which makes it a very safe bubble. Yes its great to see that Iran's Navy is helping.

Iran does indeed maintain cordial relations with all but a small clique of states in its neighborhood. This port sounds like something out of 'Game of Thrones'. I got visions of sheesha bars full of all sorts of spies and spooks and possibly a pirate getting a little R&R. Hopefully in the years ahead the US will realize its navy doesn't need to guard every strategic piece of the globe. I really hope a deal can be done re the nuclear issue. A comprehensive deal. I say this despite believing any deal of any sort stands a snow flakes chance in hell of being ratified in any US congress. However even if Iran must, for many, feel humiliated, an agreement must be reached. For one reason. For Russia, Europe, China, South America and Africa it would loosen up the definition of what is a breach of an agreement, what is a failure to fulfill obligations, who is a terrorist, and whether business should flourish. Through prosperity comes soft power. Without an equal regional treaty Iran's ballistic missile program should be left out of the nuclear talks. As should Iran's and the regions chemical weapons As should Iran's support for Syria, Hezbollah and Hamas. Iran should accede to a deal where all their 20% enriched uranium leaves the country if they must. But Iran must insist its rights under the NPT are respected. That being a threshold state. Meaning, should Iran feel an attack imminent it has the infrastructure in place to build a nuclear deterrent within twelve months. From the mining of the uranium, enrichment, and right through to weapon delivery systems. Of course this would leave Iran vulnerable given the number of America's Nuclear armed allies she has as neighbors. However probably no more vulnerable than she is now. So the Mullahs truly would be mad if they handed over all their 20%, and decommissioned a critical number of centrifuges....... Before seeing substantial deliveries of modern CONVENTIONAL weapons. Firstly, the honoring of previous contracts in the shape of s-300's. Followed by a truly 4th-4.5 generation air force. Ballistic missile defense. And a seat at the G-20. If it still exists.

I wish Austalia and the amazon Nations and African nations and many other regions of the world would grow more HEMP! I wish they could employ lots of people operating the machines, transporting the never ending processed product the plant gets its fame from. I hope millions of tonnes could reach countries such as Iran and Egypt, and in their factories they could assemble the multitude of products this resource could create. Textiles, skin care products, foods,medicines, crumpling, repairable automobile panels that SAAB will put in their Volvo's. Because they're are renewable. reliable and safe. Egypt and Iran come to mind because both seem to have a crises of culture. Simultaneously revolutionary yet ruled by those who fear a middle class that makes up 40-60% of its population. Instead of a malleable 10-20%. Iran amazes me with its car industry, whereby Egypt amazes me that it has none!

Hey Mr Uskowi! You never did explain why it was interesting no Iranian subs were accompanying the 33rd fleet? I am sincerely interested. The Kilo's and others in the inventory are unavailable? The Iranian military is reluctant to see these assets too far from home at this time.......?

I don't have the answer to that. It made sense to have a sub accompany the group; Kilos were capable doing that.

No argument on that. Merely wondering why. Kilo are very reliable. Could there be political or Military reason. A sub is always an effective flag bearer on such trips!

for all u know there is a sub parked somewhere beneath the waves!!!