For His Film ‘Taxi’ 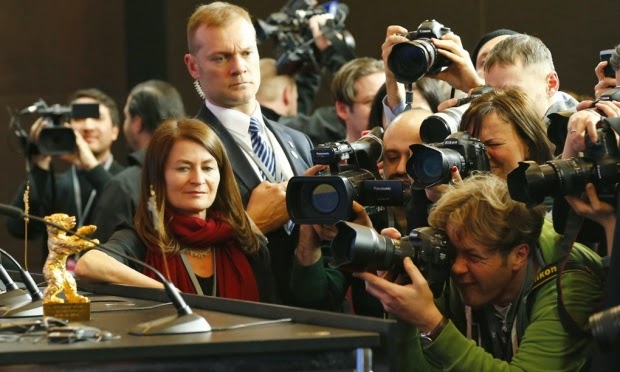 Iranian director Jafar Panahi won the highest honor at the Berlin Film festival tonight, winning the Golden Bear for his film “Taxi.” Panahi is banned by the Iranian authorities from traveling abroad and could not be in berlin to accept the prestigious award.

Panahi, often described as “Iranian Woody Allen,” stars in his own film as a taxi driver talking to his passengers as he drives them through the streets of Tehran. The film is also banned in Iran.

“Instead of allowing his spirit to be crushed and giving up, instead of allowing himself to be filled with anger and frustration, Jafar Panahi created a love letter to cinema,” said Darren Aronofsky, the American director and Berlinale jury president. “His film is filled with love for his art, his community, his country and his audience.” (AP, 14 February)

Photo credit: Photographers crowd around the Golden Bear awarded to Jafar Panahi for his film ‘Taxi.’ Panahi is banned from leaving Iran and could not accept the award in person; berlin, 14 February 2015 (Axel Schmidt/AP)

See what i mean when i question Iran's proclivity for being so goddamn special. Jafar Panahi who is among one of Iran's most creative and talented film makers, is standing on top of the podium in the form of a miniature statue, he is literally that golden bear. It's comical and tragical all at the same time. The akhoonds have successfully shamed Iran and made a laughing stock out of our country. The world don't know whether to laugh or feel sorry for Iran and its people.