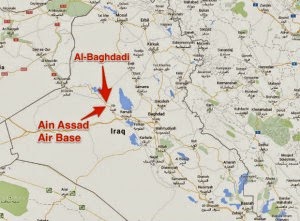 Islamic State insurgents took control on Thursday of most of the western Iraqi city of al-Baghdadi, about 85 km (50 miles) northwest of Ramadi in Anbar province, Reuters reported. The town had been besieged for months by ISIL.

“Ninety percent of al-Baghdadi district has fallen under the control of the insurgents,” district manager Naji Arak said. (Reuters, 12 February)

The insurgents are now only five kilometers from Ain al-Asad airbase, where U.S. marines are training members of the Iraqi Army 7th Division. Pentagon spokeswoman Elissa Smith confirmed the fighting at al-Baghdadi, but said the airbase did not come under direct fire. She added there were reports of ineffective indirect fire in the vicinity of the base.