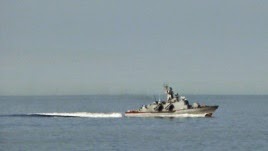 Iranian media reported today that in December the Turkmen naval vessels opened fire on an Iranian fishing boat, killing one of the fishermen, sinking the boat and took the surviving fishermen into custody. IRNA said as yet “there is no exact information and the fate of the crew.” (IRNA/Radio Free Europe, 1 February)

IRNA, the official Iranian news agency, today called the attack and detention of Iranian citizens a move “contrary to international law.” IRNA did not explain why it released the news of the incident after nearly two months, which was coordinated with other Iranian media that released the story today. There were also no information whether the body of the fisherman killed in the attach has been returned to Iran.

Basically, the IRNA avoids to rush and publicize rumors or false propagandas like those western ones, where they allege that Iran faked the launching of the monkey into the space, or that it made fake copies of the RQ-170 for propaganda, as well as that Ayatollah Rouhani (is) maybe against the Islamimic system and so on......,

The other issues of that matter is, to sow divisions and isolations between the Islamic Republic and its neighbours.....and the IRNA needed time to analyze those information.

Here's a speculation... fishermen probably trespassed into Turkmen territorial waters and perhaps even ignored Turkmen advice to go back. If that proves to be the case then what happened wasn't strange.

What are you talking about? News agencies need to sit on the news for nearly two months to analyze it before reporting? Are you OK? How about the other media outlets that also reported the story today, were they also analyzing the issues for two months before reporting it?

they don't check a dam thing other than checking to see if they have permission.