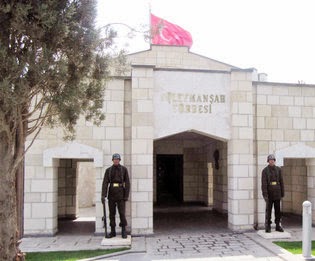 600 Turkish troops and about 100 tanks and armored vehicles supported by jets overhead entered Syria to evacuate soldiers guarding the Tomb of Suleyman Shah, the grandfather of the founder of the Ottoman Empire, and move the tomb’s remains. The tomb, considered Turkish territory, has been besieged by Islamic State insurgents. The military operation started on Saturday and continued through Sunday. (Twitter & New York Times, 22 February)

The Turkish task force entered Syria through Kobane, the Kurdish town that was liberated recently after Kurdish forces launched an epic fight against ISIL who had occupied most of the town. On Sunday morning local time, the Saygi Station, which houses the tomb, was under control of Turkish armed forces. Prime Minister Davutoglu posted to Twitter this morning that all the tomb’s valuables, including historical remains, were delivered back to Turkey.