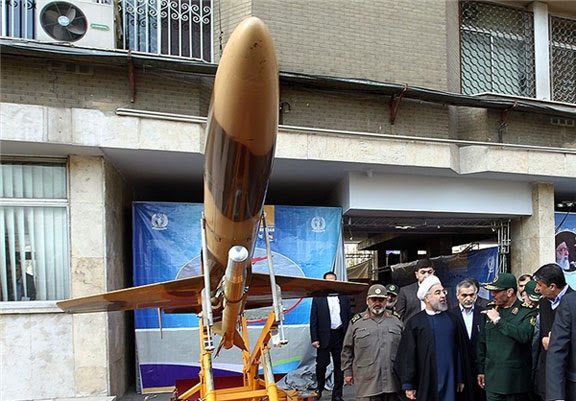 
Iran displayed its advanced home-made combat drone, Karrar, in camouflage color and armed with anti-aircraft missiles in an Exhibition in Tehran on Saturday.

Karrar is capable of carrying a military payload of 500 kilograms to carry out bombing missions against ground targets. It is also capable of flying long distances at very high speed.

There seems to be something of a defense-related media blitz taking place from Iran following the recent U.S. inclusion of military subjects (ballistic missiles) into the ongoing nuclear talks. Possibly related to that response or offering another explanation: this may be an attempt by Iran's executive branch to demonstrate toughness on matters of defense, in an effort to subdue hawkish detractors of its outreach attempts toward the West.
Posted by Mark Pyruz at 12:13 AM