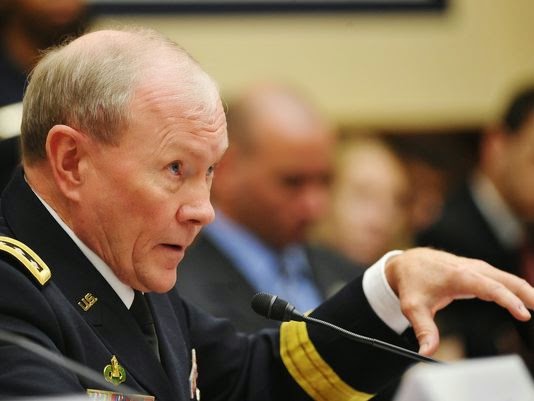 Chairman of the Joint Chiefs of Staff Gen. Martin Dempsey told reporters today aboard a government aircraft leaving Israel, after wrapping up a two-day visit to the country, that U.S. and Israel are now in broad agreement about the “Iran threat.” (USA Today, 1 April)

In the past, Israelis have expressed wariness with U.S. policy toward Iran and there were disagreements on the pace at which Iran could field a nuclear weapon.

“Our clocks are more harmonized than they were two years ago,” Dempsey said. “They just wanted to know that we are maintaining and continuing to refine our military options,” he said. (USA Today, 1 April)

Those news in the author's article are the reasons, among others, why the Supreme Leader and Ayatollah Janati don't see "moderates' " efforts feasible,.........and instead They emphasize on resistance strategies.

And it would be interesting to hear discussion, by commentators, about chances of the resistance economy and its possible stages as well as details, than to blurr a time and dwell on zionist's speculations.

Are you going to live under the "resistance" regime, or comfortably in the west? I thought so.

The usual empty threats from the us and israel,you`d think if the us was serious about any negotiations they`d tell the israelis to shut the f##k up and remove any references to "military options",with negotiation "partners" like that its not looking too good for the moderates

I think everyone hast to prove from time to time that they are worth the money they are paid .
This goes from a General in any army to any politician who is sponsored by groups and parties.

US can cause damage to Iran but rest assured, it will bleed hard ! Unlike it is used to !

But we all know it will never happen... Self preservation is the reason on the sides of US Govt. And the anti Iranian Israeli regime.

Iran and its Govt. Already has its deterrent (everyone knows) and the rest is saber-rattlling to preoccupy idiots.

I think that the window of an "opportunity" for the Zionists has been closed with new geopolitical situation, after changes in Ukraine......

They (Zionists) may attempt some pinpricks against the IRI, but it will work only as an immunization shot for the Islamic Republic.

I am not compensated as most of you....and I make make my judgments and conclusions in the interest of better World and the policies of the IRI are closer to that ideal than policies of the Zionists and their puppets.

Tell me "Daruish",why is the policies of the un-Iranian Islamic terror regime causing suffering in Lebanon,Iraq and Syria with over a million displaced and killed? The terrorist theocracy is busy giving away our wealth and well being to any crackpot dictatorship that opposes the so-called "Zionists" Don't you ever forget that it only takes a few "pinpricks" to knock a herd of elephants down.

Iran needs allies and they need Iran to resist and survive together.

Syria was primary place for world tourism and enjoyed tranquality of social harmony, until the West and its Arab puppets, financed unrest and violence as well as incubated more terrorists in that and other countries.