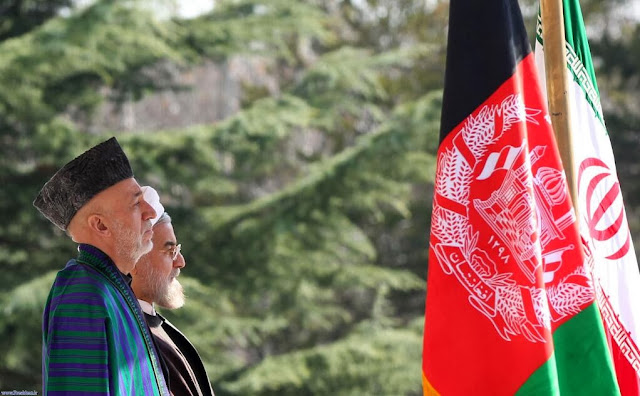 Afghan President Hamid Karzai arrived in Tehran today for a series of meetings with senior Iranian officials. The Iranians are pushing Karzai to continue his refusal to sign the bilateral security pact with the U.S.

A Karzai-appointed Loya Jirga last month approved the Bilateral Security Agreement (BSA) to allow and regulate the presence of some U.S. troops in Afghanistan after the drawdown of U.S. and NATO forces at the end of 2014, but Karzai’s decision not to sign the accord could force the U.S. to exercise the so-called “Zero Option,” a total withdrawal from the country in one year. The Taliban also favor the Zero Option.

another begger nation that we have to support despite very high level of unimployment in Iran itself. Afghanistan and Pakistan have never been a country and will never be one. They are run on the basis of momadic tribes with no central government and control. At least the presense of US troups gives a degree of stability to that lawless land. what afgan and pakistan have contrributed to Iran except flooding the country with heroin and drugs plus terrorists using these two countries to attack Iran!

Just as Maliki and Iraq leveraged Iran in their dealing with the U.S. military occupation and SOFA, so does Karzai and Afghanistan.

Imagine had the Bush Administration not backstabbed the Khatami administration's support for OEF, pocketing Iranian support and turning around to brand it an "Axis of Evil." These leverage games would not have been feesible, and possibly not even relevant.

the beatn American leave
the Iran come in.

10 Years war against some Afghan Ak47 fighter was useless