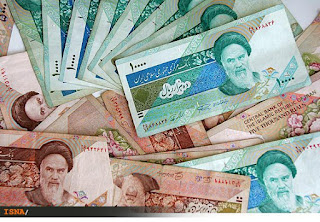 Iranian Minister of Economy and Treasury Shamsoldin Hosseini told reporters in Tehran today that recent reduction of sanctions-related anxieties in the markets has helped the country’s national currency to regain some of its value. Hosseini also said the Central Bank of Iran (CBI) has increased the injection of hard currency to the markets in recent days to shore up rial’s value.

“Of course the reduction of some of the anxieties caused by the sanctions has resulted in strengthening the exchange rate,” Hosseini said. “And in recent days, CBI has also been able to inject much more hard currency in the exchange market which has been the main reason for the improving exchange rates.” (Fars News Agency, 5 March)

The rial has gained more than 15 percent in value against the dollar this week in the aftermath of the Almaty Talks, now being traded at open markets at around 32,000 rials to a dollar.
Posted by Nader Uskowi at 8:40 AM

There is no reduction in sanctions. Except from a lying member of the regime,its foreign minister who claimed that the sanctions will be lifted.No mention of this except from one of the wishful thinkers of the theocracy.
For the sanctions to be lifted the regime must abandon its enrichment program above five percent,open up Parchin and even then the countries economy wont go back to normal due to the massive incompetence of the parasites that suppose to manage it.
The rail will go down in value very soon.

The regime has not adressed or solved one single problem that led to the crisis: the main reason being that nobody trust them; no amount of magic thinking will increase the value of Rial; their current strategy seems to be simply ignoring the reality of those problems; I can assure you this strategy will no work either ...

It is Pathetic to see how Anti-regime or pro-regime fanatics let their emotions take over logic, facts and the truth...The only reason Rial improved was due to infusion of Dollars into the banks and the monetary sources. Will this last or continue, depends on the action of banks and the policies modifications in the next few months.

Do you count the minister of economy as one of the pro-regime ‘fanatics?’ He offers a second reason aside from large injection of dollar in the market for the improving exchange rate: the reduction of sanctions-related tensions in the market. By that he was referring to the relative positive news coming out of Almaty last week. Don’t you believe he’s on the money!

The psychology of the news might have an effect on the exchange rate, but at the end of the day is the infusion of Dollars into Central bank that changes the fundamentals.

Agreed. But it’s also more than just psychological. Easing of tensions discussed by the minister comes with an expectation of ease in oil sanctions in future, which would directly affect the CBI’s dollar holdings and its ability to intervene in the currency market to shore up the value of rial.

Correct. And I think the last deposit of $ into the central bank was apparently due to some ease of financial regulations.

The FACT is that it shows the failure of sanctions and an understanding in the region that Iran's economy is self-sustaining. The crazy enemies of Iran have predicting doom and gloom for over 34 years now like a mental nutter in a looney asylum. Most are old and aging fools and live in delusion. A nation with 82 million people holding some of the world's largest oil and gas reserves simply can not be sanctioned. Even in the puppet petro-pimpdoms of the Persian Gulf Iranian currency is appreciating.