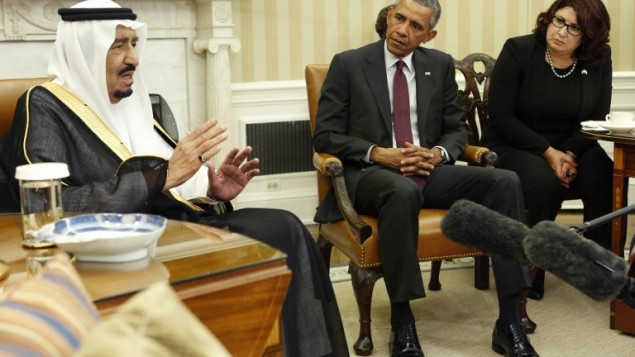 Saudi Arabia’s King Salman met with President Obama at the White House on Friday. The monarch on a visit to Washington said his country was willing to collaborate with the United States to ensure stability in the region. King Salman characterized his visit as symbolic of the deep ties between the allies.

President Obama said he and King Salman shared common goals of countering Iran’s destabilizing activities in the region and resolving the crisis in Yemen. Obama added he shared the king’s desire for an inclusive government in Yemen that can relieve that impoverished country’s human crisis. Their talks also addressed the Iran nuclear agreement.

Meanwhile, Secretary of State John Kerry said the United States was working with its Arab allies on a ballistic missile defense system, special operations training and large-scale military exercises. Kerry met King Salman ahead of his meeting with President Obama.

Why does America treat such a regime with respect while they have one of the worst human rights record in the world? Even back in the 1970s the US didn't utter a word regarding human rights in Saudi Arabia,why?

He is trying to show what he meant with his hand but he suddenly forgot what he was saying and everyone looking weird at him because he doesn't make sense. MS is a bad disease for a King!

Cause they are friends.