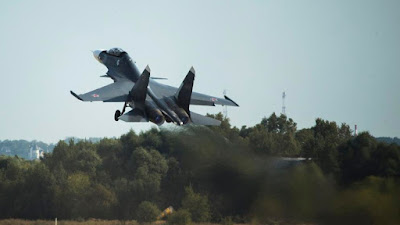 The United States disputed Moscow’s claims of hitting ISIL targets. Defense Secretary Ash Carter said the strikes were in areas where there were no ISIL forces.

ISW reported that according to local sources, Russian airstrikes were conducted in northern Homs and the provinces of Hama and Latakia. Local militia forces and hardliners operate in these areas, but the nearest positions held by ISIL are over 55 km (34 miles) from the areas targeted by the Russians. 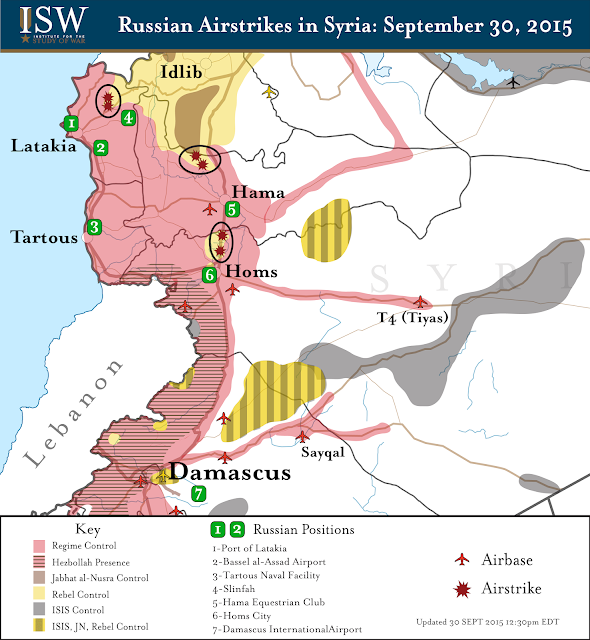 Russia has deployed 40 fighter-bombers and transport/combat helicopters as well as 2 transport aircraft.

Interesting! They are committing themselves to this conflict on Assad's behalf at a level not seen after the Soviet invasion of Afghanistan. Let's see if they succeed.

I wonder if this means Iran will cut itself a break and focus more on other countries like Iraq and Yemen. Just today Khamenei made a not-so-veiled threat against the Saudis, and the latter say they've seized a weapons ship from Iran to the Houthis.

This might be a mere coincidence, but the timing is worrying.

if SU-34 will be successful in Syria , then Itran will buy it

It's good if Russia with its very capable military hits ISIL. That would indeed be a very welcome development. But if they are striking the opposition to prop up Assad, I don't think they could make much of a difference in the 4.5-year civil war.

On Thursday, Russia changed the story that its airstrikes were targeting ISIL, as was reported on Wednesday by Russia's defense ministry and earlier mentioned by Putin as the rationale of Russian military involvement in Syria. Now they are saying they are targeting "a list of well-known militant organizations." Interestingly enough, in the first wave of their airstrikes they did not target ISIS at all, in fact the closest ISIL position to the areas hit by the Russian was some 34 miles away! Let's see if they hit ISIL in their future airstrikes.

Russian are in Lakatia, close to Lakatia is Idleb, which is in the hand of Al Nusra, Djaisch AL Islam,.. another groups.
the are a lot of Terrorist group in Syria, ISIs is ony one of them

Iranian defense has been reinforced; for a time of expiration of the nuclear agreement, by that Russian mighty deployment...

What Russia wants, is a permanent control of accesses in the Mediterranean Sea, and Syria is the only country for now, where this goal can be secured....

Russia's actions benefitt, not only Assad, but the greatest beneficiaries are the Islamic Republic and Hezbollah. They no longer has to worry like before.

Lavrov said it best,"if it looks like a terrorist,walks like a terrorist...."
Its good to finally see both iran and russia stop screwing around and finally make the effort that is needed to turn the tide of the war once and for all in the governments favor,this should have been done two years ago
http://edition.cnn.com/2015/10/01/middleeast/russia-syria/

I'm expecting to see the Russians put in at least some token effort against ISIL at some stage. The skies above rebel held Syria is thick with tokenism lately. France, Turkey and Russia all now joining the party. All with their preferred terrorist to bomb. When the Syrian war began 4.5 years ago, should someone had told me this scenario would be upon us I would have thought them mad. I guess the race is on. Forget moral high ground. Whoever kills the ISIL leader first looks totally cool for news cycle or two!

Dear Mr Uskowi
One reason Russia started its air campaign by attacking non-ISIL targets in the first wave , I think , is to create a solid geographical area in western area that is clear from any opposition forces . This area in western area could be used as an over-sized safe haven for Syrians who are fleeing the takfiri terror .
The Putin aim may be to create a viable geographical area for Syrian government that can be defended , and then take on the ISIL/Nusra .Looking at the above map , there seems to be a few pockets of rebel-held areas in the midst of Syrian government-controlled zone Moving those pockets could make reaching a peaceful solution much feasible when the time comes .

Are you saying the Russian plan for peace is to physically eliminating the Syrian opposition? Sounds more like genocide than peace plan and negotiated settlement of the conflict, no?

I'd personally say it is secret to none that a diverse range of jihadists are operating in Syria, namely Ahrar Al Sham, Jaish al Islam and the notorious Al-Qaeda affiliate Nusra Front perpetrating countless heinous crimes against humanity in every sector they take over, with little to no difference with IS in whatever way. Those are actors comprise 90% the recent Army of Conquest that has been seizing large parts of territory in Idlib and getting dangerously close to areas still spared from daily rapes, beheadings, executions, and destruction of valuable archaeological treasures. So why would we denounce Russia raids against these groups? A given jihadist indeed needs not self-declare under a given banner to become the legitimate target of the Russian/Western war against terror. As for Moscow’s overt support for the Assad government - from the onset of its escalation, the Kremlin has made it clear that it intends on reaching two objectives in this war:

1-Preventing the imminent collapse of an allied regime they consider as being the only viable secular rampart against pseudo-Islamist savagery. Like it or not, this is their official position. I would be the first to disagree, but my point is that there is no hypocrisy here.

2-In a rationale similar to Western countries, taking action against terrorists’ movements in the country to prevent its spread from going on or allowing them to ultimately link-up their efforts with volatile regions bordering Russia.

I see no glaring discrepancy between those stated goals and the targets chosen by the Defense Ministry so far.
And no valid reason to bow to the demands of a western-led coalition counting notorious Muslim Brotherhood supporters among its ranks like Turkey, secretly buying oil from IS and long suspected of giving implicit support to its forces when it comes to help them overrun Kurds in Kobane, perform a couple symbolic strikes on some of their positions after an isolated border clash, and then concentrate again their war effort against the PKK. Or Saudi Arabia, and its infamous support for Al-Qaeda/Nusra in general. Or Washington, planting its own CIA-funded anti-government troops and agents in the country along the way, exactly like what Iran does on the behalf of Assad, or elsewhere in Iraq and Lebanon: What kind of meddling is that?

They cannot lecture Russia on its targets when they bomb Syria themselves in quite a selective fashion, frustrating even some US pilots unable to take action on confirmed targets for obscure reasons every time. Let alone the fact that they, by contrast to Russia, operate illegally and uninvited by the Syrian government as a whole, no matter what you think of it politically. Here, Russia is compliant with the UN Charter where the US & allies are not, so it is not up to the latter to ask anything from it in its current undertaking. Go ask ordinary Syrians living in western Syria what they think today of those strikes.

Now obviously, Russia is indeed playing political games on top of its actual campaign and not implementing its words to the letter, altering it along the way, but this has been the norm of foreign interventions for the past couple of decades in the region, no matter whom. Yes, every actor currently intervening against jihadists also attempts to push forward its own geopolitical agenda in the process : Russia wants to prop up a now totally dependent, "satellized" regime while the Western/Gulf coalition wants to replace it with a Western/GCC-centric regime, democratic or not. Quite expected cold-war style calculations by all. Putin’s Russia makes no exception to that rule. But people should stop blaming it simply because it doesn't want to reduce the scope of its bombings to a single jihadist group "because the fight is against Daesh, and Daesh only" as French President François Hollande very unintelligently claimed yesterday. So we aren’t at war with any other criminal fundamentalist movement whatsoever, currently ravaging Syria then. Seriously ?

Not at all,preferably the groups involved will realise the hopelessness of their situation and the impossibility of overthrowing the syrian government and in the interests of preventing any further needless loss of life and property will hopefully surrender/sue for peace,or perhaps the government could offer a general amnesty to those who arent the ringleaders and who have not committed war crimes,so no "genocide" needed really,indeed most people wouldnt consider legitimate anti-terror/anti-insurgency operations to have anything whatsoever to do with actual genocide.In the end it really all comes down to whether the "insurgents" want to keep fighting or accept that there is now little hope of realising any of their aims.Now as for the foreign fighters/mercenaries like isis or al-nusra these will in all likelihood have to be completely destroyed as there can be no question of any deals with them,also what would you do with them if they did surrender?,the best thing for them is swift,and hopefully very painful,martyrdom

Reply 10:48
No , not at all . I think better to create a safe haven for the Druze, Christians , Alawites and moderate Sunnis in the western part of Syria . Then the moderate Syrian opposition ( whoever they might be ) could settle in the eastern part of Syria while liquidating the entire takfiris . The had long ago lost the chance for a somewhat decent outcome in Syria .All we can hope for now is the end to atrocities and human calamities .