If Sanctions Are Not Lifted Completely, Iran Will Only Suspend Its Nuclear Program - Khamenei 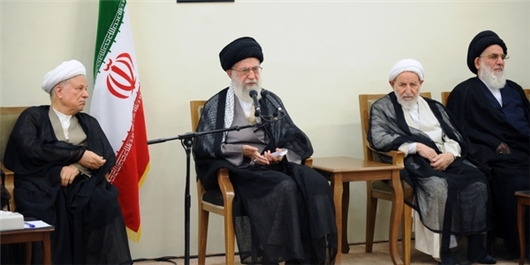 Iran’s Supreme Leader Ayatollah Ali Khamenei today backed a parliamentary vote on the nuclear deal, and demanded lifting of all sanctions before Iran dismantles any parts of its nuclear progarm.

“I believe, and I have said it to President (Rouhani), that it is not right to sideline the Majlis (Iranian parliament) on the (nuclear) deal,” Khamenei said. “I am not saying how the review should proceed or whether the lawmakers should approve the deal or reject it. It is up to them, as representatives of the people, to decide.” (IRNA, 3 September)

Khamenei made the remarks a day after President Obama gathered enough supporters in the United States Senate to veto an expected disapproval vote on the deal by Congress and sustain it.

In his speech today, Khamenei also said that as part of the deal sanctions should be lifted completely, and not just suspended.

“Sanctions imposed on Iran should be lifted and not only suspended… If not, then we will only suspend our nuclear activities,” Khamenei said. (IRIB/IRNA, 3 September)

The nuclear agreement, JCPOA, would suspend sanctions in phases as Iran complies with its commitments to dismantle/redesign different parts of its nuclear program, and will remove them completely upon full compliance by Iran of all its commitments. Khamenei’s call today for lifting of all sanctions completely before Iran makes concrete steps to dismantle/redesign parts of the program could probably bring about the collapse of the JCPOA.

Now the most likely course of action is for the Majlis to approve a revised version of the deal, incorporating Khamenei's conditions, which would probably not be acceptable to P5+1. Khamenei made his stance on the issue clear today, and the Majlis will be expected to follow him.

Iranian President Hassan Rouhani had earlier said that the Majlis review of the deal was not required or necessary and instead he had sent the agreement to the Supreme National Security Council (SNSC) for review, where an approval was expected.

According to Larijani, parliament could also elect not to take the matter up as a bill, with an affirmative vote making JCPOA law. This is the public position of figures such as Firouzabadi.

It would surprise me to see parliament pass legislation imposing changes to JCPOA. Like our U.S. executive branch made clear to undecided Democratic lawmakers, having P5+1 diplomats spell out in no uncertain terms this deal was it or they would walk away from US sanctions, the Iranian side has also got to know this is it or else.

I have to say, if they back away from JCPOA as is, they're screwed.

It means consistency of the Supreme Leader positions, and clarification for others......

1. Gen. Firouzabadi, as well as President Rouhani, opposed a Majlis review of JCPOA, as you had pointed it out before, but for two different reasons. Firouzabadi was concerned to have Majlis vote on the agreement, making the document including its defense-related clauses a binding legal document. And he was vey clear about his opposition. Rouhani opposed it fearing the Majlis might vote no.

2. In identical quotations published by IRNA and Fars, Khamenei was very clear: Majlis needs to vote on JCPOA. Although he said he would not tell the MPs how to vote, in favor of the agreement or rejecting it. And then he talked about his opposition to parts of the agreement dealing with sanctions relief. It is the latter which is of concern.

I do agree with you that it would be very unwise of Majlis to either reject or revise the agreement, which would in effect be a type of rejection knowing the stance of the P5+1 that either the agreement is approved in its entirety or none, no stomach for further negotiations! So the Majlis, and the SL, should look for a way approving the agreement but express their reservations without forcing a revision to the document. Let's hope cooler heads prevail in Tehran.

Maybe if Khameini threatens to use his mobile cranes outside "majles"? Wait a minute he doesn't have to threaten his stooges in "majles" because the pretend opposition does what they are told. The mobile cranes are only used for the real opposition against the theocracy.

The Supreme Leader's position on the nuclear deal, leaves a room for criticizing and even walking away from the deal; if the West will obstruct its obligation to permanently lift the sanctions, and points to possibilities what exactly happened to the 2003 and 2004 nuclear deals.....