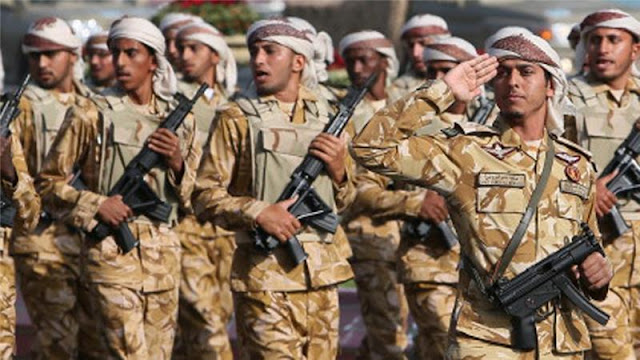 The Qatari forces are now heading to Yemen’s Mareb province to join the Saudi/UAE-led coalition to break the siege of Mareb city by Houthi and Saleh forces. This is the first time that Qatar is deploying troops in Yemen to support the anti-Houthi offensive.

Al Jazeera reports that more Qatari troops will be deployed in Yemen. The new force is expected to secure the Jawf governorate.

Meanwhile, UAE conducted bombardment of Houthi/Saleh military bases in Nahdain and Fajj Attan hills in Sanaa in the heaviest of the six-month-old air campaign on Sunday. Also targeted were Houthi positions in northern areas of Sufan and al-Nahda. UAE, Saudi Arabia and Bahrain lost 61 soldiers on Friday when their camp’s weapons depot was exploded after being hit by a missile fired by the Houthis.

It appears they're not interested in any political settlement after all. They say they will move to Saa'daa as well, which has always been a Houthis stronghold. I don't know where the Houthis are supposed to go after that lol, but I'm sure this hardline policy will make life hard for the Arab-coalition as an occupation force should they successfully take San'aa.

I sense lots of bloodshed will ensue. God help help the Yemeni people!

Until both sides realize that a military solution is not feasible in this conflict, there would not be any serious attempt to settle it politically. And both sides are saying, and probably believing, that they can win the war. Let's hope we'll have a negotiated settlement at some point before further destructions and humanitarian catastrophe.

Well, yeah, but they don't seem to be preparing for any political settlement. 10,000 PGCC troops, thousands of non-PGCC mercenaries and hundreds of tanks, armored vehicles, missile launchers and helicopters can only mean a full-scale invasion of San'aa and Sa'daa. This is how we know there will be an alarming amount of bloodshed, and it's not just Ansarullah that we have to blame this time.

And if they (the PGCC) fail this time, Ansarullah will have withstood everything the PGCC can throw at them and would probably raise the stakes by demanding more concessions in any future political settlement, which the PGCC won't accept, and so we'll go back to square one.

What's the U.S waiting for? Why doesn't it pressure its Arab allies?