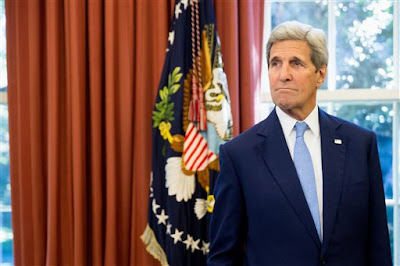 Secretary of State John Kerry said today the U.S. is weighing an offer from Russia to have military-to-military regular contacts and meetings on the situation in Syria. Russia is building up its military presence in the country to support Assad regime’s military operations against ISIL and the opposition groups.

Russian Foreign Minister Sergey Lavrov proposed the mil-to-mil arrangement in a phone call on Tuesday. Kerry said he favored the idea, which enables the U.S. to have a clear picture of what Russia’s intentions are in Syria following its recent military buildup there. (AP, 16 September)

Photo: Secretary of State John Kerry during a meeting at the White House; 15 September 2015 (Andrew Harnik/AP)
Posted by Nader Uskowi at 4:16 PM

I think we should support Russian effort to fight ISIL .However , the questionable nature and conduct of the Syrian regime will continue to present a road block to our cooperation with Russia in this regards .

Syria and Iraq need some kind of resolution the same way that did in 1989-90. This resolution needs to exclude armed terrorists including ISIL and an-Nusra front (Palestinians were excluded from Lebanon's politics) and needs to include every other group including Assad. Ironically in Lebanon it was the Syrian army which brought peace back to Lebanon and retained the peace until elements of Lebanese politics started interacting together in a transactional manner. The other irony of this was the stabilizing role of Hafiz Assad in creating peace with strength. When he died he was on the telephone with Mr Hariri the prime minister of Lebanon. Lebanon's political structure can be template for peace in Syria. The alternative in the MAD MAX world Syria has become. Russia is needed for this including Russian military as Putin is clearly happy to go further than the west.

Only Russia has the tactics and capability to end this Wahabbi terror. Chechnya should be a good benchmark. They will simply flatten the terrorist hovels, but the US may not like its proteges being destroyed.

US has now acknowledged military contacts with Russians in Syria as their presence increases. Even the Syrian FM has said that Russians will fight in Syria if there is a need. But my guess is that it would not be needed if US, Saudis and Turks end their support for the foreign Wahhabi terrorists who make up the bulk of the terrorists. The Russians with live satellite feeds and UAV battlefield surveillance can wreak havoc on the exposed Takfiris. Raqqah and eastern Syria is totally exposed desert with no cover or vegetation. If the Russians used FAE and new anti personnel cluster and HE ammo the Takfiris will be toast as soon as they venture out in the open. From all reports they have stopped moving around in Toyota pick-up trucks now and keeping a low profile. From Takfiri websites and independent videos, the Syrian airstrikes in Raqqah and other eastern desert areas have been quite relentless and destructive. This is just an opening salvo as the end game nears.