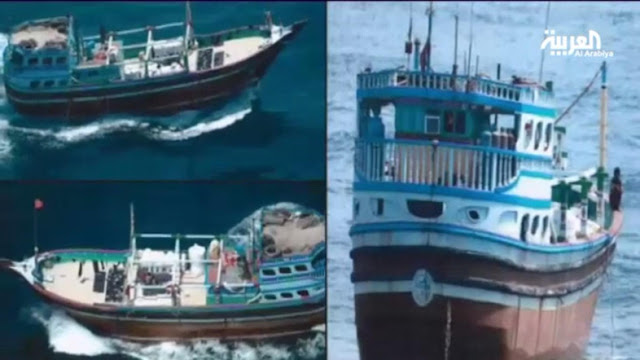 The Saudi/UAE-led coalition announced today the capture of an Iranian dhow carrying weapons last Saturday near Oman’s southeastern coast of Salalah, seizing a number of rockets and missiles, anti-tank missiles, armor-piercing shells, and weapon guidance systems. 14 sailors aboard the ship were also arrested. The boat was registered under an Iranian citizen’s name for fishing purposes. (Al Arabiya, 30 September)

“The type of weapons that were recovered on Saturday confirms Iran’s desire and intention to interfere in the war in Yemen,” said Saudi Brig. Gen. Ahmed al-Assiri, the coalition’s spokesman. (Al Hadath, 30 September)

There were no immediate comments from the Iranians. Iran has in the past tried to ship weapons directly to the Houthis in Yemen, but was prevented by coalition forces from entering Yemeni ports. If the details of today’s report are accurate, it shows Iran is shipping arms to Oman for possible land transfer to Yemen.

I don't get it, what does this have to do with Oman?

The boat is reportedly seized near the Omani coast. The theory is that Iran ships arms to Oman for transshipment by land to Yemen.

So now the Arab-coalition is monitoring Oman's coast? I thought the UN only allowed them to monitor Yemen's waters. Now the ship wasn't inside Yemeni waters when it was seized, was it?

Dear Nader thanks for this site, I read it everyday. But on this article the people I trust less than anyone else on this whole plant is the demented oily kingdom of doom and death. Lying is in their DNA.

Strange....first, there is nothing called "Arab coalition" as they are bombing a sovereign Arab country, i.e. Yemen. So a better term would be Petro-Arab Coalition + Egypt. Sometimes the media coining terms which are not reflecting the reality.
Secondly, how come a ship from a sovereign country like Iran is suddenly seized in waters not belonging to the country in conflict, i.e. Yemen?
Hope for peace and harmony in the entire region as it desperately needs it.
Does this mean that Iran Navy or IRGC Navy can stop Saudi ships going to Iraq or Pakistan as well?
The International community has rules and regulations and one cannot unilaterally redefine them or we will end up having chaos.

There are few questions that needs to be answered. Could a ship be searched and seized in Omani waters without Oman's consent? And why a shipping dhow is carrying so much weapons? Was it engaged in arms smuggling? We need to follow the story to find the answers to those questions and we'll do that.

Some observers are dismissing this claim, pointing to the fact that items in this weapon haul appear similar to one taken some time ago, and the need to deflect criticism from RSAF targeting of civilians, i.e. the wedding party incident.

I think this should best be characterized as a claim.

Also I don't think the term "Arab coalition" applies. Much of the intelligence, logistics and weapons provision is U.S. provided, and to a lessor extent Western provided, while a number of the combatants are subsaharan African. However, the Ansarullah and Yemeni Army side is indeed entirely Arab, while Iranian allied.

Saudi/UAE-led coalition is the correct term as used most often in our posts. The titles need to be short, but still it was better to use the long term, agreed.

All news coming from the region need to be scrutinized. That's precisely why when we say if the report is true, etc.

Have you seen the photo that was taken some time ago showing the same dhow and same weapons onboard? Who are those observers?

For someone who follows the news from the region, you should know that reporting developments in the region cannot be possibly about whom we trust, probably none! But we still need to know what's happening in the region.

And thanks for reading this site regularly; that means a world to us.