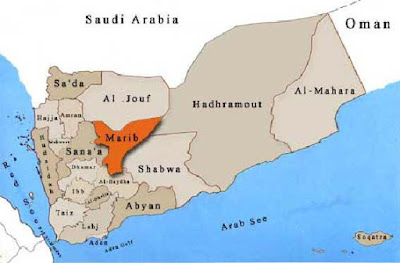 In a major victory for anti-Houthi forces, the UAE-led fighters today took control of Mareb City in the center of Yemen, breaking the Houthi siege of the strategic town and pushing the Houthi/Saleh forces into the surrounding mountains, AP reported. Mareb City is 200 km (125 miles) from Sanaa, the country’s capital that was captured by the Houthis last September. Now the advance of the offensive forces toward Sanaa, if they choose to launch it, could be slowed down due to the mountainous terrain between them and the capital.

The Houthis should get serious about peace negotiations while they can .

As of 15SEP15 there was remaining resistance in a district of Mareb. Also, Ansarallah and allied forces have shifted to the high ground beyond the city.

Biggest challenge for the offensive will be maintaining secure lines of supply.

So where was this "mighty" IRGC fanboys were blabbing on about? Looks like Saudi and UAE have shown who is boss there.

Aljazeera reports the battle for Mareb is still ongoing and that coalition forces are still trying to cut off major Houthi supply routes.

The news agencies and Twitter accounts reported yesterday that Mareb City was under coalition control, and the Houthis had moved to the west of the city (still in Mareb province.) If those reports were accurate, then coalition forces could very well been trying to cut off the highway to the west, blocking Houthi access to the city.

I assume that securing the city itself and clearing the western parts of the province would take a long time. The Houthis would be defending their positions outside the city and would attempt to attack the coalition positions. This is not a one-day ops!