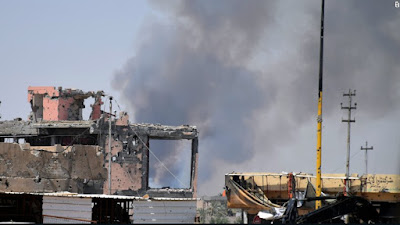 Syrian warplanes mounted several air strikes on the Islamic State-held city of Raqqa on Thursday. The government attacks on Raqqa, the de-facto ISIL capital in Syria, were the first in years and could signal a newly found sense of urgency in Damascus to confront ISIL as the main threat. The government in the past concentrated on fighting the moderate and hardline opposition forces, seemingly conceding eastern Syria to ISIL.

U.S.-led coalition air forces have been targeting Raqqa, waging waves of airstrikes on ISIL positions in the city.

Not first time in yrs, however a good news.

Yeah, I just came across a Syrian relative who laughed at me when I told him these were the first airstrikes in years. Maybe Mr. Uskowi can explain what he means by that.

Air strike on Raqqa by the Syrian air force (not the U.S.-led coalition).

Please extend my regards to your relative. Wish al the Syrians best of luck; hope the nightmare that's the civil war in their country comes to a negotiated settlement.

I will, thanks. I was talking about the Syrian air force too, but I haven't found any article on the internet that confirms what my relative said. I guess some people (anti-Assad Syrians) are trying to belittle this piece of news by claiming it's not news at all.

Piruz, Mark: My apologies, I should have stated in a long time, not years. The essence of the argument remains: fighting ISIL in eastern Syria was not a priority for the regime. Even if they attacked Raqqa in November 2014, since then they have launched hundreds of airstrikes in areas under the control of groups other than ISIL. With the intensity and frequency of the attacks today, it appears that they are signaling that countering ISIL is serious, as ISIL in increasingly seen as the main threat.

This is very good development and shows renewed vigor by the SAA. The new Russian precision weapons like the GROM (Thunder) family are being deployed and the next major air assault will by the rapidly expanding Russian SU-24/25 force being built up at Latakia. The Russians don't play by the Marquees of Queensbury rules and if Grozny is a example, then they will simply flatten Raqaa as it is a small dusty desert outpost anyway and of no real strategic value besides being a Takfiri rat hole. After Raqaa has been softened a heliborne assault may be in the works as Iranian regular special forces are also now operating out of Damascus as per Soleimani's visit to Moscow. Russia has deployed some of best elite and battle tested Spetznaz and naval marine units in Latakia and Tartus, veterans of the Crimea campaign.

As mentioned earlier Russia has delivered new attack helicopters, T-90 tanks and radar based high precision 155mm artillery to the SAA. It is also apparent from video feeds that GROM (Thunder) precision ordinance was used by Syrian Air force. Syrians are now again using the SU 24 Fencer heavier attack aircraft with the weapons and the strike in Raqqah was quite devastating and accurate.

"The weapons are highly effective and very accurate, and hit targets precisely," the source said in response to a question about Russian support. "We can say they are all types of weapons, be it air or ground."

Despite the differences in design, both bombs were based on the KH-38 multirole laser-guided missile. The initial construction was modified with wings, and its payload was also updated with a special focus on COIN operations and precision strikes.

One of the main features of the Grom bombs is their module design which allows for combining various types of payloads and guidance systems. Four types of inertial guidance systems, laser, active radio-radar, thermal-imaging, as well as satellite navigation.

The Grom smart bombs can be equipped with blast fragmentation, penetrating or pellet warheads. The bombs can hit both ground and surface targets in coastal zones. Various types of payloads allow for destroying light and heavy-armored targets.

"One of the principal advantages of this type of bombs is that they are powerful and at the same time not that expensive in development and production," military analyst Ruslan Pukhov was quoted as saying by Rossiskaya Gazeta.

"What is more, this type of bombs is easy to use. The pilot doesn’t need to be heavily trained for this. It is a 'fire and forget' bomb. It can find the target on its own," he explained. The GROM family is ideal for Syria.

Raqqa is a small desert outpost? You're obviously either not a Syrian or the sort of arrogant fool who thinks Damascus is the only important part of the country. Perhaps the Russians could flatten your home town while they're at it.

Name calling and ignorance is no substitute for a brain. Raqqa is a small dusty town of barely 200,000 when it Syria was at peace today it has less than 70,000 captives of Wahabbi terrorists left. You are obviously not even from the region to know that Raqqa is destert outpost with no real historical significance or strategic value. The total SAA garrison there was less than 2000 men and the airstrip is small 1 km long and was used as back up in case of war with Zionists. Its only relevance is the Tabqa dam. I think you need to travel a bit and understand the adult world.

With all due respect, dusty or not Raqqa is de facto capital of ISIL in Syria; and ISIL practically controls eastern Syria. And you don't need to travel much in eastern Syria to realize that the place is controlled by ISIL.

The unfortunate fact is Syria might not actually exist the way we knew it. Two dozens groups, including the regime/QudsForce/Hezbollah/Shia militias and a host of anti-regime groups, including extremists like ISIL, each control a part of what was Syria. The challenge is to find a way that great majority of these groups agree to co-exist under a unified state. And that might be a too-optimistic a solution or wish, no?

Gorm or similar weapons are not powerful enough to defeat an insurgency that controls most of the country's territory. Russian aids will of course be a great boost for the regime, but probably as supporting it not to lose Damascus/Latakis corridor. The answer to this conflict is not Grom or other Russian or Western weapons, but a negotiated settlement to a civil war that has been going on for nearly five years. Russians know that too, probably too well based on their own experiences in places outside the traditional Soviet influence.

Nader, I am more optimistic if the US cuts back on the regime change delusion. Congress is not happy with the waste of money like the $500 million to train 5 terrorists. I don't believe Syria will break-up as it is in no ones interests and set a precedent. Sykes-Picot was a disaster by itself and pax US-Saudiana would be regional suicide. The main point of Russian intervention is to maintain the status quo and make it clear the so-called Jihadis will not be allowed to win. Europe is on board as Rouhani is going to Paris and even US is now talking to Russian military. From day one, it was clear that the Syrian terror campaign was a foreign sponsored one, even though Assad's Mukhabarat (secret service) mishandled the initial peaceful protests. The main terrorist in Syria is now a US trained Chechen, so what relevance would such "opposition" have for the hapless Syrian people?

I agree that military solution will not be possible, but how do you negotiate with Chechen and other foreign terrorists whose only agenda is death and destruction and they have nothing to lose?

You can go back to the posts on this blog in 2011 to see the pics and videos of massive peaceful demonstrations by the Syrians calling for democratic and anti-corruption reforms. Assad's regime responded with tanks and bombs, and later "upgraded" to barrel bombs, and made the space for the growth of all types of Islamist hardliners including ISIL. Now the regime should be part of the solution, which could only be a negotiated settlement of the conflict. Russian army could indeed help Assad not to lose more territory beyond what it already has. But Russian military will not be the answer to the Syrian problem.

Syrian civil war pits all types of groups against each other. On the regime side, you have the army, the Quds Force, Hezbollah and foreign Shia militias, some of whom are as barbaric as Chechens. On the opposite side, you have an array of small and large groups, from more moderate opposition to extremists. ISIL-type groups on Sunni side, and Shia militia groups on the opposite side are not going to be part of negotiations. The willing and able parties who still believe in a future for Syria should form the nucleus of a negotiated settlement to the conflict.