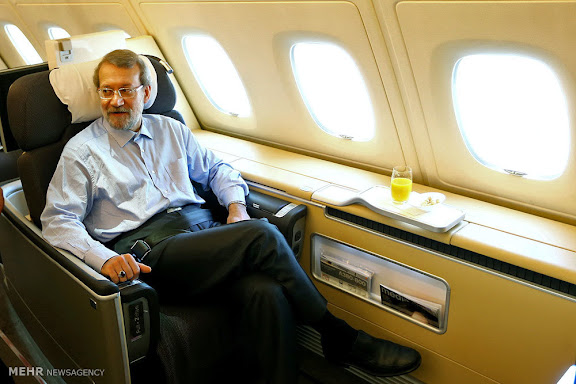 For travel to the United Nations on 29AUG15, Iranian Speaker of Parliament Ali Larijani flew first class on a Lufthansa A380-841. (Flight details provided below, sourced from Flightradar24.)


[Larijani] is scheduled to participate in the Fourth World Conference of Parliament Speakers convened by the Inter-Parliamentary Union (IPU) in cooperation with the United Nations at the UN headquarters.

The Iranian official is expected to hold talks with his counterparts attending the conference on various issues including mutual interaction, economic development and joint ventures as well as key regional and international matters.

During his stopover in Frankfurt, Germany, the Iranian parliament speaker had a telephone conversation with German Foreign Minister Frank-Walter Steinmeier, where Larijani said Germany played a positive role in nuclear negotiations between Iran and the P5+1 group of countries - the US, the UK, France, Germany, Russia and China.

He expressed hope that exchange of visits between Iranian and German officials would improve economic relations.

The German foreign minister, for his part, said the ground is prepared for the expansion of ties with Iran in all fields given Tehran’s great capacity for enhanced economic cooperation.

Larijani met with his Japanese counterpart Tadamori Oshima on the sidelines of the Fourth World Conference of Speakers of Parliament convened by the Inter-Parliamentary Union (IPU) in New York. According to PressTV:


The top Japanese parliamentarian... said his country stands ready to work with Tehran to help promote peace and stability at regional and international levels.

Japan is prepared to open up a new chapter in its relations with Iran on political, parliamentary, economic, trade and cultural fronts, Oshima further said.

Meanwhile, Hossein Sheikholeslam stated that two unnamed U.S. senators have requested for a meeting with Parliament Speaker. According to Tasnim News Agency:


Hossein Sheikholeslam, the adviser [to Larijani] pointed to requests by two unnamed American lawmakers for a meeting with Iran’s parliament speaker, saying, “There has been talks (on the issue), but nothing is finalized yet.”

Sheikholeslam also announced that there are speculations about Larijani’s meeting with a Saudi Arabian delegation, saying that if it happens, it would be aimed at showing Iran’s goodwill as well as reminding Riyadh of the repercussions of its behavior.

COMMENTARY: Iranian Speaker of Parliament Ali Larijani is a supporter of JCPOA. 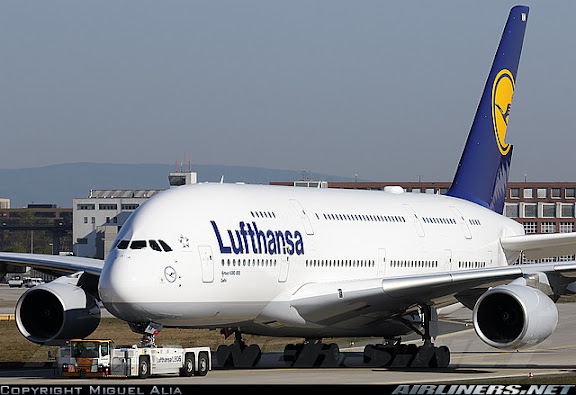 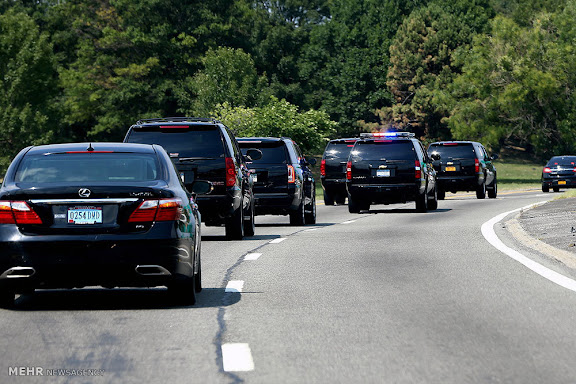 Motorcade and security provided to Larijani's diplomatic delegation, on the move from JFK to Two United Nations Plaza 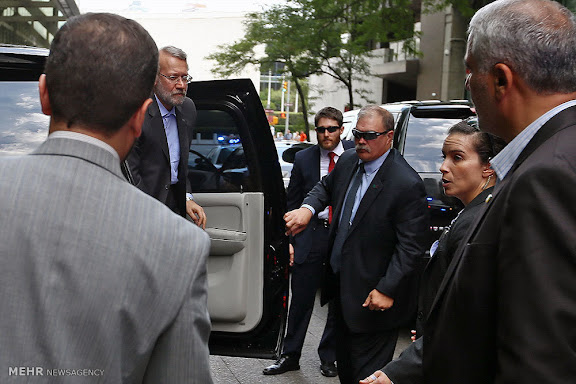 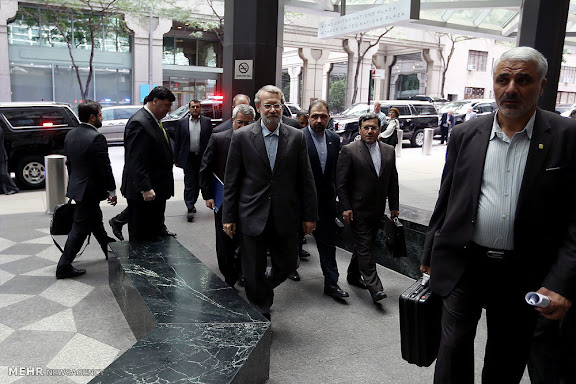 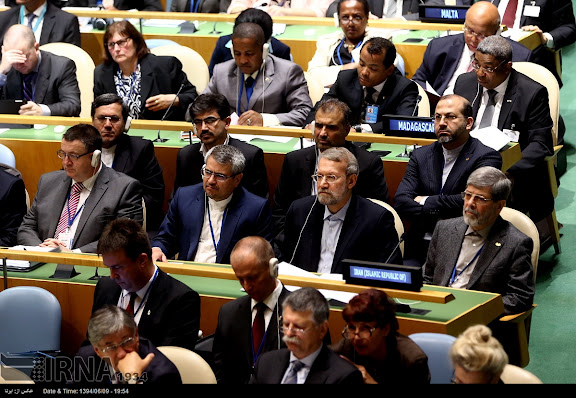 Iranian Speaker of Parliament Ali  Larijani seen 31AUG15 participating in the Fourth World Conference of Parliament Speakers convened by the Inter-Parliamentary Union (IPU) in cooperation with the United Nations at UN headquarters. 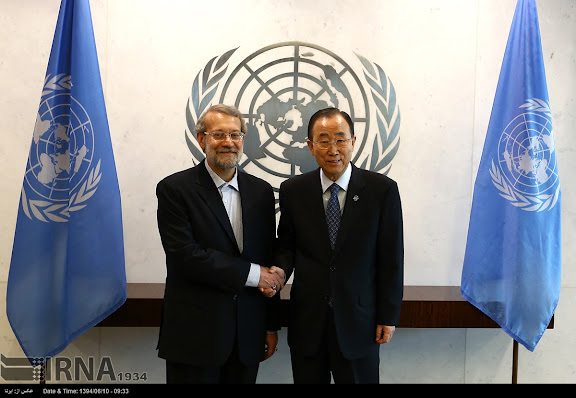 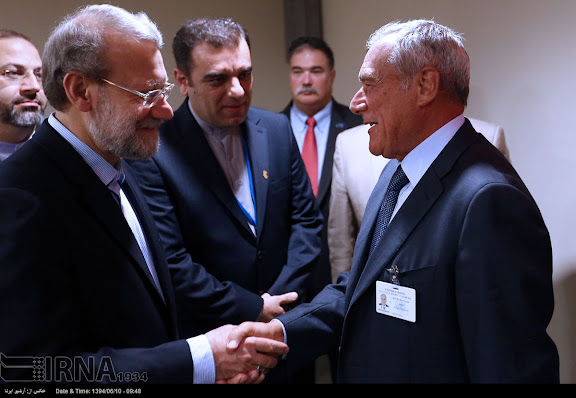 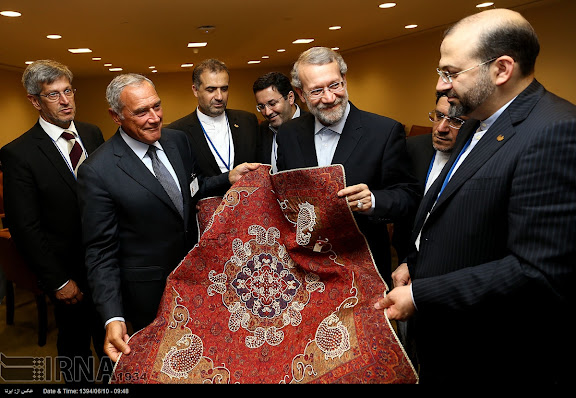 Exchange of gifts between Ali Larijani and Pietro Grasso

At least he flew commercial and that is good. An Iranian airforce VIP jet would have cost over $150,000 in fuel and other landing charges. Zarif should follow his lead and travel on commercial flights.

In the past B707 reg. EP-AJD made a rare trip to NYC. It's been upgraded since but they didn't use it for Larijani's trip.

The photos by IRNA didn't show how many of Larijani's delegation flew first class on the LH A380. Larijani's ticket first class one-way could have cost between $7500 to $10,400 depending on details.

You can tell in the above first photo how much more comfortable the A380 trip is compared to EP-AGB or EP-AJD.

Unusual to see so many photos published of a diplomatic delegation arrival site, vehicles, route, security personnel and destination. More were published at IRNA.

Thanks as always Mark. Keep the objective info and commentary coming. It is much appreciated.

I wonder what in flight movie Larijani and his friends watched? May be it was the American Sniper may be it was interstellar? Because he was supportive of BarJam when he got to New York before that he had not express a preference. His 2 brothers including crazy Javad and Jallad Sadegh are against!

Hello guys, you have been comforting yourself with jokes, because your ideas that the Islamic System will collapse, have failed.
The Islamic Republic becomes stronger, because they have so many smart leaders, supporting their Supreme Leader strategies.........and after couple years Iran will turn into the economical and military world power.

Supreme leaders greatest strategy was to support Ahmadinejad in 88 and turn an election about Ahmadinejad into a referendum about his leadership and even 5 years later can not let go of how much he loves rejime ekhtelasi Ahmadinejad. Iran does not have good leaders Qatar has good leaders which used our weakness to create a infrastructure to steal our oil and gas Emirates has great leaders which used sanctions as a means of becoming a global trading power finally Saudis have good strategy which enabled them to become the regional policeman and pick off Irans regional friends one by one buy some and destroy others. Now that Rouhani and Zarif have taken one step to limit the damage the ekhtelasis are ready under orders from Netinyahu himself to turn back the clock. It is in this context that Larijanis apparent support for barjam is surprizing....
PS I have nothing against any strong leader in Iran who wants to see a strong country. I just have not seen many of them in the last 36 years.

If as you claim that "they have so many smart leaders" why have they lead Iran into such a big mess that has left the country near bankruptcy? Maybe you are comforting yourself by believing in your own press?

Anon 3:14 AM.....You summed it up very correctly. Because of the self centered way the present system operates they have allowed these small artificial countries to dominate shipping,air freight,trade and commerce and influence in the global network.One good example is Dubai with their dominance as the air hub of the region.Just look how third world our airports are with a population of 80 millions against one and a half million of Dubia.Of course the cheerleaders still use the excuse of sanctions pretending not to know the real reason why the sanctions were implemented in the fist place.We have only ourselves to blame for the bad system that exists in Iran.

Dear West-residing Mollah Regime supporter (I love those supporters of the Mollah Regime who prefer to live in the evil, Satanic West rather than in the super-duper economical and military world power known as the Mollah Regime), I believe that Israel, Saudi Arabia, Jordan, and all the Persian Gulf kingdoms have been around longer than the Mollah Regime (and the Pahlavis were around for over 50 years and the Ghajars for over 100 years, too). I guess all those regimes had "smart leaders", too?

How do you know I am in the West?

Although I agree with you 100% regarding West residing Mollah supporters. But please don't compare this idiotic regime with any other previous one because they are worst in Iran's history.