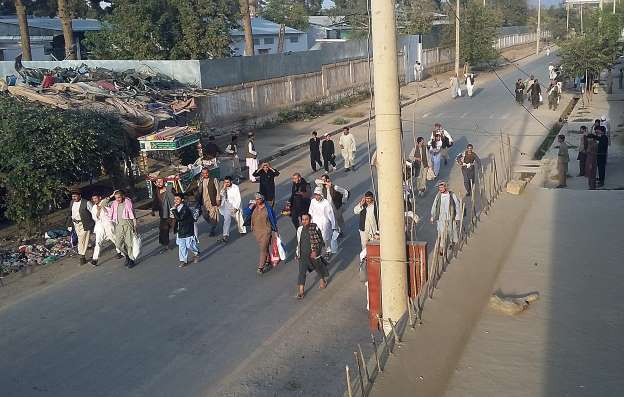 The U.S. military carried out an airstrike on Kunduz today and Afghan President Ashraf Ghani vowed to take the northern city back from the Taliban, who pulled off a spectacular multi-pronged coordinated assault on Kunduz in the wee hours of Monday, capturing the strategically important town.

Afghan military launched a counter-offensive on Kunduz and there are reports today that they have retaken some areas, and reinforcements, including special operations and commandos, are arriving. The U.S. airstrikes against Taliban positions in Kunduz were carried out on Tuesday. U.S. military spokesman Col. Brian Tribus said the goal was “to eliminate threat to the (security) forces.” (AP, 29 September)

The insurgents had still the upper hand in the city on Tuesday, patrolling major streets, setting up checkpoints, searching for government loyalists and sealing off exit routes for anyone who wished to escape, AP reported. They emptied banks in the city of cash and seized vehicles.

Neither the U.S. nor NATO forces have an operational presence in the Kunduz region. German military control a base in the nearby Mazar-e Sharif.

Photo credit: Taliban prisoners walk on a street after their comrades released them from the main jail in Kunduz. Monday 28 September 2015 (Hekmat Aimaq/AP)

Not quite the same, I realize but this Battle of Kunduz reminds me in ways of the Tet Offensive 1968.

It has the psychological elements of pulling off a spectacular operation in a non-Pashtun region.