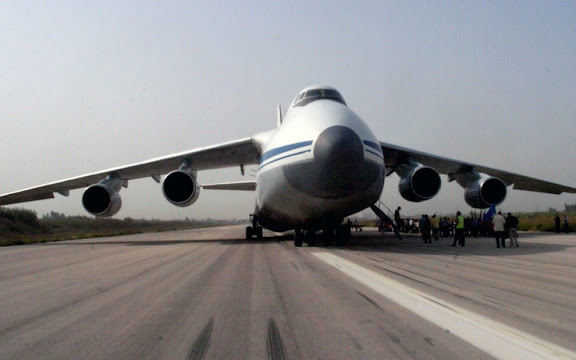 RuAF Antonov An-124-100 Ruslan at at Bassel al-Assad Airport, near Latakia, Syria


Iraq said on Saturday that its military officials were engaged in intelligence and security cooperation in Baghdad with Russia, Iran and Syria to counter the threat from the Islamic State militant group, a pact that could raise concerns in Washington.

A statement from the Iraqi military's joint operations command said the cooperation had come "with increased Russian concern about the presence of thousands of terrorists from Russia undertaking criminal acts with Daesh (Islamic State)."

The move could give Moscow more sway in the Middle East. It has stepped up its military involvement in Syria in recent weeks while pressing for Damascus to be included in international efforts to fight Islamic State, a demand Washington rejects.

From an objective military standpoint, such cooperation is logical. It's also possible maintaining of the logistical air bridge over Iraq to Syria was discussed.

This move comes not only at a time where Russia has landed a significant military force into Syria, but also at a time where Baghdad is experiencing political crisis and military stalemate.

The move further enhances Russia and Iran's peace process for Syria, which will be the subject of discussion on the sidelines of the UN General Assembly session now in progress.

It is even being said the Iranians may be included in discussions aimed at resolving the conflict in Yemen, a development a number of European high ranking officials recently advocated while visiting Tehran, seeking post-JCPOA economic ties.
Posted by Mark Pyruz at 3:01 AM

It is long awaited , if true, will anhilate ISIS in real sense. Rizvi/India

This indeed is a major development which could greatly stem the rise of the takfiri/wahabi terrorism in Levant .Undoubtedly what you see here is formation of a nucleus around which a successful politico-military coalition could be built and sustained against the takfiris .It's true that the counties involved are led by very dubious characters , but the short term goal is to annihilate the takfiris such as ISIL
A new fault line is being drawn in the Middle East .Egypt ,Saudi and UAE trying to create Arab Nato , and Putin answered by his Middle Eastern version of a quasi-Warsaw Pact .
If Afghanistan could join the above anti-ISIL coalition , then we' might very well be looking at a long term solution to a long festering problem of wahabi-inspired extremism .