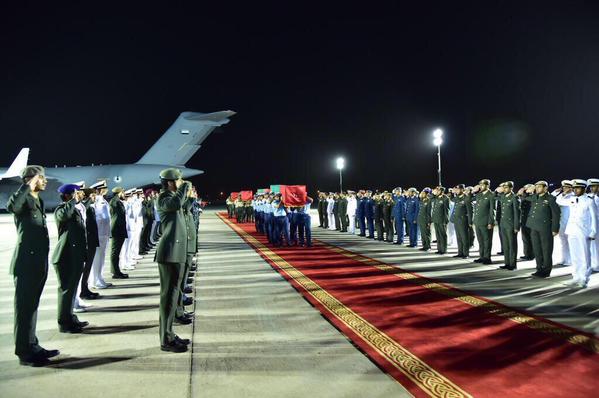 Bodies of the 45 UAE soldiers arrive at Al Bateen airport in Abu Dhabi. The Emirati soldiers were killed at dawn on Friday in their camp near Mareb, Yemen, when a rocket hit the camp’s ammunition depot. UAE has declared three days of mourning to honor its fallen soldiers.

UPDATE: Saudi Arabia and Bahrain reported on Saturday that they have also lost 10 and five soldiers respectively in the Mareb explosion; bringing the death toll to 60. The report by Bahrain confirms that the country's servicemen are part of the Arab coalition-led offensive to break the the siege of Mareb by Houthi/Saleh forces.

UPDATE: UAE announced today that it has launched airstrikes on several targets across Yemen, including the capital Sanaa. The airstrikes came a day after the country lost 45 soldiers in a Houthi rocket attack on its camp near Mareb. 15 other soldiers from Saudi Arabia and Bahrain were also killed in the explosion.

Okay, so Ansarullah says that the number is much higher. I don't of course expect them to hand over the real figures.

according to the Houtis, they are 75

piruz, please note that the Soviet era 'Tochka' works. It found its mark.

It is now clear that the GCC coalition had troubles finding and destroying every single ballistic missile launcher. Similar to 1991, where the "Allied" coalition completly failed to find and silence our Scud launchers.

Though indications point to the GCC having had more success in this mission than the Allied coalition of 91.

With that being said, the Ansarallah fighters have retaliated with few ballistic missile launchers that escaped destruction. The Ansarallah is constantly relocating them. Question is, when the remaining launchers will be spotted and destroyed. Not "if", but "when".

Actually the Kornet and Iranian Kornet E Dehlaviyeh laser beam-riding anti-tank guided missile is doing more damage to the Saudis and the Khaleeji mercenaries. In one ambush south of Taiz a whole convoy of Saudis Le Clerc and older AMX-30, among with MRAPS and M2 Bradleys were decimated by Kornets and the dismounted infantry cut to pieces by RPGs and close quarter Zaidi attacks.The Saudis are taking unsustainable losses and can be seen in the videos as the troops abandon weapons, run off and leave their dead behind. Looks like alot of crow is going to be eaten.

This Saudi led Wahabi aggression without UN mandate but with US approval is not to merely to place one man fugitive Hadi, but all Wahabi nations satisfying them self that they are killing Shia Houties to take revenge of ISIS (Wahabi) killing in Syria & Iraq by Shia led governments.

The Houties paying the price of being Shia only. The best examples is Wahabi air campaign with US against ISIS in Syria which seems totally ineffective only because of ISIS barbarians are of same ideology i.e. Wahabism and that should be kept in mind without government level request of Syria & Iraq to Iranian government as Hadi called in pre planed way to Wahabi Saudi Arabia and its wahabi allies for Yemen intervention , whenever Iranian air force and army come out at combatant level to fight these ISIS insects will be crushed as in pulverizer. Rizvi /India

Your right Brigadier, with the limited arsenal to begin with and some measure of initial success by the gcc airforces it does seem the the Ansarallh/Saleh rocket forces are numbered. This particular incident again shows the effectiveness of rocketry weapons. Hezbollah fired more rockets on the last day of its 34 day war with Israel in 2006. Albeit with less accurracy and dubious targets. In 1991 we all remember Saddam lobbing SCUD terror weapons at Israel, however few remember the 1st and last day of that war when I believe a Saudi ministry building and a US Marine base took direct hits. An effective port denial weapon no doubt. Brigadier and Mark Pyrus do you have some insight into the guidance sytems and technology between the 91 scud and a 2015 Tochka?