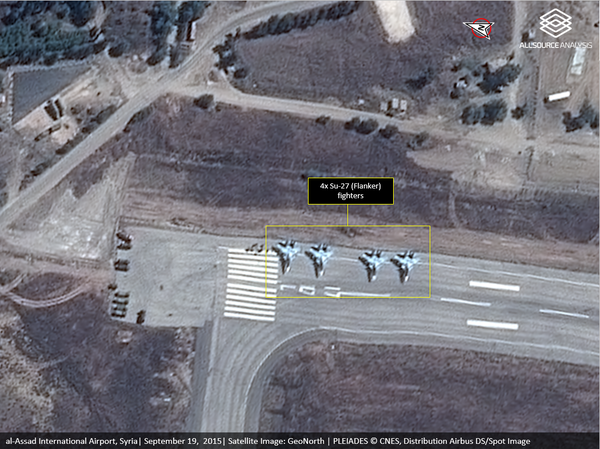 
The airport at Latakia is also the scene of ongoing construction of a major Russian base in the country, including reinforcing the runways, building helicopter pads, installing mobile housing units for hundreds of personnel, and putting up several buildings including an air traffic control tower.
On Sunday, the New York Times reported that Russia’s military buildup in Syria includes surface-to-air missiles as well as combat aircraft with air-to-air capability, questioning Russia’s insistence that the buildup is for fighting the Islamic State, which does not have an air force. Instead, it appears the base at the Alawite country could be a permanent Russian military outpost in the Middle East, something Russia has always wanted and now the chaos in Syria is allowing it to establish the military base at a strategic location.
Top photo: Sattelite image showing four Su-30SMs at Latakia airport (GeoNorth/The Aviationist)
Bottom photo: Inflight Su-30SM 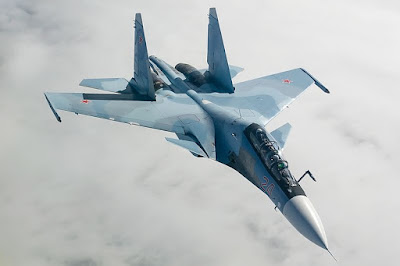 Latest satellite images show over 30 aircraft and 8 attack helicopters. So far SU-30, SU 24/25 and Mil 35 attack helo are visible and number of 155mm smart artillery, T-90 tanks and BTR and the build-up continues with both Greece and Iran providing flyover rights. 6 Condor flights a day now.

The Russian credibility as a super power in context of middle east is on stake. It is right time for Russian to step in middle east scenario. There are big numbers of ISIS terrorists in Syria from Russian cacasiosus region with BLOCK HEADED Wahabi ideology with funding of Wahabi Saudi charities (Saudi sponsor).

ISIS is present and clear danger for Russians directly, till now all Wahabi persian gulf Arab states directly arming, financing & intelligence sharing with different Wahabi ideology terrorist groups like AL Nusra, Ahrar Sham etc., they are second brand of ISIS and not less than that in any parameters, nobody can differentiate them with ISIS gruesome acts.

At present Syria is completely surrounded by Wahabi Arab states (Not Sunnies) with Turkey as a main transit point for ISIS to Syria. Russian & Iranian help is back bone of this regime for survival.

Russian entry in the volatile scene at this juncture, causing nervousness in Wahabi states and there calculations may be go wrong to topple Assad by force. Many thought that Saudi Arabia luring Russia with very big contracts and arms deal to relinquish Assad, but Russian has its own regional calculations and combination of threat from ISIS.

On southern border of Russia, is fertile land for ISIS with Wahabi ideology. If Russia overlook its southern border as thousands of ISIS generated from this region to fight in Syria and still going on, will become HOT BED for Russian.

Its time to clearly understand war against ISIS by US led coalition with Wahabi Persian gulf Arab states doom to failure as ISIS also settling score against the Shia led government in Iraq & Syria on behalf of Wahabi Arab states.

The UNCUT scene of fight against ISIS is revealed by US media itself " Fox news 28 May, 2015, Sen John McCain, R-Ariz,recently complaint that 75% of pilots are returning without dropping any ordnance, due to delay in decision making up the chain of command." In same Fox news item it is mentioned "One Navy F-18 pilot who has flown mission against ISIS voiced his frustration to Fox news that there were many times I had groups of ISIS fighters in my sight, but could not get clearance to engage. He added They (ISIS) probably killed innocent people and spread evil because of my inability to kill them".

After this revelation, what more is required to established Wahabi Arab states paying such a huge bribe to US in form of BIG arms contract to NOT more harm of ISIS by US. It is worth mentioning that ISIS and Persian gulf arab states are follower of same religious ideology that is WAHABISM based on HATE to Shia followers across the globe and expand Ultra radical Wahabi Islam ideology through GENOCIDE and RAPE.

If Russians intentions truly based to annihilate ISIS in Syria, it must be welcomed. Rizvi/India

Unless Putin knows something about fighting insurgency that the rest of the world doesn't , these shiny fighter jets won't do much to alter the dynamics of the Syrian civil war The build up around Tartus and Hamidiyah has more to do with Russian posture in Mediterranean and Black sea .

Russians will teach the good for nothing hizbullahis and Syrians a lesson in how to fight terror...you wait and see...Many of these terrorists are chechens Abkhazians and Georgians.

Don’t you think it is rather Assad himself that kept on begging Russia for such solid establishment for years dating back all the way to the early-mid 2000s ? Indeed, it’s only logical that the regime would seek to add all the possible geopolitical and military weight to its standing in the Middle East, when one considers the dozens of major US military installations hosted all around it on the soil neighboring countries that happen to be at the same time currently the main backers of its enemies at home? Namely the KSA, Qatar and Turkey, all fundamental tenants of American projection power in the Mideast through its sprawling, multi-billion-dollar infrastructure and tens of thousands of military personnel stationed there permanently. In my opinion it is with big reluctance and out of a sense of dire urgency that Moscow finally decided to mobilize this way in order to keep its sole strategic access to the Mediterranean safely open.

Militarily, the emergence of such buildup will not change the global balance of power. It will only add to a decade’s old, existing alliance. After all, what’s a couple Russian bases in one ME country, compared to close to a hundred American ones in 90% of the region’s countries, notably through the so-called GCC “security structure” + NATO members around the Mediterranean ? Tartus and Lattakia have long been de facto "Russian zones of influence" in Syria anyway, dating as far back as Hafez Al Asad's rule. Plus, Putin was quick to declare overt coordination with Israel on its area of operations, so we're not even talking about an unconditional, fully-fledged protectorate in the making here.

After all, from a purely geostrategic standpoint, and of course notwithstanding the viciousness of Assad’s’rule and the many, self-interested and destructive, megalomaniac gambles he shamelessly made and continues to make against his own people, or the morality of a foreign power interfering in another country’s affairs (that has been the norm during almost the whole of this conflict) it was in my view a quite expected development to see Moscow make it clear to anti-Assad forces sponsoring armed insurrection on Syrian soil, that they too, are hell-bent on protecting their vital assets in this part of the globe. And so, no matter the financial or material costs incurred. In that regard, they aren’t more or less opportunistic or interested as a party to this multi-sided conflict than any other. A risky move, and another gamble this time on the part of Putin. Time will tell very fast if today's Russia can handle such expansionism never seen since the apex of the USSR's power.

Bottom line is that this latest major involvement by such a powerful actor is bad news for Syrians on the long-run, since it will generate serious counter-efforts by the opposing parties, appeasement is completely out of view once more, de Mistura must be quite desperate right now...
One obvious advantage on the other hand is that we won't see the likes of ISIS overrun remaining parts of populated "essential Syria" that easily, if at all, and entrench themselves into the whole of the "useful" parts of the country, rendering it virtually impossible to suppress it short of a total, nightmarish conflict involving combined air & ground ops by foreign forces with no guarantee of success. A bit like what has been going on with Kabul with ISAF/Afghan security force or Baghdad with the PMF/Sunni tribes/Iraqi Security force/ Coalition strikes : a bitter status quo ruining a generation one day at a time...

Russia does not produce SU-27 anymore and most have been upgraded to SU30 and now SU-35 standards. The aircraft deployed in Syria are SU-30 multi-role fighters for air superiority and precision ground attack. The SU-30 is the most maneuverable aircraft in the world and in simulations has out-performed the F-22 and the ill-designed and over budget ill-fated F-35. Even the Indian SU-27 which are far inferior to the Russian upgraded SU-30 proved superior to any western fighters in recent joint exercises. Plenty of videos on line.

Well Russia does know a lot about fighting Wahabbi terror successfully, just look at Chechnya and how peaceful and subdued it is now after Grozy was flattened and rebuilt. Russians don't play by Marques of Queensbury rules.

Dear Anon 03:27
You mentioned that Assad has been begging for Russian help for a long time . Russians involvement in fighting ISIL certainly is a very welcome development
Assad regime may wonder whether Putting is trying to prop it up or simply throw it under ( under the bus that is ) .

Russian experience in Afghanistan was hardly stellar and in Chechnya they only fought a small population of barely 400,000 at most and total Chechen military strength was less than 3,000 armed men and they killed perhaps four times that many Russians who only subdued them by leveling Grozny and displacing all the civilian population. I don't believe Russians will engage in rubble to rubble fighting in Syria but use precision strikes and act as a backbone to the floundering SAA and Hezbollah who simply don't have the manpower to keep on taking attrition from Wahabbi terrorists who have an unlimited cannon fodder supply from the Saudi funded madrassa brainwashed terror factories of Pakistan, Maghreb, South Asia and Caucasus. Only when the cost to the Saudis becomes unbearable in Yemen and elsewhere, then this terrorism will stop. Russia has to take a multi-faceted strategic approach as military might alone does not "win" asymmetrical conflicts and Vietnam, Afghanistan to Iraq are glaring examples of such folly. A clear example of Russian resolve should be to clear out the terrorists from Raqaa as that would be a good morale boost for Syrians and signal end of the line for Daesh terrorists.

Russia inserted into the Syria its unsinkable 'aircraft carrier', and will stay there for decades. At least Russian must; and expect to, be accepted as a long term peacekeeper force.....

Whoever will question that, is out of solution answer.

Correction of my previous post. Russia has 40 fighter-bombers deployed.