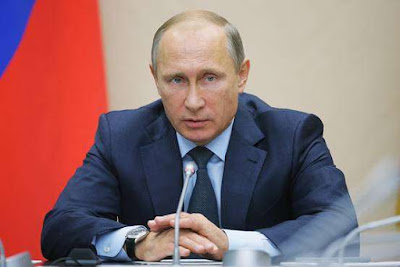 Russian forces are expanding their military presence in Syria beyond Latakia airfield, south of the Mediterranean port, where Moscow has deployed more than two dozen combat aircraft. HIS Jane’s reported today on additional, previously undisclosed, Russian military buildup, including a weapons depot and a military facility north and west of Latakia. The satellite images from mid-September suggest that Russia is preparing to place troops in both places, according to Robert Munks, editor of HIS Jane’s Intelligence.

The images, acquired by Jane’s from a commercial satellite division of Airbus Group, show construction of new buildings, the presence of new tents typically used by Russian military units and significant development of the grounds, Munks said. (HIS Jane’s, 22 September)

President Putin’s move in Syria is the first military intervention by Russia or Soviet Union outside the former Soviet zone in more than 30 years.

Russian marines clashed with ISIS near Latakia, Syria, on Sunday, according to Russian media.

During the fight the marines allegedly killed several militants and captured others after ISIS attempted to attack an airbase operated by Russian military, reported the Russian newspaper Segodnya.

Interestingly, the newspaper also reported the ISIS militants “possessed a detailed plan of the air base and clear satellite imagery with the marked key military installations,” but Russia has only been operating the airbase for the past week or so.

That begs the question: who provided ISIS with that kind of intelligence?

As of this time, there are information that there are dozen of Su-24, dozen of Su-25 in addition to four modern Su,and 15 attack helicopters, as well as nine T-90 tanks , drones and other equipments.

Putin is a master of many games, the isolation of Russia is crumbling, and as many say Putin gets what he wants....

The Islamic Republic outlook for its future is improving steadily in many directions.

There are reports today that Russian marines and Hezbollah are fighting shoulder to shoulder as brothers in arms to liberate the area around Kweiris airbase, east of Aleppo. As was evident from the Russian force posture, their aim is to secure Aleppo and then move further east to consolidate a safe transport corridor to Damascus. President Putin will address the UN General Assembly and seek western cooperation in this fight against Wahhabi terror, but even if the US scuttles that, Russia intends to fight on regardless. This is too important a battle for Russia in its quest to wipe out Chechen and Wahhabi terror.