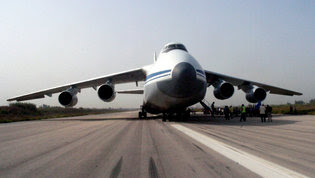 Russia is using an air corridor over Iran and Iraq to fly military equipment and personnel to an air hub south of Latakia in Syria. Giant Russian Condor transport planes are taking off from a base in Southern Russia to ferry equipment to Syria through Iranian and Iraqi airspace. (The New York Times, 14 September)

Russian Foreign Minister Sergey Lavrov was quoted by Russian news agencies as saying the airlift is delivering “military supplies” to the Syrian government, “inevitably accompanied by Russian specialists, who help to adjust the equipment, to train Syrian personnel how to use this weaponry.”

Russia, along with Iran, has been the main supporter of Assad and his regime during the four-and-a-half year civil war.

UPDATE: Institute for the Study of War (ISW) adds positions of Russian specialists to the Syrian map: 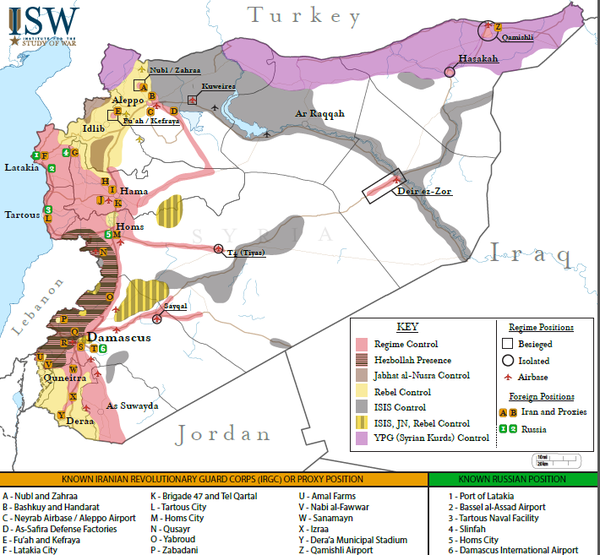 I think this is all for show . Real gear and equipment of any military value are normally transported via sea lanes .
However ,regardless of how these equipment get to Syria , let's hope they actually accomplish what they're intended for : to degrade takfiri terrorists .

Exactly, the Condors have been taking humanitarian aid of about 50 tons each like tents, medicines and field kitchens. The upgraded Pantrir S1, S-300 and the lethal T-90's first seen in the region have all come by sea in the 4 Russian troop and supply ships that passed the Bosporus. In one footage on ITV, a very tough looking Syrian Republican Guard unit headed by Colonel Ramzi Sultan had T-90 tanks parked in force near Daraa and the morale of the troops was very high with photos of Dr. Assad and President Putin everywhere. The Russians are not about to let the takiri terrorists get hold of Damascus or any major city. Media reports indicated a build-up of SU-24 ground attack jets at the expanded airfield at Latakia with new hangers being built and the Spetznaz security ring pushing east. The GROM (Thunder) precision ordinance shown at MAKS is about to be tested on the takfiris and the results would be devastating in open Syrian terrain. The days of beheadings are coming to an end.

Anon 5:38 AM, there's no need to get so excited over Russian presence in Latakia. The reason they're intervening directly, and building a base there, is because Assad is losing ground, and fast.

4.5 years of Russia's efforts to arm Assad and sending advisers, as well as the iranian efforts to also arm Assad and sending hundreds of their own advisers and thousands of foreign Shia militias, including the Hezbollah, have not saved Assad quite yet. The Russian latest move will of course help Assad, but more as a defensive measure to stop the collapse of the territory under his control, which is not much of Syria's.

Let Russia send in their fancy garbage.It won't save Assad or his regime from people's anger.Russia is doing the same mistake in Syria as they were in Afghanistan.

And the same mistake that the US is now making in Afghanistan and has been persisting on doing for an even longer period of time, and in a more ruinous fashion than Soviet Russia did. And so for the same results that is the extremist elements getting ready to gain power the day foreign boots are out. That is entirely correct. Both Cold War powers will see their past regional hegemony wane away in the coming decade by refusing pragmatism and instead so obstinate on perceiving matters through the sole prism of geopolitical gaming. So sad for local people...

Anon 10:36 - it is not "People's anger' that is gaining ground today in Syria, it is rather foreign supported extremist brigades, well-armed and well-funded by neighboring countries maintaining corridors and some through adjacent provinces, namely Turkey. On every front. So-called "moderate forces" are fringe in all battles at best and don't count strategically or tactically. People's hate today translates in inaction, exile in the face of advancing djihadists, or draft dodging at most. But that hasn't turned (yet) into a mass armed uprising suppletive of Nusra, ISIS and the likes of Ahrar Al Sham. Syria's Revolution has long gone from a legitimate, genuine, and liberal uprising against tyranny to a multi-faceted umbrella of proxy battles fought on both sides of the regime, rather than anything taking its people's aspirations into account. Let's not be naive about that reality anymore and kid ourselves about fairy tales of good people taking down a bad regime, please... Syria is another 80-90s Lebanon and will remain so for the coming years with no sign of appeasement with such additionnal involvement from a major player.

Dear Anon 12:46
Comparing US involvement in Afghanistan to that failed soviet invasion is patently false . U.S achieved most if not all of its objectives : ISAF completely destroyed Al-Qaeda in Afghanistan , delivered justice to Bin Laden and decimated the Taliban .The Afghan forces and government are slowly but surely gaining on Taliban and will finish them off in not too distant future .

We know about the US policies.So don't bother to compare.Remember the soviet union fell because of Afganistan war.America still stands and will continue to stand after Afghan and Iraqi fiasco.

Anon 1:08 PM
85% of Syria consists of Sunni moslems.I guess when IRGC mafia help maintain their own puppet dictator bolstered by a foreign army like Hezbollah that will be OK with you?

I agree with Anon 10:36
one reason Syrian regime is doing so badly against terrorists is that it's relying on outdated soviet/Russian tactics and near obsolete military hardware junk .

He is an Ophthalmologist. For simpletons its means an EYE SURGEON and very good one.

Russians are smarter than that to commit mass troops. The SAA controls areas with the majority of Syrian population and the eastern deserts under terrorist control don't mean much. In any case Dr. Assad is going nowhere and here for a very long time. We have heard plenty of wishful thinking for over 5 years now and zilch.

"Achieved most if not all" you say. We must be living in different planets then, because last time I checked, US coffers and its trillion dollar+ debt had never hurt its economic standing in such a catastrophic way in decades. Militarily, the Afghan campaign has barely managed to keep Kabul itself stable and even ISAF's massive presence in the capital hasn't helped prevent the Taliban from doing efficient hit & runs there whenever it pleases, killing/abducting both high-ranking locals and foreign VIPs in official buildings and bases everytime it strikes to this very week. Since 2008 recruitement has gone upwards, its territories have expanded slowly in several provinces and occurences where Afghan security forces actually achieve any victories without massive US support are almost non-existent.

By various post-Bush US officials admission, General Peatraus' "surge" policy was a glaring failure, cost billions, didn't roll back the Taliban as expected and made the ISAF a totally undesirable occupation force in the eyes of the population because of a major hike in collateral damage. Past 2012 the Taliban started to be considered an actor to be reckoned with in any long-lasting solution to the conflict, with Obama openly claiming that there is no military solution to it, and the Taliban opened political cabinet in Qatar. Panetta for his part said that no side can win militarily at this point of protracted conflict, neither the US or the Taliban. The only thing you can call "decimated" is America's initial objective in this country I'm afraid. The Soviets actually managed to leave behind a potent force that scored major victories against the Mujahedeens right after their troops departure. If it wasn't for that vodka-drinking puppet Yeltsin who bowed to US pressure and pulled its continuing support from the Afghan governement altogether on express request from.Washington, it would have lasted longer, even though probably not for too long.

Plus, I would have loved to see how the US fared had the Russian Federation not allowed its cargo planes to cross part of its airspace and its convoys use pieces of its teritory, let alone arming the Taliban as much as the US did during the Soviet invasion. I'd say then it would have become another Vietnam for America as well, keep that in mind when comparing the two campaigns. The American fiascos in Iraq and Afghanistan historically hurt its standing as a global hegemon in the globe, precipitated the fall of its unquestionned geopolitical dominion acquired after the USSR's fall, led it to plan cuts to its military budget by a stunning 10% over the coming decade, rolled back thousands of troops in its bases overseas for the first time in its entire history, not to mention the economic crisis that saw its effects persist for so long in great part because of its massive war effort. Before 2003, Russia and China had decades to go to in order to compete with it in current theaters the way they do, and the US wouln't have been so helpless in witnessing its Iranian enemy establish itself so deeply in Iraq through the PMF, and Russia do the same in Syria namely via Tartus.

Now of course it won't collapse politically the way the Soviets did since the latter were already at the end of failed type of rule. Russian economic collapse occured AFTER Yeltsin started to go all-in for capitalism anyway. Before that they had a crisis, the same way it happens to the whole world today.

Anon 6:00 - that's exactly my point. No foreign involvement is "OK for me". Not the IRGC, not not the Army of Conquest, not Al-Qaeda, not IS.

And you seem to be confusing being Sunni and supporting an ultra-fondamentalist, criminal and self-proclaimed "Caliphate", how much of these 85% Sunnis do support that in your opinion ?

Dear Anon 02:06
Syria would have been a far better and safer place for millions of its innocent people had Dr Assad chosen to practice ophthalmology instead of statecraft and counter-insurgency .Dr Assad had a chance in controlling or putting a lid on insurgency and rebellion in his country but he totally blew it , and blew it big .His cynical approach becomes increasingly questionable when we examine his regime's role in takfiri terrorists gaining the upper hand among the Syrian opposition groups , some of which we could have supported .The esteemed doctor fooled and manipulated much of the outside world . I agree , he isn't one of the simpletons .

Dr. Assad is still the smartest and best of a very bad lot. Now even the western world is changing its stance towards his government as Russia and Iran have made it quite clear that they are not about to abandon him. Rouhani's visit to Paris is going to be quite illuminating as French position is not as dogmatic as the US and they can see the dangers posed by the Saudi funded Wahabbi terrorists who comprise over 90% of the so-called terrorist opposition. Most people don't realize that 80% of Syria's mostly Sunni population lives in regime controlled regions and are very supportive of Assad and secular government as the alternative is worse than hell.