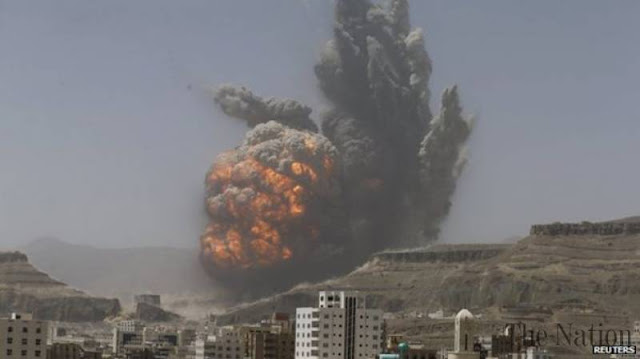 Airstrikes from a UAE-Saudi coalition destroyed a key Houthi and Saleh encampment in the Yemeni capital, the headquarters of the Special Security Forces, on Sunday, with columns of grey smoke rising from downtown Sanaa. The warplanes also targeted weapons caches in the mountains of Noqum and Ayban, east and west of Sanaa. (AP, 6 September)

UAE’s Ministry of Interior posted videos on its Instagram account of Emirati fighter jets targeting the Houthi targets on Sunday. The airstrikes began after an official mourning period following the death of 46 UAE servicemen killed in their camp in Mareb hit by Houthi rocket. 10 Saudi and five Bahraini soldiers were also killed in the attack.

Egypt had 80,000 in the 60's when Yemen's population was 6 million and still lost. No power can defeat the Yemenis on their own soil. The Saudis are reaping whirlwind that will bring the war into their cities as Yemeni tribals make up over 60% of the Saudi military and National Guard. Salman's inept son has got them in pickle.

The tribal leaders in the border city of Najran said they detach from Saudi Arabia and join the Yemenis in their war on Saudi Arabia.

who is benefiting in this war ? as usual the ARMS producing NATIONS !AND again who suffers most in this conflict ? -the common Man in the streets !.

NASTY wars all over !- this is after the UN [an entity that does not exist] took a hibernation !.