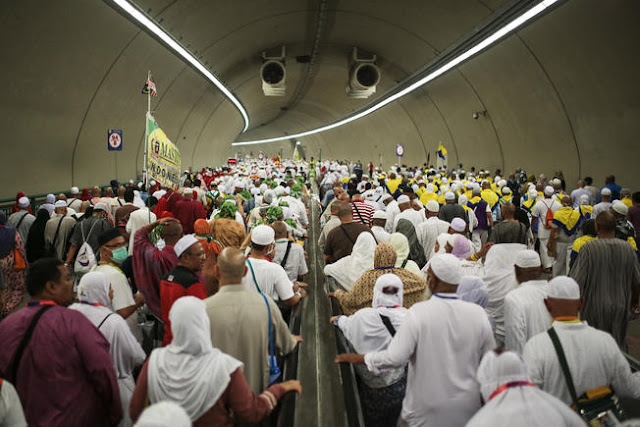 As the hajj religious pilgrimage entered its final day Saturday, the death toll from Thursday’s stampede during the ritual of stoning of Satan at Jamarrat pillars in Mina has risen to 719 people, while 863 were injured, AP reported.

Photo credit: A day after the tragic stampede, Muslim pilgrims walk in a tunnel on their way to cast stones at Jamarrat pillars, a ritual symbolizing the stoning of Satan during the annual hajj pilgrimage, in Mina, near the holy city of Mecca in Saudi Arabia; Friday 25 September 2015 (AP)

Iranians suffered the highest death toll RIP. I wonder if this is a coincidence? In any case the Saudis have allowed these disasters to become regular feature at Hajj. They are incapable of organizing effective crowd control and safety measures even though have enough money to bomb Yemen with $1 billion a week and fan Wahhabi terror.

Religion does nothing but harm people ... a curse on mankind.

If South Arabia government does not come with an explanation and does not come up with a solution to avoid this kind of accidents to happen again in the future, all independent Muslim countries should boycott Hajj next year.

Not everything and anything in the world could be defined by politics. This was a tragedy waiting to happen, and similar instances have happened in years past. The place of worship and conducting rituals during Hajj is physically limited, but each year we get more pilgrims, millions of them, who want to take the same route in a place so limited by space. If few people make a mistake and panic in such crowded environment, you'll have a stampede on your hand. Perhaps the religious leaders could find a way to extend the main Hajj pilgrimage into more than one period. The idea of congregating all able Muslims making the trip all at once worked when there were thousands or hundreds of thousands pilgrims, not like now when there are millions and rising. The religious leaders should come up with a solution for now and for future generations of Muslims.

What is the B.M.A. opinion in those (casualties) matters ?

They send family and basiji members to haj to fill up Saudi Arabians pockets.What they seek is only found within themselves.It is the soul of humans that counts.Not some location on earth.