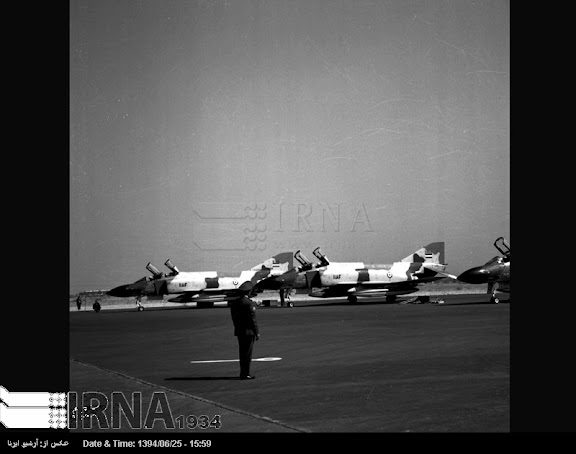 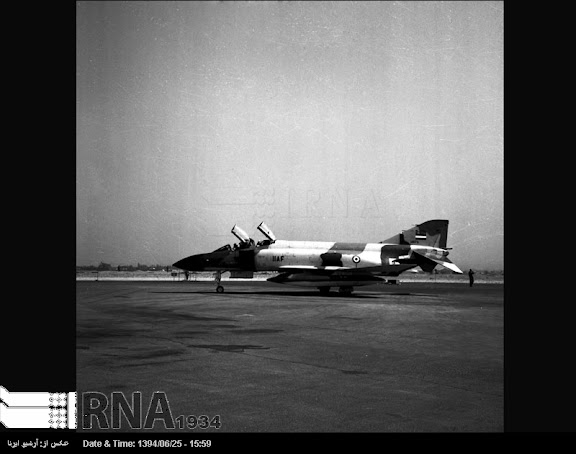 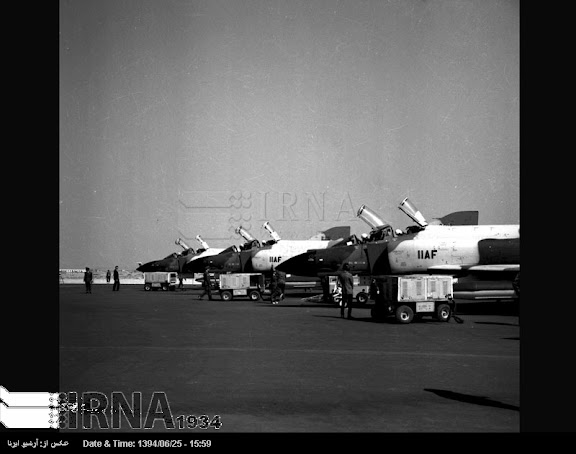 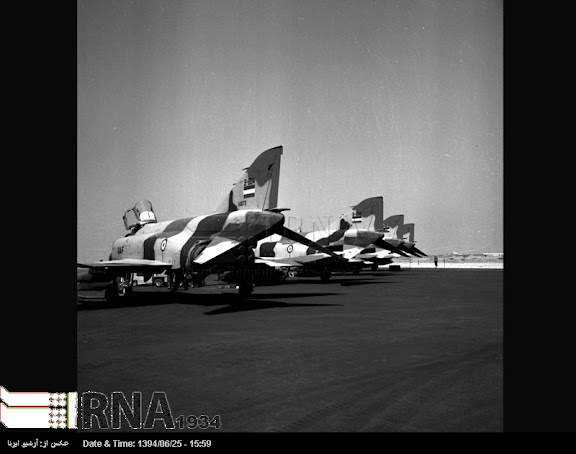 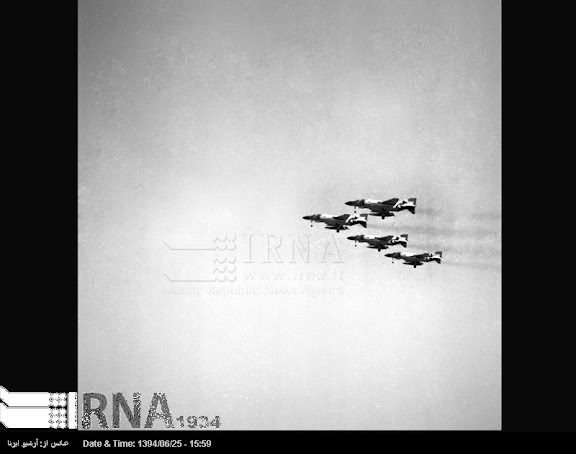 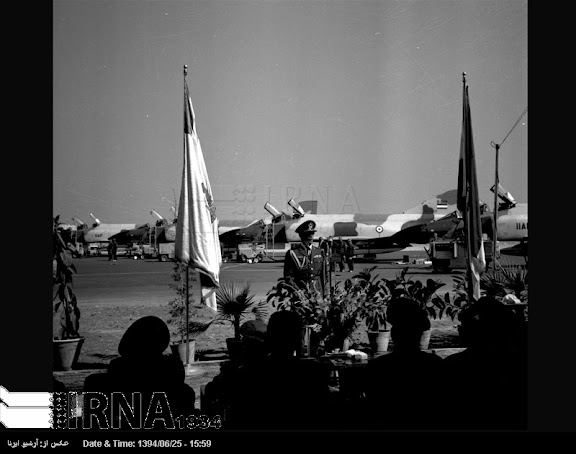 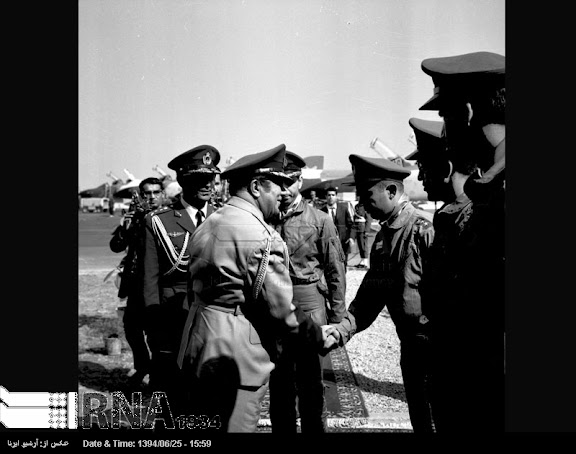 While serving as an officer of Imperial Iranian Air Force, a declassified  CIA report claims that Khatami accumulated a personal fortune of $442 million in today's money. Fortunes such as these amassed by family members and close associates of the shah factored into popular outrage, culminating in the 1979 revolution and subsequent establishment of the Islamic Republic. 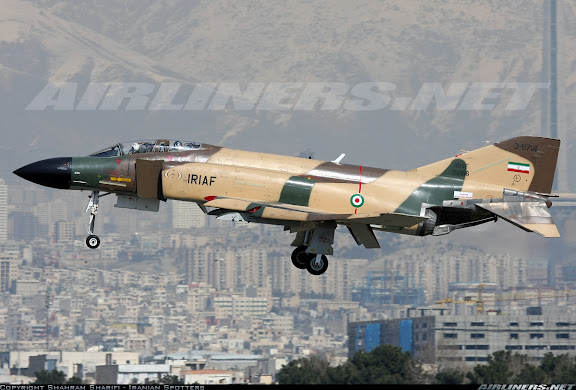 Iranian F-4D aircraft as it appears today remaining in service with Islamic Republic of Iran Air Force
[photo: Shahram Sharifi]
Posted by Mark Pyruz at 5:39 AM

I was in Tehran when Gen. Khatami was killed in a kiting accident. I recall it shocked family members.

The last photo is of F-4D upgraded to "Dowran Phase I" specifications, during a flight in 2012.

Iranian aeronautical engineers must be appreciated for antiquities are still flying. Rizvi/India

No other 3rd generation aircraft can ever match the F-4 Phantom in durability and versatility. Iranians indeed mastered this aircraft and it is a tribute to the maintenance and flying crew to keep these venerable warriors of the Persian skies operable for almost 50 years. It is time to get some SU-35 as replacements.

At least they did a lot of things for the country. what did these mullahs do ?
They took all the money but nothing to show. aging airforce and navy, dating back to cold war technology with some localized improvements here and there

thy did a lot of thing for themself.
the shah generals got a lot of brbe and money for this deals.
a weak Armee which is total dependent from American

they did a lot for themself
the shah generals got a lot of bribe money for arm deals.
a wek armee total dependend from american.
Iran Armee is dependend on nobody , maintain and modernize all their equipment by themself
the iran missile forces is very good

Let's not kid ourselves with fantasy dreamworld statements. Iran army is wholly outdated. Irans air force , army and navy combined used to be the 5th most powerful force in the World and none of Irans neighbours dared to attack such a force. Akhoonds threw it all right in the gutter. No serious logical thinking individal would compare this Akhoond era to the Shah era...Everything was vastly better during Shahs rule, social life, economy, military etc. Akhoonds regime is an evil mafia corrupt to the core.

Dear Anon 11:00
I tried to googlize the term "Persian sky" , but all I could come up with was Persian cat,persian rug and Persian miniature paintings .Please enlighten us on the geographical proximities of Persian sky . thanks .

Dear Anon 11:00
I don't what you were referring to when you mentioned Persian sky in your comment , however I think you raised a very interesting question though . During its war with Iran , Saddam's air force , artillery and rockets were able to target and hit every major Iranian city and municipality worth its name ,with a notable exception of one city .Can you name that major city that appeared to be wholly immune from wrath of Saddam's forces ? Whatever mysterious forces who were defending the patch of sky over that city in Iran , did a good job thwarting Baathi air and rocket forces .Any suggestion ?

I agree with you...but the interesting point is that in the middle of the worst region in the world...nobody dares attacking Iran despite having not being an ally of US or Nato...so it is quite amazing...outdated military but no one dares to attack, nice combination :-)

If as you claim the "shah generals got a lot of bribe" then I wonder what huge thefts the mullahs generals are taking? You should thank "the shah generals" for taking that bribe to buy the best fighter planes in the world,because if it wasn't for them Iran wouldn't even have an air force today.

the gretest arm deal is the S-300 from Russia, Iran do every thing by themself

why we sahould thx shah for buying air planwe and receive the bribe money ?
maintain a air dorce is duty of state not a favor to the people
IRI' Buys also MIG and suchoy

Why your country so big percentage of poor people despite the 'recognized' democracy by your western sponsors ??

AnonymousSeptember 19, 2015 at 10:19 AM
You mean like saddams iraq had the fourth largest army in the world?,on paper at any rate.Its funny that despite iran on paper having the "5th most powerful force in the World" it was only able to achieve a stalemate with saddams forces,despite on paper having the best airforce in the region it wasnt able to attain even air superiority over the much inferior iraqis let alone air supremacy.The problem was that the pahlavi era military was crippled with the almost exact same problems as the arab militaries,ie corruption,incompetence and the fact that a great many of its leaders were chosen for political reasons or simply because they were loyal to the shah rather than for any actual military ability.The irony is that today iran is seen as having one of the most formidable militaries in the region despite spending far less than its neighbors so iran must be doing something right plus the fact that the arab militaries just arent taken very seriously,I mean look at the saudis and co in yemen.Just because irans military may no longer on paper be the "5th most powerful force in the World" does not mean that it isnt still a force to be reckoned with,after all one only has to look at how well the iranian trained and equipped hezbollah performed against the israelis back in 2006 to see that.

Anon 7:09 PM
Correction,the mullahs have performed all thefts possible within the last 36 years.Puts the "shah generals" to shame.

Unfortunately that is the sad the truth. The mullahs have ruined the professionalism of the Iranian military and none of the current crop of generals is educated and able to read or speak English, French or German which is the lingua franca of business, science and technology. Iran does not have a senior officers staff college with access to global technical journals, publications and manuals. Iran also has no overseas intelligence service with trained technocrats capable of deciphering global strategic and technological trends. No country is going to take these buffoons seriously. They will blow the narrow window to buy modern technology from Russia and China due to their bazaari mentality of haggling, corruption and ignorance. Iran will have no serviceable aircraft left in about 5 years as these museum pieces won't even be able to be towed let alone engine ignition.

The Shah was an avid reader, a pilot and educated in the west and regularly read publications on Space and Aviation technology and often overruled generals on military purchases based on his own knowledge and experience. The F-14A and F4E Phantom purchases were entirely the Shah's decision and rightly so. Now the "generals" are largely illiterate and ignorant clowns like Soleimani and Firouzabadi who have not even completed high school and run on bombast. Indians and Pakistani have highly professional armies with an advanced intellectual military infrastructure like world class military academies, airforce combat commanders schools, command and staff colleges and above all, English speaking diplomatic and intelligence services integrated with the west, Russia and China. Iran is wallowing in isolation and inferiority, thanks to the Akhoonds. Heavens help Iran indeed.

"No country is going to take these buffoons seriously"
Then why are the gulf states despite spending billions on weapons so afraid of iran?,why did israel and the us despite all their threats decide not to try their luck and attack iran?,it seems to me that the region and the west take iran and its military capabilities very seriously indeed and they would be very foolish not to.

Anon 9:29 PM
You have correctly pointed out all the problems that is facing our country.I couldn't have said it better myself.

Generally speaking our airstrikes covered more than half of Iran. Several Iranian cities or towns could not be reached and thus were spared from air raids. One being Mashad in the North-East close to Turkmenistan and the other was Zahidan to the South-East near Pakistan.