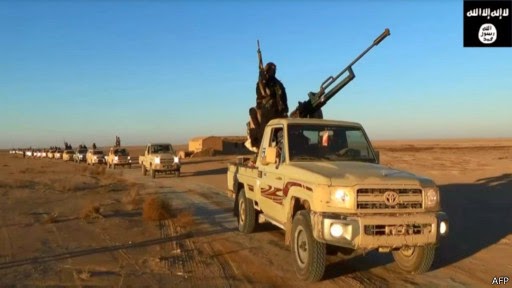 In a lightening and well-planned three-day offensive, the ISIL forces have advanced to within 60 miles north of Baghdad. The latest town to fall is Dhuluiyah, AFP reported.

The militants had to bypass Samarra to capture Dhuluiyah. In Samarra, the historic city 80 miles north of Baghdad, ISIL faced the first serious resistance by the Iraqi security forces and their allies, where heavy clashes took place overnight and the militants were repulsed.

To the west, ISIL militants also engaged security forces in Abu Gharib and Zeidan, some 25 miles west of Baghdad and its airport. ISIL is showing its capability to manage a two-front attack against Iraqi security forces.

Photo credit: Above, an AFP photo showing the ISIL’s ability to put together a motorized formation with equipment captured from Iraqi security forces. (AFP/Twitter, 12 June). Below, American-made ISF Humvees and tank captured by ISIL. (Twitter, 12 June) 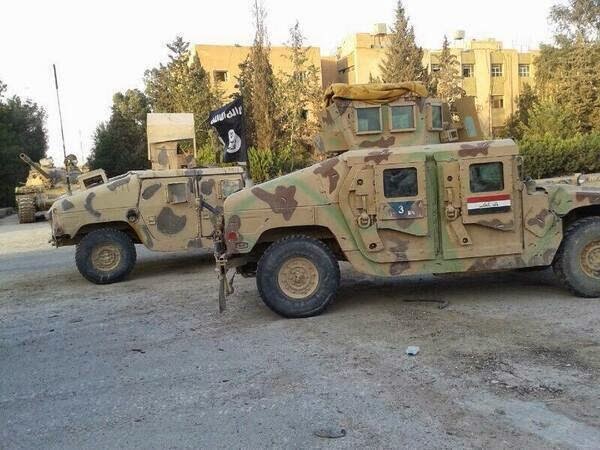 ISIS may hos 10-20,000 Fighters
that is not mucht against Irak Armee, with the Support of Iran ans maybe USA the Irak Armee will force the terroist back to the Desert.of Al Anbar and Fallluja

That is the last Sunni Upraising against Irak Shia Government., after this is finished, they can not do much more

What's sad about the pictures is all of the advanced cars and other signs of economic prosperity. Iraq looks like UAE in these pics.

Quite sad that its army is so cowardly. How the hell did these people ever beat Iran and Kuwait into submission?
Makes the US invasions of that country seem not so impressive.

But at the end of the day, there is way too much money invested by big businesses in Iraq. You'll see this insurgency crushed like the LA riots in 1991.

The wall street journal reports that 2 battalions of the Quds force helped the Iraqi army retake 85% of Tikrit and has now virtually halted the rapid advance of ISIL.

This was based on a report by Times of London, and it could very well be true. Although no other independent sources have yet confirmed it. The situation is quite fluid, and could still turn against ISIL. What's troubling is the low morale of the Iraqi military, ready to shed uniform and flee the scene without putting up a fight with advancing militants. The troops even fled Kirkuk before the ISIL could even get there, resulting in Peshmerga forces pouring into the city and take full control.

There's simply no comparison between the Iraq of today (Arabs have been bought off and split into factions) and the Iraq of 1980-1991 (Shia and Sunni Arabs were united). The atmoshpere of the previous era was that of national pride and dignity which permeated through every part of Iraq. Now everything is totally sectarian and the loyalty/allegiance of militias is towards outsider players, like puppets on strings. Iraqi Arabs have mostly themselves to blame for allowing outsiders to have a stake in their sovereignty and giving those very same regional actors the opportunity to poke fingers into their internal affairs. We could not withstand the US forces, (+ a multitude of other nations that contributed soldiers and machines for the assault that drove us out of Kuwait and went on to push into Iraq) in 1991, even though we had the 4th largest military in the world, but we could easily hold up and defeat any attack from any surrounding country. Only the US armored forces had the skill and capability to breaktrough, penetrate deeply, and deliver a decisive blow. US blitzkrieg tactics (pure armored spearhead) stood in stark contrast to the slow, wide front, and easily predictable warfare on the part of the Iranians, which was reminiscent of WW1. Not to forget the capacity of the Iraqi army engineer corp which were real masters in constructing defensive lines in the East of Iraq running up to Irans first offensive in 1982. Nothing of this sort can be seen now in the North or the West, as the current crisis unravels. Our defensive tactics were solely based on Soviet defensive measures. The Soviets had teached our army engineers well. The Americans cannot teach any such thing to our army because in any armed conflict that they entered into (excluding the American civil war) they were never forced on the defensive (never having to repell an enemy on US soil), instead they always advanced towards the enemy. This was pretty much the case in any theather of war that they participated in during the 1900s, performed much better on the offense than on the defense. The Soviets on the other hand were pushed into developing defensive strategies on the battlefield, both during WW 1 and WW 2.