Emir of Kuwait in Tehran 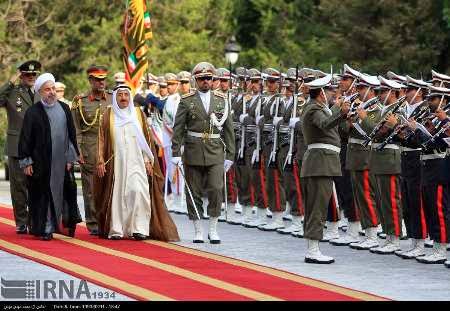 Kuwaiti Emir Sheikh Sabah Al-Ahmad Al-Jaber Al-Sabah arrived in Tehran today on a landmark visit, the first by a Kuwaiti ruler since the 1979 Islamic revolution.

Iranian President Hassan Rouhani welcomed Sheik Sabah during a formal ceremony. Since he came to power, Rouhani has been seeking to end decades of hostile relations with the Arab states of the Persian Gulf. Kuwait also is home to a significant Shia minority.

Very good Iran is breaking the ice with the rick small Arab states. Their financial power is of interest to Iran,hopefully the cooperation will be extensive.

https://www.youtube.com/watch?v=Er7v-sYusAA --- The emir is drunk during the ceremony

No, he was not. He's ill and has not much control walking or going up the stairs. He really didn't have much control that day. Look at Rouhani's face, he's concerned and scared looking at the Emir. He probably should not make foreign trips until he's better.