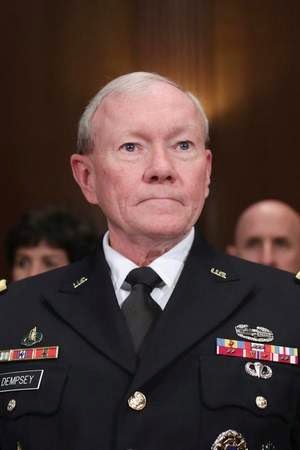 “We have a request from the Iraqi government for airpower,” Dempsey said. (Defense News, 19 June)

The Pentagon has basing arrangements with numerous countries throughout the Middle East, including Qatar and the United Arab Emirates. Dozens of Air Force fighters, tankers, bombers, transports, and an array of UAVs are already based or rotating through the region, Defense News reported.

Meanwhile, officials told Fox News that the U.S. is already flying surveillance missions over Iraq an aircraft carrier in the Persian Gulf.

President Obama on Wednesday met with top Congressional leaders to review the U.S. efforts to “strengthen the capacity of Iraq’s security forces to confront the threat from [ISIL], including options for increased security assistance,” the White House said. (AP/Fox, 18 June)

Obama is also pressing the Iraqi government to become more inclusive and bring in broad Sunni participation in the affairs of the state. Observers are generally skeptical that Maliki could form a unity government after eight years of divisive and sectarian rule.

“If you ask me did I take a real power-sharing during my presence in the government, I say definitely no,” al-Mutlak told CNN’s Christiane Amanpour from Baghdad. “We were almost isolated from the decisions, especially regarding the security issue.”

UPDATE: U.S. Secretary of State John Kerry said the United States is interested in communicating with Iran on the crisis in Iraq.

“We are interested in communicating with Iran. That the Iranians know what we're thinking, that we know what they're thinking and there is a sharing of information so people aren't making mistakes,” Kerry said in an interview with NBC News. (NBC, 18 June)

By comparison, U.S. tactical airpower responded at the inception of the 1972 Easter Offensive in Vietnam.

Also by comparison, the U.S. tactical bombing of Afghanistan during Operation Enduring Freedom began 26 days after the 9/11 attacks.

Iraq's Maliki: I won't quit as condition of US strikes against Isis militants

reminds me of when Nixon said that he was not a crook.

it's an excellent article and it makes clear that Maliki is loathed by all factions of the American government.