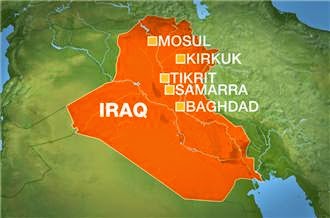 Islamic State of Iraq and Levant (ISIL) militants overran the Iraqi city of Tikrit today, only a day after they captured Mosul. “All of Tikrit is in the hands of the militant,” a police colonel told AFP. A police brigadier general told AFP that fighters attacked Tikrit from the north, west and south of the city, and that they were from ISIL. (AFP/Al Jazeera, 11 June)

AFP, quoting a police officer, reports that the militants had freed 300 inmates from a prison in the city. Yesterday, ISIL freed more than thousands of prisoners in Mosul.

In Mosul, ISIL looted 500 billion dinars ($429 million) from city's branch of Iraqi Central Bank, making it one of the world’s richest terrorist groups.

Never before has the situation been as dire as it is now. The entire Iraqi government is in peril. A similar scenario played out back in 2008, but Al-Qaeda was succesfully stopped and driven away with the help of significant assistance from US troops. The future of Iraq hangs in the balance.

Major urban centers to have fallen:

Major cities that are still contended but are at risk of falling:

The situation is finished Alghaeda managed to defeat George Bush and Khamenei together and will soon take over Karbala and Najaf. ISIL is the future Khamenei is the past......

Ratio of terrorists to army men was 1 to 15. When they were attached they drop their guns and run away. What a brave army!!!!!!!!

as farsnews reported tikrit is in hand of iraq armee ?